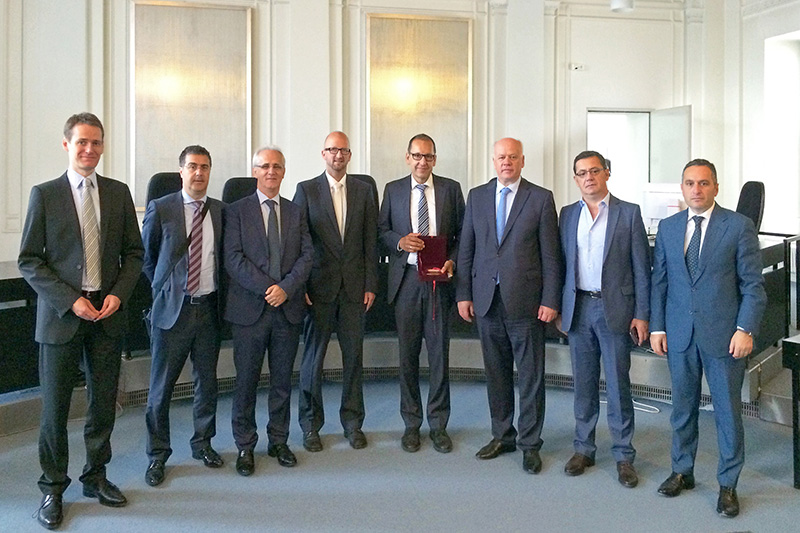 Visit to the Karlsruhe Regional Court by a delegation headed by Professor Xhezair Zaganjori (3rd from right), President of the Supreme Court of Albania

The Republic of Albania was granted official EU-candidate status in June 2014. In July 2016, the Albanian Parliament ultimately accepted the long-debated draft legislation for amendments to the Constitution, which paves the way for numerous statutory amendments and a comprehensive judicial reform. The new Constitution will not only create new judicial institutions; the judicial reform is also designed to counteract the continued existence of corruption in the country. One important aspect of the reforms therefore also affects the project for strengthening the confidence of the population in the government and the judicial system, which has been damaged amongst other things by widespread corruption. The passing of the constitutional amendment by the Albanian Parliament was welcomed internationally and can be regarded as an important step by Albania on the path towards the EU. Amongst other things, the EU had pointed out to Albania that the judicial reform and other reform steps constitute a central precondition for the start of accession negotiations. The EU progress report for 2016 particularly welcomed the laws which have already been passed on the reorganisation of the judicial system and the project to introduce a vetting law to examine the reliability of judges and public prosecutors. This law introduces an examination of the personal suitability and income circumstances of the judicial officers and a finding of whether or not they have connections to organised crime. The first vetting examinations are expected to take place at the start of 2017.

On a regional policy level, the country has increased its endeavours towards good relations with neighbouring countries and constitutes an important partner in the establishment of joint security and economic structures in the region. Although Albania is still one of the poorest countries in Europe, the current prime minister Edi Rama is leading intensifying measures to promote foreign investment.

The IRZ has worked together with the Republic of Albania since 2000 and has conducted events in this context in the fields of the organisation of the judiciary and of legislation, as well as basic and further training for lawyers. In this regard, support for the Albanian Ministry of Justice in the course of the EU-funded EURALIUS und EURALIUS II projects formed a focus of the IRZ’s work in Albania from 2005 to mid-2010. Following on from this, the IRZ has taken the lead in the Grant Project EURALIUS IV, likewise funded by the EU, in order to support and advise on the judicial reform (see report on this project) since September 2014. In addition, the IRZ was able to further develop numerous bilateral activities with important partners in Albania, including the Ministry of Justice, the Constitutional Court, the Supreme Court, the General Prosecutor’s Office and the School of Magistrates in recent years, whereas the basic and further training of lawyers forms a special focus here. Since administrative judges started work in Albania for the first time in 2013, support for the introduction of the administrative jurisdiction in Albania plays a special part in the IRZ’s bilateral work in Albania.

In 2017, the IRZ will continue its cooperation with the Constitutional Court, the Supreme Court and the School of Magistrates in Albania. En-quiries have already been submitted for seminars and a study trip which follow on from the events of previous years. The planned study trip for Supreme Court judges will take place after the seminar in 2016 entitled “Introduction to administrative court procedure in Germany” and will involve visits to the Federal Administrative Court in Leipzig and the Higher Administrative Court in Bautzen. In addition, the IRZ will concentrate on the further implementation of the EU Project EURALIUS IV in 2017.