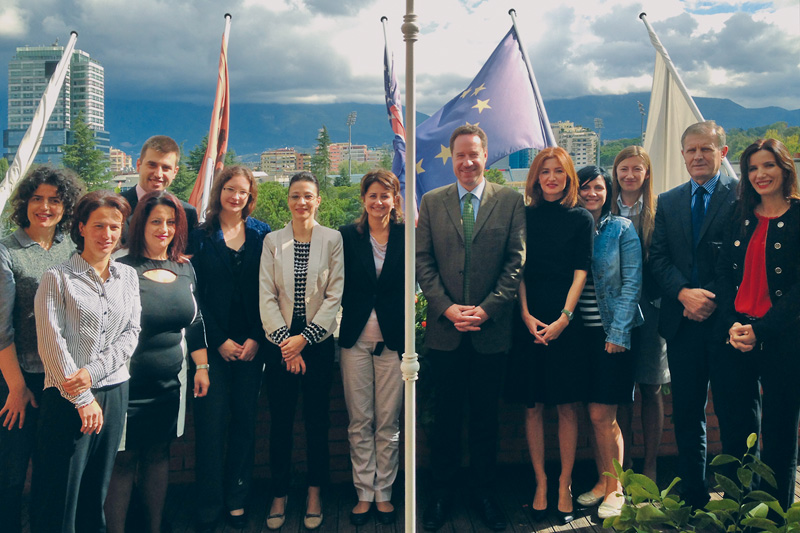 The reform of the legal and economic systems poses a particular challenge for the Republic of Albania because of the country's political past. This process has undergone some setbacks. In particular the civil war-like unrest in 1997 can be mentioned here. The reform process reached a new phase when the Stabilisation and Association Agreement with the EU came into effect and Albania submitted its application for EU membership in April 2009. However, further progress needs to be made on important reforms in Albania before the EU can grant Albania official candidate status. This must also take place regardless of the fact that Albania has now achieved success in both economic and political terms. These reforms particularly relate to the fields of public administration, the judiciary, corruption and organised crime as well as human rights.

The IRZ has been operating in Albania since the spring of 2000 within the German contribution to the Stability Pact for South Eastern Europe. Since then, the IRZ has been offering events and consultation on the organisation of the judiciary and in the field of legislation, as well as providing basic and further training for lawyers in various legal fields. In this regard, support for the Albanian Ministry of Justice within the EU funded EURALIUS and EURALIUS II projects formed a focus of the IRZ's activities in Albania from 2005 until mid-2010. The large number of bilateral activities with important partners in Albania, including the Ministry of Justice, the Constitutional Court, the Supreme Court, the Office of the Public Prosecutor General, the Judicial Academy and the Chamber of Notaries, should also be stressed. In 2013, the IRZ particularly emphasised continuing and intensifying cooperation with the Constitutional Court and the Judicial Academy which has been in operation for more than ten years.

Since the completion of the EU-funded EURALIUS II project in June 2010, the bilateral activities of the IRZ have been more important still, particular focus being placed on the basic and further training of legal experts. The IRZ particularly intensified cooperation with the Constitutional Court and the Judicial Academy in 2013. Administrative law will be a topic of particular interest in 2014. This is because the Albanian Parliament adopted the Act on the Administrative Courts in 2012, and first-instance and second-instance administrative court judges have now been appointed, taking up their posts in 2013. The plans for 2014 also focus on events regarding the awarding of official candidate status by the EU.

The IRZ would particularly like to continue its cooperation with the Constitutional Court and the Judicial Academy in 2014. Both institutions have already submitted concrete enquiries regarding, amongst other things, seminars and workshops, which build on the previous year’s activities. The IRZ is also planning to engage in cooperation with the Supreme Court, the Office of the Public Prosecutor General and the Ministry of Justice.