Launch of the EURALIUS V project in Albania

On 13 June 2018 the EC-funded Project EURALIUIS V kicked off in the “Europahouse” of the EU Delegation in the capital of Albania, Tirana. Participants were Mr Christian Lange, State Secretary of the Federal Ministry of Justice and Consumer Protection, Ms Etilda Gjonaj, Minister of Justice, Ms Romana Vlahutin, Ambassador of the EU Delegation to Albania, as well as all Member States Ambassadors and representatives of the Albanian Judiciary.

In March 2018 IRZ successfully concluded the predecessor project EURALIUS IV and fortunately the tender procedure for EURALIUS V turned out to be successful so that EURALIUS V was awarded to the IRZ-lead consortium. Consequently, since 1 April 2018 IRZ is continuing its work in Albania as regard the justice reform, which is ongoing since Autumn 2014. The total contract value of EURALIUS V is EUR 7,5 Mill., the duration is 36 months. A team of around 40 staff and experts is budgeted of which most team members could be already contacted. IRZ very much appreciates to be able to continue a very well-established cooperation with Dr. Agnes Bernhard as Team Leader, who hold this very position also under EURALIUS IV.

Consortium partners - apart from those who were already partners in the predecessor Project EURALIUS IV – are namely the “Centre for International Legal Cooperation” (CILC/NL), the “Agency for Economic Development” (AED/A) and as new member the „Consiglio Superiore della Magistratura“ (CSM) from Italy.

EURALIUS V is tasked to further support the overall consolidation of the ongoing justice reform. With regard to the establishment of the new justice institutions, which resulted based on the new constitution and the subsequently thereafter adopted relevant legislative packages, the initial time plan could so far not be implemented due to diverse reasons. Thus, the start date of EURALIUS V comes at a very sensitive phase as the establishment of new justice institutions and the continuing of the implementation of the justice reform is predetermined to a major extend by the ongoing vetting procedures.
It is also to be expected, that the decision about the potential opening of the EU-accession talks with Albania to be decided on the occasion of the EU Summit to take place on 28/29 June 2018 is going to have a major impact on the overall justice reform efforts as well as on the pace of the reform.
With a highly motivated team under excellent leadership IRZ will further contribute valuable support to the highly challenging but interesting justice reform in Albania, which is being regarded as historic.

Seminar on appraising evidence in Tirana 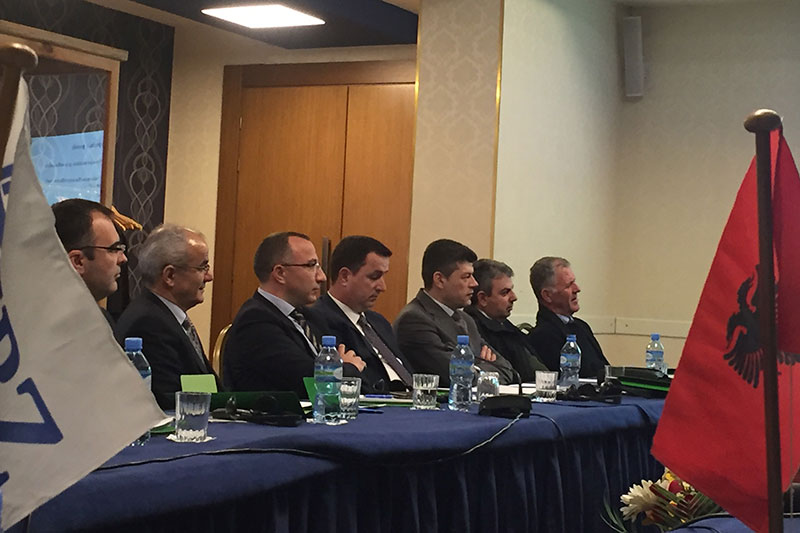 The IRZ began its bilateral cooperation with Albania this year with a two-day seminar on appraising evidence. Organised together with the School of Magistrates, the Albanian training institute for people working in the justice system, the seminar held on 26 and 27 March 2018 brought together about 25 public prosecutors and judges to discuss the appraisal of evidence, the analysis of testimony and lessons in questioning.

Dr. Friedrich Kies, a judge at the Higher Regional Court of Schleswig-Holstein, reported on the truthfulness of witness statements, presented the basics of analysing testimony and rounded off the discussions on the second day with specific features of the examination of witnesses, such as questioning techniques and the involvement of interpreters in the questioning process. From the Albanian side, lecturers at the School of Magistrates, Sokol Berberi, Vangjel Kosta and Ervin Metalla, gave presentations on the relevance and credibility of evidence, and on the collection of evidence in civil and criminal proceedings.

Group work was carried out based on genuine Albanian cases, during which the participants had to reverse roles, discussing and arguing the relevance of the evidence provided. The topics discussed during the seminar were on the curriculum at the School of Magistrates for the first time this year and were therefore extremely popular.

The IRZ will continue its cooperation with the School of Magistrates, which began back in 2000, with further training seminars planned for 2018.

Seminar on asylum law in Tirana

In the first week of December 2017 a two-day seminar on asylum law took place in cooperation with the Supreme Court of Albania.

After the opening of the seminar by the IRZ and Ardian Dvorani, Judge at the Administrative Division of the Albanian Supreme Court, first a presentation on the history and development of asylum law in Albania was given, which also provided an insight into the current challenges in the country. Asylum is a topic becoming also increasingly relevant in Albania and confronting the country with many new challenges.

The two German experts could report from their practical experience, which made the presentations very hands-on and led to a lively exchange between the participants and the German side.