Presentation of a handbook for lodging constitutional complaints in Albania

The constitutional complaint, which was introduced in Albania in March this year, was developed according to the German model and its legal structure has received a great deal of support from the IRZ in the past. This advice was followed in November by another important element, with the publication of a handbook.

The book entitled “Die Verfassungsbeschwerde – ein Handbuch aus deutscher und albanischer Perspektive” (“The constitutional complaint – a handbook from the German and Albanian perspective”) was presented to a very interested audience of experts on 17 November 2017 in Tirana.

The handbook is therefore divided into two sections. The first section introduces constitutional complaints in Germany, including their legal framework conditions and specific features. The second part of the book presents constitutional complaints in Albania. Both sections are not just restricted to classification according to legal doctrine, but also provide the basis for practical and immediate application by readers thanks to assessment methods, case examples and the listing of legal standards.

The book was co-written by German and Albanian authors. The author of the German section is Professor Dr. Jan Bergmann, President of the Senate at the Administrative Court of Baden-Württemberg. The author of the Albanian section is Dr. Arta Vorpsi, a legal consultant at the Constitutional Court of the Republic of Albania. Both authors have long been active in IRZ projects.

The 60 or so participants in the event included judges and expert employees from the constitutional court. Many Albanian lawyers also attended the book presentation.

The plan is to hand out the book to judges and to lawyers. University libraries in Albania should also be supplied with the handbooks so that future legal practitioners can also familiarise themselves with the legal institution of constitutional complaints.

The target groups for this event, which was financed by funds from the German Federal Ministry of Justice and Consumer Protection were:

Dr. Stefan von der Beck, Presiding Judge at the Higher Regional Court of Oldenburg, spoke on behalf of the IRZ. The speakers from the Albanian side were Dr. Idlir Peçi, a former Deputy Minister of Justice and acting Deputy Minister of Defence, and Elira Kokona, representing the Ministry of Culture.

Using selected cases, they discussed ECtHR case law, in which article 6 of the ECHR plays a significant role, with the law professionals.

The speakers also shed more light on research work with sources, in particular research on relevant ECHtR sites (“HUDOC”) and gave some practical tips for using these sources. 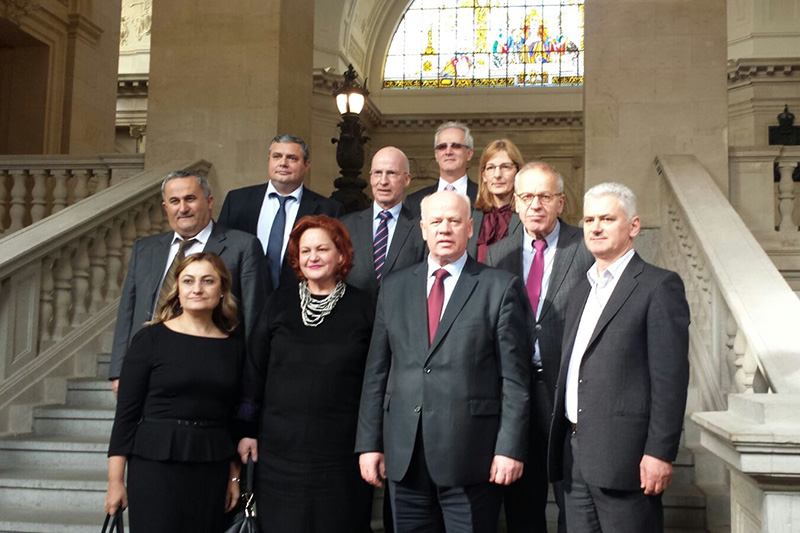