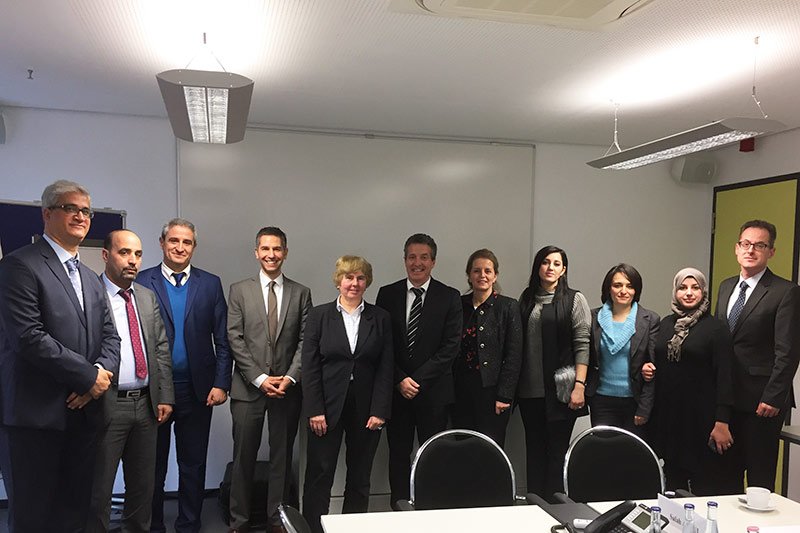 Expert discussions at the German Federal Ministry of Justice and Consumer Protection with Ministerialrätin Sabine Hilgendorf-Schmidt (5th from left), Head of Division R B 6 "Law on Judges; Law on Judicial Officers; Remuneration Judges; Education and Training"

From 4 to 8 December 2017 the IRZ welcomed a delegation of representatives from the Algerian Ministry of Justice and the Algerian Judicial Training Institute to a study visit in Berlin for the first time dealing with "Education and Training of Judges in Germany".

The delegation had expert discussions at the Federal Ministry of Justice, the Wustrau conference centre of the German Judicial Academy (DRA), the Local Court of Berlin-Tiergarten and the German Association of Judges.

During the meeting at the Ministry of Justice, the guests were provided with detailed information on the following topics:

At the German Academy of Judges, the delegation learnt about the Academy's tasks and activities as judicial training institution at federal government level and about the activities of judicial academies at federal states level. This included the involvement of the federal government and the federal states in the German Judicial Academy as regards financing and defining and implementing the curricula in the respective training programmes.

The meeting at the Local Court of Berlin-Tiergarten covered the Court's internal organisation, the professional practice of judges, the tasks and role of the Court's council of judges representing their interests, and the further training of judicial staff.

In all discussions, information about the recruiting of qualified young legal professionals for the judiciary and questions dealing with the official supervision of judges were in the Algerian guests' focus of interest.