On 7 and 8 May 2018, the first working group meeting was held as part of the IRZ project to support the reforms of the Algerian prison system. The main focus was on the “Humane treatment of prisoners upon admission” and “Individual enforcement plan and classification”. From 2017 until 2019, the project is being supported by the German Federal Foreign Office and the German Federal Ministry of Justice and Consumer Protection.

To ensure that the project is led in a practice-oriented and needs-based way, the decision was made to establish four working groups. These will develop handbooks and recommendations for the Algerian prison system throughout the course of the project.

On the first day, the members of the working groups visited two penal institutions, where they were given an insight into the closed prisons for male and female prisoners and the medical department. On the second day, the focus was on working in small groups. On the subject of admission, the humane treatment of prisoners during the admission process was discussed in particular. This was mainly about the collection, administrative registration and evaluation of prisoner information and the role of medical and psychological staff in this context. On the subject of the classification of prisoners, the focus of conversation was on diagnosis and the related establishment of an enforcement plan.

Both the Algerian and the German participants took part in lively discussions and were extremely interested in more in-depth exchanges. The project will be continued with a study visit to Düsseldorf on the same subjects in July 2018. 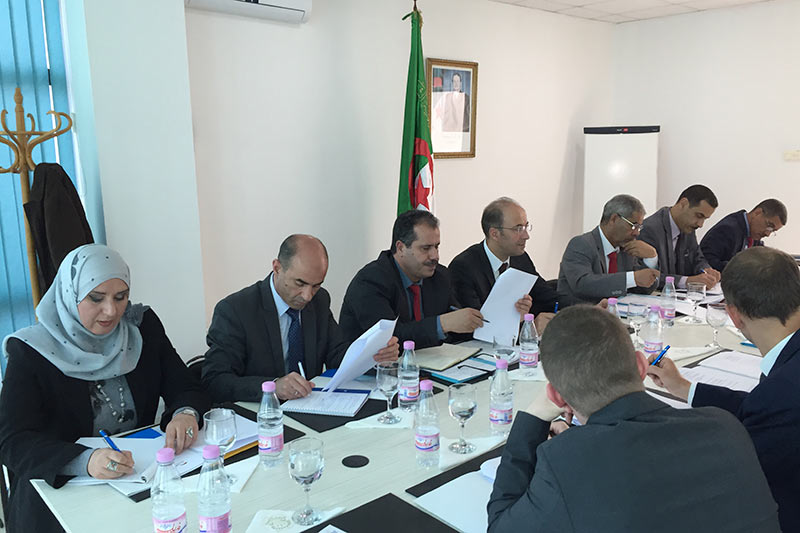 On 8 April 2018, the first meeting of the reform commission for the Algerian prison system was held in Algiers. The commission was set up in December 2017 as part of the IRZ project for supporting the reform of the Algerian prison system . From 2017 until 2019, the project is being supported by the German Federal Foreign Office (AA) and the German Federal Ministry of Justice and Consumer Protection (BMJV).

The objective of the meeting was to plan and develop the next steps for the project. The project is being led from the Algerian side by the Director of Prison Services, Mokhtar Felioune. The IRZ was represented at the meeting by Dr. Stefan Cassone and Andreas Illerhaus from the Ministry of Justice for the North Rhine-Westphalia region of Germany and Kai Abraham from the Berlin Senate for Justice, Consumer Protection and Anti-discrimination.

The Algerians have also expressed a wish to include the continuous training of prison staff as an additional focal point.


The cooperation in working groups should guarantee that the project fulfils as many requirements as possible. It should allow the experts to address the actual requirements for reform in Algeria and develop target-oriented recommendations. At the end of the project, a handbook and recommendations for staff working in the Algerian prison system will be produced.

The Algerians expressed a keen interest in an exchange with the German prison system and appear to be taking the reforms that have already been introduced very seriously. The next event planned for this project is due to take place in Algiers in May 2018.

From 11 to 16 December 2017 the IRZ welcomed the first delegation from Algeria in Berlin to discuss the “reformation of the prison system and the resocialisation of prisoners”. The study visit was part of the new tandem project on the prison system between the German Federal Ministry of Justice and Consumer Protection (BMJV) and the German Foreign Office (AA).

During their visit, the participants of the delegation, among them the Head of the Algerian prison authority, Mokhtar Felioune, learnt about the German prison system with a special focus on resocialisation programmes and the reintegration of prisoners.

Algeria has been carrying out major reforms and modernisation measures in its penal system for some years now, building, for instance, several new prisons and investing in particular into setting up training and resocialisation programmes.

Therefore, the visit provided an opportunity both for the Algerian and the German side to exchange experiences and discuss joint challenges such as the de-radicalisation of prisoners.

After this successful kick-off, the IRZ will continue to support the Algerian reform efforts as part of the BMJV-AA project in the following years.