The opening conference on the “@MediaSocieties – Armenia 2019“ project took place in Yerevan on 15 July 2019. The event was attended by about forty participants and covered topics such as transparency, good media governance and journalistic ethics. The Permanent Representative of the Ambassador of the Federal Republic of Germany in Armenia, Klaus Wendelberger, also took part and opened the event. Welcome addresses were also given by Amalia Wuckert for the IRZ and Boris Navasardyan as President of the Yerevan Press Club (YPC). Thomas Wierny, who supports the project as an expert in media and press law, moderated the conference, presented the project concept and gave an introduction to the expert sessions.

Further speakers at the conference were:

During the final panel discussions, the experts Mesrop Harutyunyan, Prof. Dr. Bernd Holznagel, Prof. Dr. Hektor Haarkötter and Boris Navasardyan exchanged their views regarding the particular responsibility of the media in times of election campaigns. 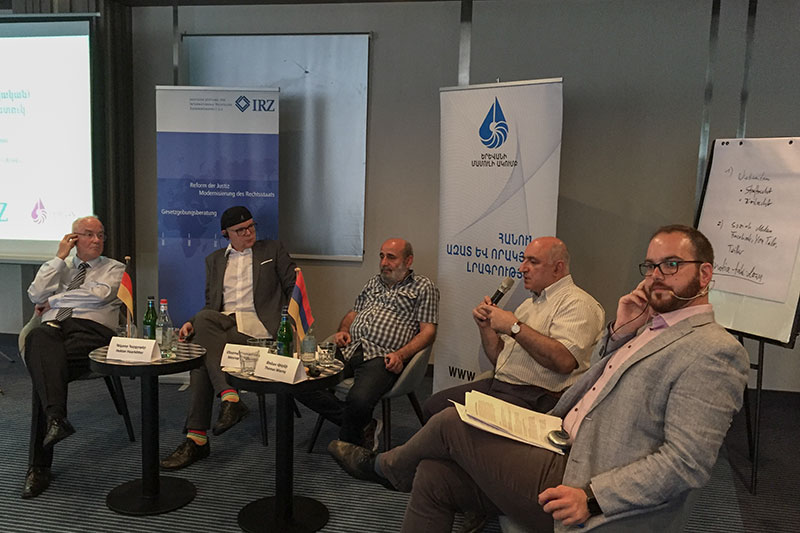 The conference met with a great deal of interest by media professionals. The participants repeatedly pointed out the importance of this event for Armenia in the present phase.

The continuation of the project is scheduled for the fourth quarter of this year. At first, several subsequent workshops are planned, which will be attended by Armenian and German experts from various areas of media and media regulation to deal with these topics in detail. It is planned to compile the results of these workshops in a paper reflecting the current state of discussions and indicating in which way the new regulation should be directed in the participants’ opinion.

Following up on the workshops, a final event will take place at the beginning of December, where the draft papers will be presented to a larger audience for discussion. The aim is to debate the considerations and results also with those players who did not take part in the workshops, and to consult on the implementation of the concepts.

The “@MediaSocieties – Armenia 2019“ project is aimed at supporting the freedom and diversity of the media and pluralism of opinions in Armenia and at strengthening the journalistic profession. The project is financed by the Federal Foreign Office within the “Expanding Cooperation with Civil Society in the Eastern Partnership Countries and Russia“ programme.

The project addresses media professionals, players in the media market and the respective fields of science in Armenia.

The target groups are:

Thomas Wierny, an expert in the field of media and press law, supports the preparation and implementation of the project.