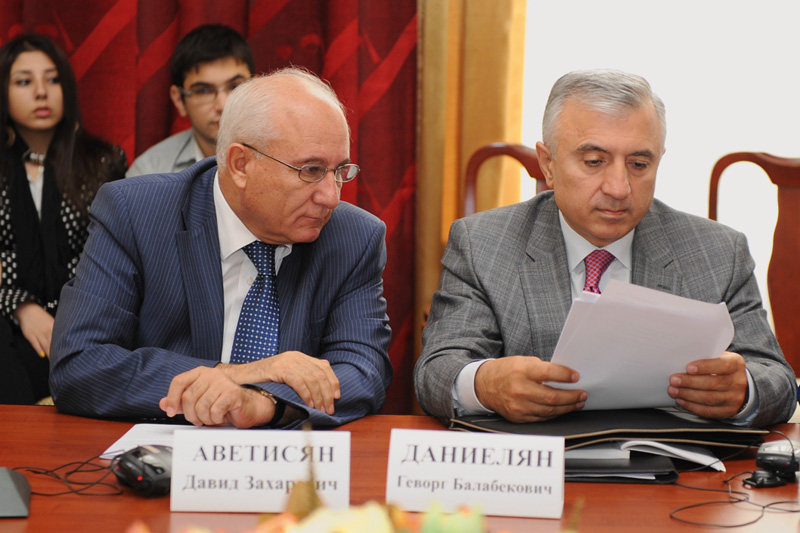 David Avetisyan, President of the Criminal Chamber of the Court of Cassation (on the left) and Gevorg Danielyan, advisor to the Constitutional Court, on the occasion of the International Conference of the State University of Yerevan

Presidential elections took place in Armenia in February 2013. President Sersch Sarkisjan was re-elected, as had been anticipated. Since the parliamentary elections in May 2012, his party, the Republican Party of Armenia, has had an absolute majority in Parliament. In its reforms in the legal sphere, the Armenian Government continues to take as an orientation its reform strategy paper, which covers the period from 2012 to 2016 and provides for reforms in almost all legal fields. Armenia continues to find itself in a difficult economic and foreign policy situation. There is still considerable population emigration, primarily to Russia, Europe as well as the USA. Armenia also continues to suffer from its geographical isolation, caused by ongoing tense relations with its neighbours Azerbaijan and Turkey. Moreover, the international trade embargo on Iran hinders Armenia's North-South trade links. The meagre natural resource base furthermore means that Armenia is very largely dependent on gas supplies from Russia, which explains Armenia's accession to the customs union with Russia, Belorus and Kazakhstan in 2013. Armenia, which has been a member of the EU's Eastern Partnership since 2009, nonetheless repeatedly stresses its intention of achieving approximation to Europe and the European Union, and is making considerable attempts to tackle and indeed implement reforms towards Western standards.

Since beginning cooperation with Armenia in 2011, the IRZ has been able to organise a large number of events: further training seminars and local conferences, as well as several specialist discussions in Germany. The project work with Armenia is primarily characterised by the good, trust-based cooperation with various partner institutions from the judiciary and the further training system. Further partners have been added in the past three years, which makes it clear that the IRZ has successfully established itself in Armenia. All in all, the IRZ is orientated within its consultations in Armenia following the lines of the above mentioned reform strategy paper which the  overnment adopted in 2012. Major partners of the IRZ in Armenia are the criminal chamber as well as the Judicial Department of the Court of Cassation. The IRZ cooperated with the Court of Cassation, in particular in electronic court management. The IRZ is working with the Ministry of Justice on the reform of the Home Ownership Act as well as of the prison system. The Law Institute of the Ministry of Justice, responsible amongst other things for the further training of trainers in the prison system, is also a partner of the IRZ. The IRZ was able to further intensify its cooperation with AYLA on the European Convention on Human Rights (ECHR) and arbitration jurisdiction.

Constitutional law/human rights and their enforceability

The IRZ will continue to advise Armenia on the reform of criminal law as well as of the prison system in 2014 and intensify its cooperation with the criminal chamber of the Court of Cassation and the Ministry of Justice. The consultations on the development of a probation service concept for juveniles are also to be continued. The consultation and support of the new centre for the work on juvenile delinquents which was established in the Ministry of Justice at the end of 2013 will certainly be a focus here. It was unfortunately necessary to cease the extremely constructive cooperation with the Prosecutor's School in the recent years since it was dissolved at the end of 2013 and replaced by a newly-established national Judicial Academy which is to commence operations in January 2014. We have however already had talks with the newly-established Academy, so that the IRZ hopes to be able to gain a new cooperation partner here. The scope of the cooperation has not yet been defined, but will be in the field of basic and further training of public prosecutors as well as judges. The cooperation with the judicial department of the Court of Cassation in the field of the archiving of court files and the allocation of judges' posts is to be continued, as is cooperation with the AYLA, which has been running since 2010. It is planned with the latter to continue the summer school on the ECHR and on European law, which was carried out extremely successfully in July 2013. Furthermore, the IRZ has discussed various potential projects in the field of academic teaching with the Law School of Yerevan State University.