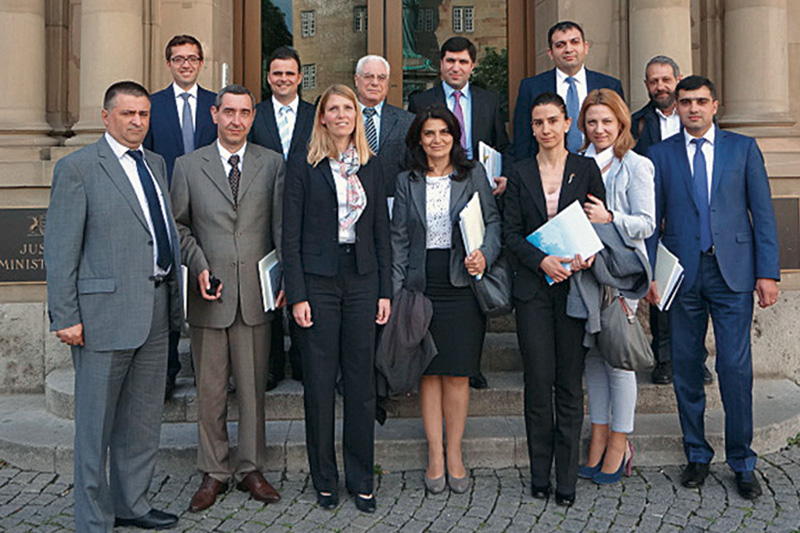 The signing of the country’s accession treaty to the Eurasian Economic Union (EAEU) in October 2014 was a considerable setback in cooperation between the EU and the Republic of Armenia. Armenian President Sersch Sargsyan particularly used security arguments to justify accession. Armenia has formed a security alliance with Russia and other CIS States which, in the opinion of the President, should be supplemented by an economic alliance. The country maintains a close relationship with Russia, which has troops stationed in the country as a “protective force” and is one of the country’s major trading partners. Armenia particularly receives its gas deliveries almost exclusively from Russia. Unlike its neighbour Georgia, the country thus decided against signing an EU Association Agreement, shortly before the actual signature. The EU considers membership of the EAEU to be incompatible with an EU free-trade agreement. The younger, Westernorientated generation, which is strongly orientated towards the values and content of European law, is especially sceptical with regard to this step. Accession to the EAEU does not however mean that Armenia is turning its back on Europe. On the contrary, particularly in recent years, fundamental efforts have been made especially in the criminal justice system to bring about legal reforms that are orientated towards the German system. Even following the resignation of the Prime Minister and the entire Government in the spring of 2014, and the appointment of a new Minister of Justice, the reform efforts were stepped up particularly in the legal system. This system remains orientated towards Western values, so that the IRZ was able to continue its cooperation with Armenia.

Cooperation between the IRZ and Armenia has been continually expanded since starting in 2011. After the abovementioned change of leadership at the Ministry of Justice, it was continued with the new contacts, who from the outset expressed considerable interest in receiving support from the IRZ. This may also be the result of the success of the EU twinning project on legal approximation and support for the Translation Centre, which the IRZ carried out at the Ministry of Justice from September 2012 to August 2014. The reform of the Armenian Penitentiary Code was identified as the first joint project, on which a first meeting of the Armenian working group and an IRZ expert already took place in Yerevan at the end of 2014. In 2014, the IRZ intensified the existing cooperation both with the criminal chamber and with the Judicial Department of the Court of Cassation and continued the training of young lawyers. To this end, as in 2013, the IRZ
once more offered a one-week summer school in Armenia for law students on the European Convention on Human Rights in cooperation with the Armenian Young Lawyers Association (AYLA). There was also intensive cooperation with the Yerevan State University. Within the Master’s degree course on criminology, the IRZ supported a lecture on penitentiary law, as well as two one-year German courses for students at the law school. The IRZ established initial contacts with the Armenian Bar in order to define possible topical areas for future cooperation, possibly with the involvement of the Federal Bar.

Because of the reform of Penitentiary Code, one focus of the IRZ’s work in Armenia in 2015 will be on criminal law. The Draft Bill for a reformed Code of Criminal Procedure has been submitted to the Armenian Parliament. This reform and that of the Criminal Code, which is currently also being revised, leads to a considerable need for amendments to the Penitentiary Law. A working group composed of Armenian experts, primarily scholars, as well as a German penitentiary expert, will be drawing up the draft of a reformed Penitentiary Code from the beginning of 2015 so that it can be introduced into the legislative process to coincide as closely as possible with the time of introducing the Criminal Code. The Ministry has also enquired as to receiving support from the IRZ in the codification of the probation service, so that this will certainly involve more than one project. In the field of the further training of lawyers, the IRZ will intensify its cooperation with AYLA, as well as with the Bar. Finally, the IRZ will continue its cooperation with the criminal chamber of the Court of Cassation, as well as with the Judicial Department.