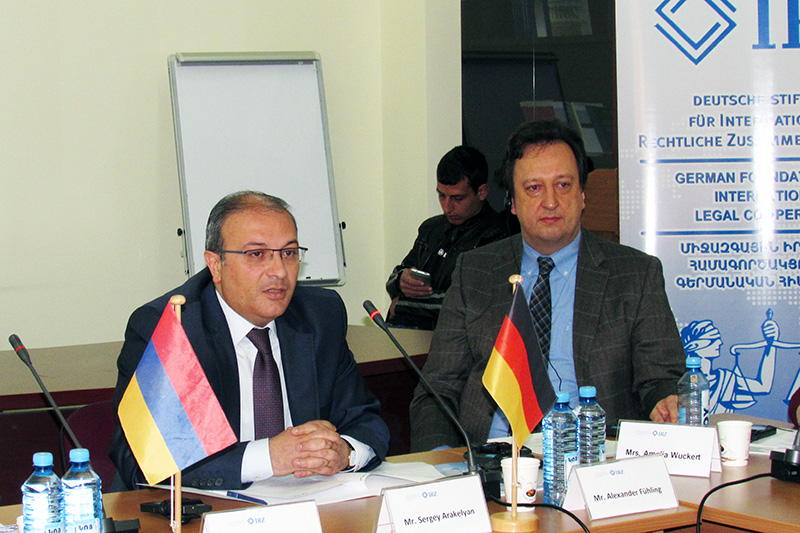 Sergey Arakelyan (on the left), Director of the Armenian Judicial Academy; Alexander Fühling,  a judge at the local court of Bonn

On 2 and 3 May 2017, a seminar on sentencing was held in partnership with the Judicial Academy of the Republic of Armenia in Yerevan. German experts contributing to the event for the IRZ were Alexander Fühling, a judge at the local court of Bonn, and Senior Public Prosecutor Wolf-Tilman Baumert, who is head of the department of economic crime and press officer at the Public Prosecutor’s Office in Wuppertal.

The “Sentencing” seminar covered the following sub-topics, amongst others:

Release on licence and prosecution of offences carried out abroad and suspended sentences and provisions for special cases (particularities of provisions for economic, corruption and tax cases and for cases of drug-related and violent crimes) were also discussed.

The two German experts were able to report respectively from the perspective of the judge and the public prosecutor, thanks to their professional activities. This also corresponded with the composition of the seminar attendees, who were trainee judges and public prosecutors. A training course at the Judicial Academy is compulsory in Armenia for both of these professions. The selection of candidates followed by an examination takes place prior to this vocational training.

The Judicial Academy of the Republic of Armenia was represented at the event by its Director, Sergey Arakelyan, amongst others. The participants showed a great deal of interest and were extremely motivated. They asked a lot of questions, joined in with lively discussions and also made suggestions for other events. As this seminar is the first event of its kind to be held with the Armenian Judicial Academy, it would be appropriate to take up the participants’ suggestions and take them into account for future events.

The IRZ concluded its work in Armenia for 2016 with two important projects for students. As in previous years, a guest lecture was held for students on the criminology masters programme, which focussed this year on probation services. On 6 and 7 December, the speaker Wolfgang Eichstädter provided an insight into the practical work of probation officers in Germany.

The lecture focussed on discussions with subjects, as well as issues concerning the organisation of the working day. He cited a few examples of cases from his long-standing career as a probation officer in Berlin and held discussions with the participants on dealing with subjects in these situations.

A new law on the probation service entered into force in Armenia a few months ago, introducing fundamental changes to regulations governing the role and tasks of probation officers. These practical insights were therefore of great interest, and not only for the students. A few active probation officers also attended the lecture and took an active part in the open discussions.

The moot court in criminal law, which was held from 8 to 10 December in the Aghveran mountain resort, was of a more competitive nature. Six groups of students from five different universities in Armenia had qualified for the final round in a written competition. They took it in turns to take on the role of Public Prosecutor and the Defence and had to make a convincing case for their arguments in front of a jury of six highly experienced Armenian and German judges and lawyers. From the German side, Erich Joester, a criminal defence lawyer and notary from Bremen, and Jan F. Orth, Presiding Judge at the Regional Court of Cologne, put the rhetorical and strategic abilities of the students to the test with some tricky questions. The team of five from Yerevan State University won the competition but this intense event will be remembered by all the participants as a special highlight of their training. If possible, the IRZ plans to hold the competition again next year.

One of the objectives of the conference was to discuss digitalisation and people-friendly processes, which are currently part of the reform of notary processes in both Germany and Armenia. It was also the occasion to talk about some of the new developments in notarial matters in Armenia, the subject of reforms to Armenian notarial law, which has existed for several years already and is now undergoing revision by the Ministry of Justice.

With regards to digitalisation, Richard Bock gave an outline of the electronic systems already used in German notary processes in the field of the land and commercial registers, as well as the upcoming digital archiving of notarial documents across Germany, which was initiated by the German Federal Chamber of Notaries. Vardan Hovhannisyan, an IT expert at the Armenian Chamber of Notaries explained the “One Window” system, an electronic system simplifying notaries’ applications with various authorities, which has recently been introduced in Armenia. Other lectures covered subjects including the enforcement of notarial deeds, notarial liability and the responsibilities of notaries in certification processes. The short lectures by German speakers and their Armenian colleagues were followed by lively and often very controversial discussions. This showed how interested the participants were in the subjects that were discussed and enabled an intense exchange of opinion between the experienced practitioners and the Ministry of Justice.