Discussions during the two-day meeting focussed on the well-advanced draft legislation on the probation service, as well as the draft legislation concerning the execution of prison sentences. Both laws have until now been the focus of work by various structures and authorities and are now thought to be ready for incorporation in legislation. The discussions took place at a highly professional level and it soon became clear that all the participants want to agree on a single solution.

The IRZ has been supporting the Armenian Ministry of Justice in its reform of the legislation concerning the execution of prison sentences since the end of 2014. As well as various meetings between the working group and Dr. von der Beck, a working visit to Oldenburg also took place at the end of 2015. This presented an opportunity, amongst other things, for participants to gain a direct insight into German penal institutions. There are plans for further meetings to look in detail at the texts for the definitive proposed legislation and these will take place over the next few months between the working group and the German expert.

Supporting young legal professionals is a major concern of the IRZ. This is why it organized a summer school on the European Convention on Human Rights (ECHR) which has been the third summer school in this year. This year's event in Aghrevan was financed by the Federal Foreign Office and organised by the IRZ in cooperation with the Armenian Young Lawyers Association (AYLA). Starting on 28 September 2015, 29 students of various universities in Yerevan met in the Armenian mountains to listen to the presentations of German lecturers for five days.

The German ambassador to Armenia, Matthias Kiesler, welcomed the participants and pointed out the great importance of the summer school. The former Presiding Judge at the Federal Administrative Court, Dr Otto Mallmann, gave a lecture focussing on Articles 2, 3, 8 and 11 ECHR on the first two days. The exceptional interest of the whole audience was striking on the very first day. They asked many challenging questions and openly discussed controversial issues.

The lectures given by the lawyer Dr Thomas Nappert and Professor Michaela Wittinger in the further course of the summer school dealt with Articles 5, 6 and 10 ECHR, amongst others. Small working groups were repeatedly formed which individually considered, presented and thereupon discussed ECHR cases and judgements.

The three German experts individually responded to the interests of the young women and men. When it was for instance signalled that the issue of freedom of religion did not have the same relevance in Armenia as in many other countries, they focussed on the law of freedom of assembly and association.

Thanks to the strong commitment of all people involved, the atmosphere at the summer school was extremely concentrated and pleasant this year again. This encouraged the IRZ to organise similar events also in the future. 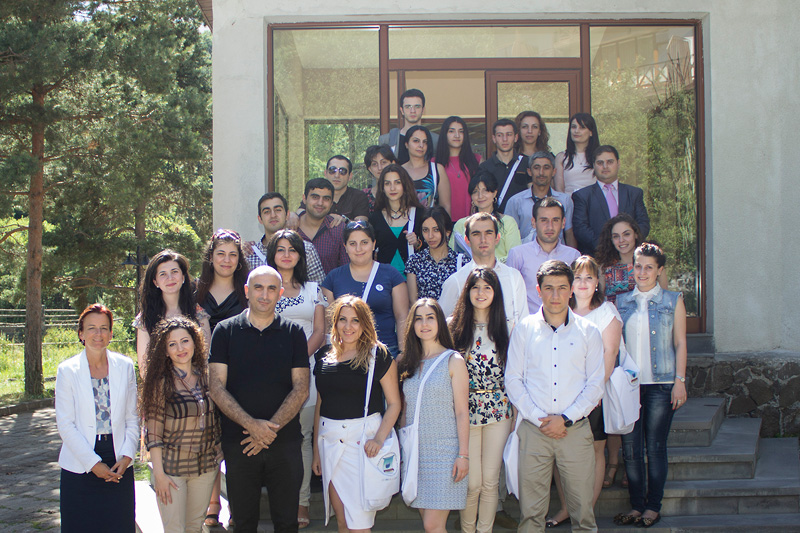 Participants of the summer school in Arzakan

IRZ has held its second summer school on European Union law (EU law) and the European Convention on Human Rights (ECHR) in Arzakan, Armenia from 14 to 18 July 2014 in cooperation with the Armenian Young Lawyers Association (AYLA).

The participants included young lawyers and law students. AYLA and IRZ conducted a selection process in advance of the event to find the most suitable candidates. Just like last year, there was a very large number of applicants flocking to apply. A total of 30 people attended the summer camp.

As opposed to last year, this year's focus was on the ECHR and filing complaints with the European Court of Human Rights (ECtHR). There was also an introduction to EU law on both of the first days. In addition to presenting the institutional structure of the European Union (EU) and an overview of the evolution of EU law, there was also a lecture on Armenia's cooperation with the EU held by an AYLA employee at the start of the event. Professor Dr. Carmen Thiele from Viadrina European University Frankfurt (Oder) also presented on the Charter of Fundamental Rights of the European Unions and pointed out the differences between it and the ECHR. The participants then worked on these topics in working groups. The next three days were dedicated to the ECHR, focusing on Article 5 (Liberty and Security), 6 (Fair Trial) and 10 (Freedom of Expression) and the procedure for filing a complaint with the ECtHR. Dr. Michael-Kleine Cosack, a lawyer from Freiburg, and Professor Dr. Michaela Wittinger from the Mannheim University of Applied Sciences started off by presenting on the articles. In the afternoon, the participants looked in working groups into real-life ECtHR cases selected by the speakers and concerning the individual articles and then presented on them.

The participants had lively discussions about the cases and the various points of views and assessments during the individual working groups and the presentation of the results. The experts were always available for questions and were very impressed with the motivation of the participants and the open discussion atmosphere.