The forthcoming reform of the law governing the prison system in Armenia involves several changes, which will directly affect staff working in penal institutions. The IRZ has advised the Ministry of Justice in the drafting of the new law, which is due to come into force during the first six months of next year.

The prison system is therefore in great need of advice when it comes to practical arrangements, treatment programmes, management structures, etc. In order to fulfil this requirement, the decision was made to organise workshops in four institutions to develop customised concepts for the subjects of “individual sentence planning”, “management structures” and “work in prisons”. Expert talks and consultations in individual penal institutions should lead to the identification of any weak areas and the development of shared strategies, which could be defined in agreement with the relevant authorities.

From 14 to 16 September 2018, three consecutive events were held in partnership with the Ministry of Justice and the Prison Service of the Republic of Armenia to discuss practical issues in prisons.

As German experts, the organisers were fortunately able to attract senior government official Thomas Müller, prison director at the Karlsruhe penal institution, and Heinz Brüche, who is responsible for education at the Bildungszentrum Justizvollzug Baden-Württemberg (a training centre for prison staff in Germany).

First of all, expert discussions were held with the Ministry of Justice for the Republic of Armenia in Yerevan. The following were the main topics of discussion:

Representatives from the following institutions took part in the expert discussions:

Afterwards, workshops took place for staff at the prisons in Armavir and Abovyan to cover the following topics:

The participants in all three events were very interested and motivated. They asked a lot of questions and took a very active part in group work.

Two other workshops following the same format are due to take place this year at the penal institutions in Sevan and Vartashen.

By the end of this year, participants in the workshops should have developed concepts, taking any local requirements into account, for individual enforcement plans, management structures and work in prisons. These will be discussed and processed in partnership with the two German experts next year at other, more in-depth workshops.

The recently updated notarial law of the Republic of Armenia stipulates that Armenia’s notary practices must be digitalised. This means that the subject of digitalisation is highly contentious for this professional group and was the main focus of the event. Richard Bock explained in detail the process of digitalisation in Germany, including electronic authentication, electronic contracts, electronic signatures and other electronic aids.

The following topics were also discussed:

The participants in this event were extremely interested and motivated.

With regard to the recently changed version of the current notarial law, it became clear that the chamber of notaries was barely involved or not involved at all in the legislation. This fact has a significant impact on the application of the law. It is therefore becoming increasingly important to strengthen the chamber of notaries, particularly as far as its communications with the Ministry of Justice are concerned, so that this profession can continue to exist in Armenia. 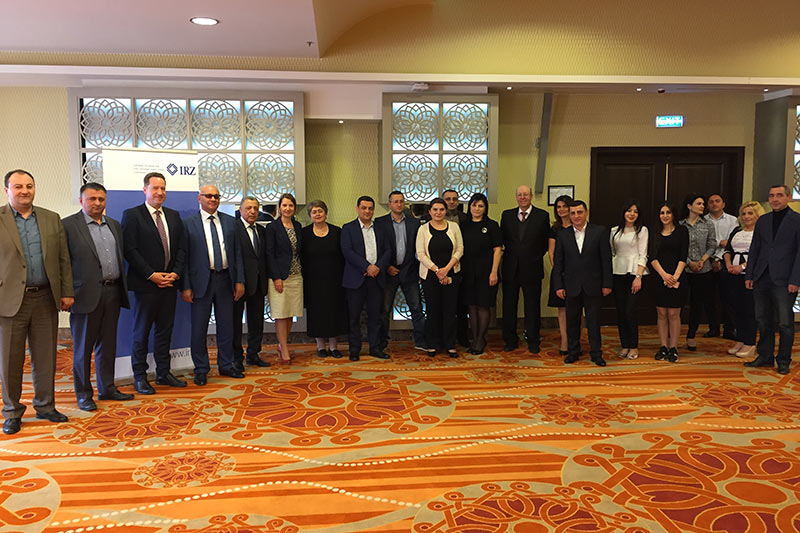 Participants in the criminal law colloquium in Tsaghkadzor, Armenia

A colloquium on enforcement measures in criminal proceedings, which had long been planned by the IRZ together with the criminal division of the Court of Cassation of the Republic of Armenia, finally took place under unexpected conditions on 26 and 27 April 2018. The colloquium was held at the same time as major demonstrations were taking place in Yerivan and other parts of Armenia, during which sections of the population expressed their frustration with the Armenian government and their desire for political change.

The events, which were also reported in the German media, were therefore not just a topic of conversation at the professional event. They also required a certain flexibility in terms of logistics. This is because, although the event was held in the peaceful surroundings of the mountain resort of Tsaghkadzor, road blocks meant that the participants, who had come from various parts of the country, were not able to reach the venue on time. And so the colloquium started a little later than planned, although all the scheduled subject matter was still covered.

From the German side, a former judge at the German Federal Court of Justice, Holger Rothfuß, presented the German rules governing pre-trial custody, banning people from exercising their professions and bail payments. Prof. Dr. Jan Bergmann, Presiding Judge at the Administrative Court of Baden-Württemberg and Honorary Professor at the Institute of Economics and Law at Stuttgart University, expanded on the German perspective concerning the representation of provisions of European law and introduced in particular the jurisdiction of the European Court of Human Rights.

A lot of time was taken up with questions from the participating criminal court judges, who came to the event from courts of first instance, the court of appeal and the court of cassation. There were lively discussions about the lectures and about the planned changes to the laws on pre-trial custody in Armenia, the possibilities for appeal and about more practical concerns, such as the management of on-call rosters at court. The discussions were enriching for all parties concerned.

The ongoing political developments in Armenia are being closely monitored by the IRZ and are likely to continue to have an effect in the near future on the activities of the IRZ in this country.