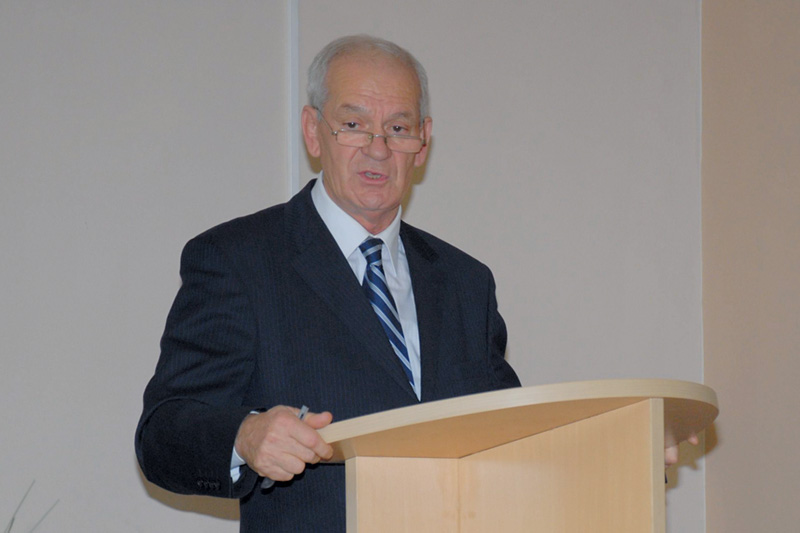 Dean Prof. Dr. Milan Tomic giving his opening address on the “5th Day of German Law in Bosnia and Herzegovina”

Bosnia and Herzegovina has been a focus of the IRZ's activities in South Eastern Europe since it started operations there in 2000 within the framework of the Stability Pact. Because the country began the transformation of its legal system lated as a result of the war, the rapid implementation of rule-of-law standards is particularly urgent. Consultation provided by Germany makes sense and is particularly sustainable because the law in Bosnia and Herzegovina is traditionally orientated towards the continental European model.

Difficulties arise in the project work in Bosnia and Herzegovina because of the distinctly federal system, the entities of which only work together to a limited extent. The ensuing fragmentation of the law causes problems for the Stabilisation and Association Agreement with the EU, which was signed in 2008, but has yet to be ratified. The cause of this is the still outstanding implementation of the judgment of the European Court of Human Rights in the Case of Sejdic/Finci against Bosnia and Herzegovina of 22 December 2009, which calls for the elimination of discrimination in the right to be elected to office.

On the other hand, the younger generation is an important resource for Bosnia and Herzegovina. Many young academics, a considerable number of whom have lived in Germany as war refugees, speak German at native speaker level and feel predisposed towards Western European legal standards because of their experience abroad. It is towards this group in particular that the IRZ targets its work in order to prevent any further brain drain. It is these young academics in particular who can create the necessary impetus in the medium term to overcome the current situation.

The focus of the IRZ's project work in Bosnia and Herzegovina has been on the field of the rule of law and justice for years. The IRZ supports basic and further training in the field of civil and commercial law at the Law Faculties and at both education centres for judges and public prosecutors. Activities in the field of the study and reception of German law have moreover gradually been added in recent years, each at the initiative of project partners in the country. The IRZ supports the work of the German-Bosnian-Herzegovinian Lawyers' Association (DBHJV) and organises the "Day of German Law in Bosnia and Herzegovina", which has been taking place on an annual basis since 2009. The IRZ also accompanies the "Additional studies on German law" at the Law Faculty in Sarajevo, in support of which the "IRZ library of German law at the Law Faculty in Sarajevo" was established in 2012. Finally, the IRZ has released a number of legal publications in recent years in the local language which also target lawyers in other countries of the region. Not lastly, the topic of human rights in the post-conflict area of Bosnia and Herzegovina remains on the IRZ's agenda. This topic was intensified in 2013 by including the country in a project on this subject which was promoted by the Federal Foreign Office.

The IRZ will continue to place the focus on the basic and further training of lawyers, in particular in civil and civil procedure law. The focus is on imparting and improving general legal skills as well as specific expert knowledge in areas of particular practical relevance. The IRZ also involves participants from the neighbouring countries on a case-by-case basis. The IRZ is maintaining the traditional links between Bosnia and Herzegovina and Germany through the ongoing cooperation with the above mentioned partners. In this context, amongst other things publications related to German law are produced, "Days of German Law in Bosnia and Herzegovina" organised and the complementary studies on German law at the Sarajevo Law Faculty are jointly organised.

Constitutional law/human rights and their enforcement

The IRZ will be continuing its project work in Bosnia and Herzegovina in close collaboration with its partners. It will continue to co-edit various legal specialist publications which are also published on the Internet and address readers and Internet users in the entire region. Furthermore, the IRZ will be further extending the accompanying studies on German law at Sarajevo Law Faculty and the IRZ library there, as well as continuing the programme of courses on German legal terminology. The focus here will continue to be on orientation towards German law as the benchmark law corresponding to the country's own legal tradition, as well as human rights and the support of young lawyers and regional cooperation.