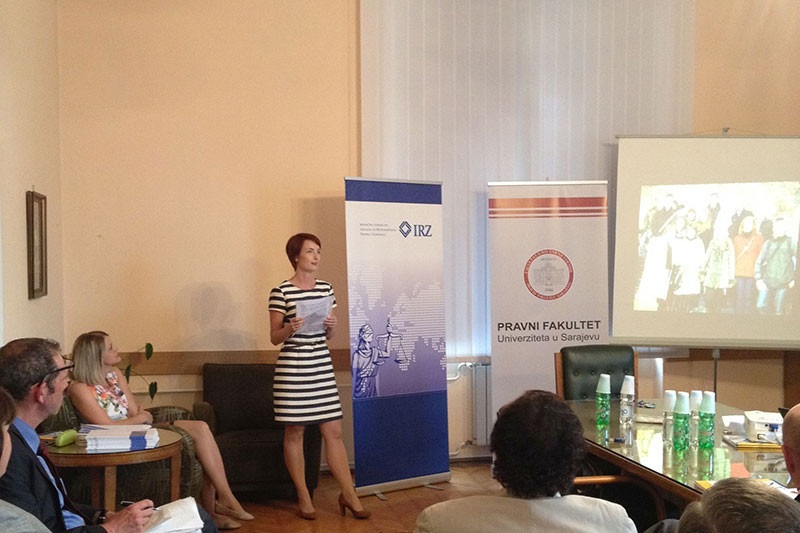 The IRZ has regarded Bosnia and Herzegovina as one of its priorities since 2000 due to the country's specific situation. Because the country did not begin the transformation of its legal system until late as a result of the war, the rapid implementation of the standards of the constitutional state ("Rechtsstaat") is particularly urgent there. At the same time, consultation provided by Germany makes sense and is particularly sustainable because the law in Bosnia-Herzegovina is traditionally orientated towards the continental European model.

Difficulties arise in the project work in Bosnia and Herzegovina because of the distinctly federal system, the entities of which only work together to a limited extent, which also causes a fragmentation of the law. Despite these and other inhibiting factors, when the Stabilisation and Association Agreement with the EU came into force on 1 June 2015, this constituted a further major step towards approximation to the EU. Furthermore, in order to overcome the standstill that has been reached in reform efforts, the German-UK initiative to rekindle the reform process and realign the process of approximation to the European Union was launched in 2014, in which the rule of law assumes a prominent role.

Because of the "reform bottleneck", the IRZ is currently focussing its efforts on the basic and further training of lawyers in Bosnia and Herzegovina. In addition to cooperation with practicing legal professionals, in particular with judges from the ordinary courts and the constitutional courts, the focus is on supporting young lawyers. This is to prevent any further brain drain. Furthermore, particular importance attaches to young lawyers as they can create an important impetus for the reform process in the future. Furthermore, many of them have lived in Germany as war refugees, speak German at native speaker level and feel predisposed towards Western European legal standards as a result of their experience abroad.

The focus of the IRZ in Bosnia and Herzegovina over the years has been on the rule of law and justice. It supports basic and further training in the field of civil and commercial law at the Faculties of Law and at both education centres for judges and public prosecutors. Activities in the study and reception of German law have moreover been added in recent years, each at the initiative of project partners in the country. Finally, the IRZ has released a number of legal publications in the local language in recent years which also target lawyers in other countries of the region. The topic of human rights ultimately remains on the agenda of the IRZ in the post-conflict area of Bosnia and Herzegovina. The partners in the country particularly include the further training centres for judges and public prosecutors of both entities, the German-Bosnian-Herzegovinian Lawyers' Association (DBHJV), the Faculties of Law of the Universities of Mostar, Sarajevo and Zenica, as well as the "Vaša Prava" pro bono legal aid organisation. The IRZ also cooperates on suitable projects with other German institutions and organisations such as the GIZ and the Goethe Institute.

The IRZ will be continuing and intensifying its project work in Bosnia and Herzegovina in 2016 in close coordination with its partners. The focus here will continue to be on human rights and support for young lawyers as well as regional cooperation.