The three-day event was characterised by an intense exchange of ideas and lively discussions, which were inspired by keynote speeches and reports on the practical experiences of representatives from the participating constitutional courts, as well as by a former judge at the German Federal Constitutional Court, Professor Dr. Udo Steiner, and the former President of the Constitutional Court of the State of Saxony-Anhalt, Winfried Schubert.

The particular importance of constitutional courts carrying out active and transparent media work was also pointed out. This helps courts to gain respect amongst the general public, which then results in greater independence. However, it was also noted that a constitutional court can only be convincing if judgements are well-justified, whereby the pressure to provide justification is the downside of judicial independence.

As has become standard practice for this series of regional conferences, which was started by the Constitutional Court of Bosnia and Herzegovina in 2003, the speeches are also published in the court’s publications so that they can be made available to the professional public. The following constitutional courts in the region also reported on the conference on their websites:

From 8 to 10 September, the third regional “Introduction to German law in the local language” block seminar was held at the Faculty of Law in the industrial Bosnian city of Zenica for students from Kragujevac (Serbia), Skopje (Macedonia) and Zenica (Bosnia and Herzegovina).

The speakers at the event were Prof. Dr. Zlatan Meškić, Zenica, Prof Dr. Slavko Djordjević, Kragujevac, Doz. Dr. Aleksandar Spasov, Skopje, and Dr. Stefan Pürner from the IRZ. The Dean of the Faculty, Dr. Enes Bikić, gave the welcoming speech. The IRZ has been working closely with all three of the participating Southeast European faculties and lecturers for many years.

The topics of the seminar were:

When discussing the last topic, the participants and speakers also talked about the fact that there has been a significant failure to address the authoritarian systems in the former regions of Yugoslavia and about the conflicts resulting from the collapse of Yugoslavia. What is particularly encouraging is that, despite the multi-ethnic composition of the seminar, these discussions took place objectively and with mutual respect, which is sadly not always the case in this region.

The event therefore not only made a contribution towards reinforcing the role played by German law in guiding legal transformation, but also contributed towards the normalisation of expert discussions. The seminar represented a great opportunity for the young legal talent in the region to make and maintain contacts.

New edition of the NPR journal focuses on “Public Law” 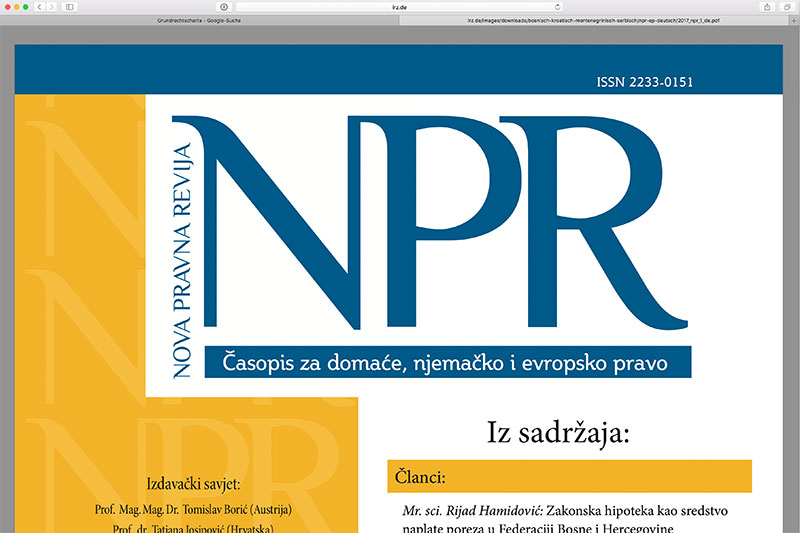 The 1/2017 edition of the journal “Nova pravna revija – časopis za domaće, njemačko i evropsko pravo“ (New Legal Review - a journal of  regional, German and European law; NPR for short) is hot off the press in a full text version and a short edition in German. For eight years now, the IRZ has been publishing this journal  alongside the German-Bosnian-Herzegovinian Lawyers' Association (DBHJV) and the Society for the Study and Reception of German Law based in Serbia.

The current edition deals with the main topic, “Public Law”. The main focus is on the first part of an extensive comparative analysis of parliamentary legislative procedures in Bosnia and Herzegovina, Montenegro and Serbia.

Other essays on other legal fields deal with property and mortgage law in Bosnia and Herzegovina and legal issues concerning same-sex partnerships in Serbia. Current judgements by the Federal Court of Justice and important aspects of European legal developments are also included. With regard to European law, the spectrum of topics covered in the current edition ranges from asylum and data protection laws, the Charter of Fundamental Rights, competition law, the CETA agreement and the fight against terrorism.

In this edition, the “Regulations and Materials” column, in which interesting legal text is translated and commented upon, is devoted to the German anti-doping legislation. The edition is rounded off with a comprehensive section including various book reviews and event reports.

The original issues of the NPR are available as downloads from the IRZ website and from various project partners, such as the Supreme Judicial Council of Bosnia and Herzegovina and the south-east European lawyers’ network, Harmonius. The download section of this website also features the German short editions of the journal, so that those who are interested and don't have the relevant language skills can get a picture of the development of the journal.

The NPR is produced by a Bosnian-Herzegovinian-German-Serbian editorial team. The journal’s Board of Editors includes well-respected law experts from various countries. The German members are Professor Dr. Dres. h.c. Friedrich-Christian Schroeder, Regensburg, and Prof. Dr. Heinz-Peter Mansel, Cologne, who is also the co-publisher and editor of the German journal "IPRax - the practice of international private and procedural law".

As well as original articles by south-eastern European authors, the NPR also publishes the work of foreign authors in translation, which have already appeared in other languages in well-respected German professional journals such as

In this way, readers in south-eastern Europe are able to gain an insight into the wide variety of legal publications in Germany, even if they don’t have the necessary language skills.