On 30 June 2018, another workshop on legal methodology was held for postgraduate students at the Faculty of Law in Zenica, Bosnia. The IRZ was one of the organisers of this event.

The opening of the event by Prof. Dr. Spahija Kozlić, Chairman of the Council for Research and Teaching at the host faculty at the University of Zenica, was followed by some lectures on various issues concerning the scientific aspect of the law.

The lectures covered a broad spectrum. Prof. Dr. Wolfgang Rohrbach from Vienna looked in more detail at the scientific approach, particularly for legislation projects in insurance, during his lecture. Another introductory lecture dealt with specific questions concerning the composition of research work.

The main part of the event was dedicated to eight lectures, which postgraduate students had prepared in writing as part of their postgraduate research, and the critical appraisal of these works. These had already been reviewed in short written reports by the attending critics, Prof. Dr. Zlatan Meskić, Zenica, Prof. Dr. Slavko Đorđević, Kragujevac, Prof. Dr. Wolfgang Rohrbach, Vienna, and Dr. Stefan Pürner, IRZ.

The oral presentations by the postgraduate students were followed by a further assessment by the participants in the workshop and by extensive discussions. This meant that the speakers could also benefit from their colleagues’ comments on their work and lectures.

The main focus here was on issues concerning the systematic organisation of papers, the oral presentation, the revision of scientific manuscripts and “quotable” literature. With regard to the latter, it also became clear that the doctoral candidates
in the region did not have sufficient access to current literature on subjects of foreign, European and international law.

The event benefited from the fact that all those involved spoke the local language, including the IRZ speakers from Germany and Austria. This meant that the papers and lectures could be reviewed without having to be translated first and could also be discussed immediately.

The involvement of Professor Dr. Slavko Djordjevic from Serbia and of postgraduate students from Croatia also gave the event a regional aspect. 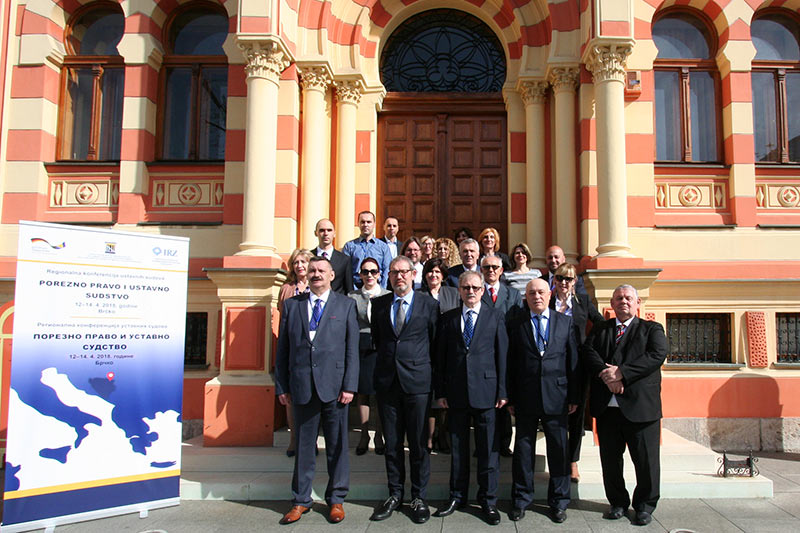 Participants in the regional conference in Brčko

From 12 to 14 April 2018, a conference on “Tax law in constitutional court jurisdiction” was held in Brčko in Eastern Bosnia. This “district” has a special status in the constitutional structure of the state of Bosnia and Herzegovina. The conference was financed by funds from the German Federal Foreign Office allocated to Germany’s contribution to the Stability Pact for South-East Europe and was organised by the Constitutional Court of Bosnia and Herzegovina and the IRZ.

Judges and legal staff from the constitutional courts of Bosnia and Herzegovina, Croatia, Macedonia, Montenegro and Serbia attended the conference to learn about the respective case law practised in neighbouring states, at the European Court of Human Rights (ECtHR) and at the German Federal Constitutional Court (BVerfG).

The event was opened by the President of the Constitutional Court of Bosnia and Herzegovina, Mirsad Ćeman, and the Deputy Mayor of the District of Brčko, Dr. Anto Domić. Dr. Stefan Pürner welcomed the participants on behalf of the IRZ and the German Ambassador, Christiane Hohmann, who was unable to attend.

Speakers representing the various regions were:

The lecture on Germany was given by Professor Marc Desens from the department of Public Law, in particular Tax Law and Public Commercial Law, at the law faculty in Leipzig. Professor Desens also used to work as a researcher for the second senate of the BVerfG, which is responsible for tax law.

The event revealed the differences and similarities between Germany and the represented West Balkan states, as well as between the different countries in the region. The similarities include the fact that all constitutional courts make it clear that they avoid “constitutional actionism” and therefore decide only on violations to the constitution and not on the infringement of subconstitutional law. They also respect the considerable leeway of the legislator to define their own tax laws.

Opinions divided, however, when it came to the question of which aspects of tax law, which are fundamentally protected by the constitution, should be weighed up against state financing interests. In some of the participating states, the focus here is on intervention in property, whilst in Germany, the principle of equality is mostly used as a standard of review for state intervention through taxes.

There were also differences in the way in which constitutional courts are involved in tax law cases: Unlike in Germany, where 167 of the 170 decisions made by the BVerfG on tax law resulted in Normenkontrollverfahren (judicial review proceedings on the constitutionality of laws), in some states constitutional complaints prevail.

In many cases, South-East European constitutional courts established an infringement of fundamental civil rights concerning court proceedings. This ranged from omitting to clarify facts to cases lasting excessively long (in some cases 10 to 12 years) and to breaches of the right to a hearing through omitting to provide reasons for the decisions of the authorities and courts.

These and other deficiencies mentioned show that further activities are required in the field of tax law, which is very important, not least for the economy and for German investors in the partner states.

The organisers of the regional conference will take this situation into account by publishing the lectures (together with a report of the discussions) in a conference transcript. This will ensure that the events create a new medium, allowing a wider audience to benefit from the targeted results. 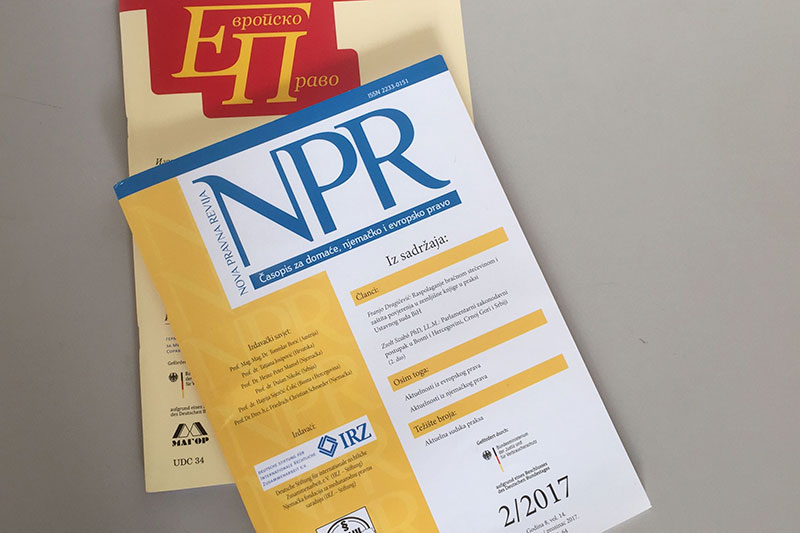 At the end of 2017, the latest editions of two journals for Southeast Europe, co-published by the IRZ, came out. The journal "Nova pravna revija - časopis za domaće, njemačko i evropsko pravo" (New Legal Review - a journal of regional, German and European law; NPR for short) is distributed in all succession states of former Yugoslavia. Also, a new edition of the Macedonian journal for European Law, "Evropsko Pravo" (EP), was published.

The two journals cover a wide range of topics. The latest NPR edition deals with questions ranging from family and land register law and the CISG case law in Bosnia and Herzegovina, to information about recent developments of European and German laws.

The intensive cooperation between the Institute for Eastern European Law and the IRZ on Southeast Europe is furthermore continued with a publication of the translation of a comparative law paper on the legislative procedure in Bosnia and Herzegovina, Montenegro and Serbia.

The paper was first published in the Jahrbuch für Ostrecht (Yearbook for Eastern European Law).

The new edition of the Macedonian journal on European law "EP" contains no less than seven papers by Macedonian authors covering the following issues, amongst others:

Two comparative papers compare on the one hand the Macedonian value added tax with the European model of the net all-phase VAT system with pre-tax deduction, and on the other hand the legal provisions on the management and supervisory boards of public companies.

The edition furthermore contains a detailed report about the symposium on the "Legal transformation in Southeast Europe using former Yugoslavia as an example: prerequisites, parties involved, failures and successes - a preliminary review", which the IRZ organised at the end of 2017 in cooperation with the Southeast Europe Association (SOG).

The two journals are also spread via their own websites: