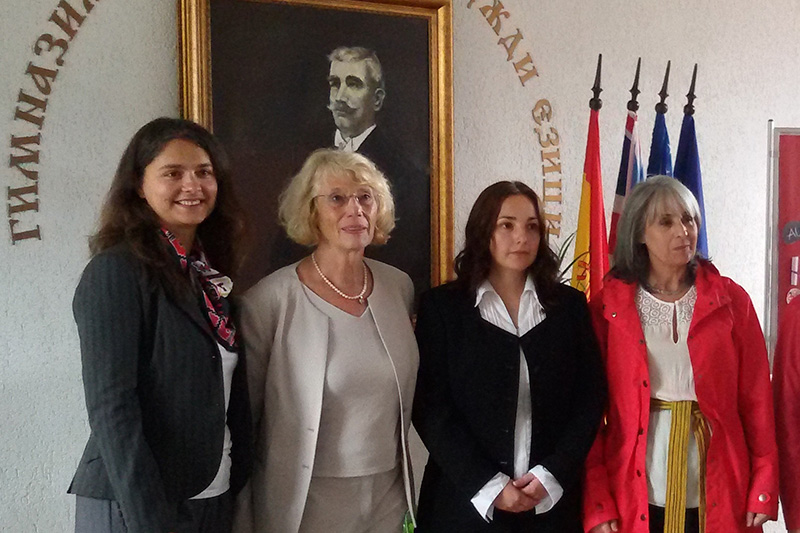 Opening in Smolyan: Margarita Popova, Vice-President of the Republic of Bulgaria; Nadezhda Goranova, headmistress of the high school; speaker Ulrike Schultz; Kremena Ehrmann, IRZ advisor for the cooperation with Bulgaria (from right to left)

On 10 October 2016 in the Bulgarian city of Smolyan, the Vice-President of the Republic of Bulgaria, Margarita Popova, opened the ninth event in the “Democracy and Law” series, which is organised by the IRZ in partnership with the President’s office. Margarita Popova spoke to the participating students, teachers and guests about democracy as a way of life and stressed the importance of building bridges between countries and individuals. She was full of praise for the long-term commitment of the IRZ to this project and for its many years of work with institutions in Bulgaria.

The IRZ has been offering this course for senior years at German-language high schools since 2013. With some 70 students taking part in the event, the school in Smolyan is the ninth school to benefit, after high schools in Lovech, Blagoevgrad, Sofia, Pazardzhik, Razgrad, Kardzhali, Burgas and Haskovo. Participants were taught about the basic principles of democracy, state organisation and law. The objectives of the four-day course are to raise awareness of the rule of law and democracy amongst young people, thereby supporting a highly motivated civil society of the future.

The programme is based on legal studies at the Ministry of Justice for the North Rhine-Westfalia region and has been especially adapted to suit the circumstances in Bulgaria. The speaker, Ulrike Schultz, was until recently a senior professor at the department for German and European Constitutional and Administrative Law and International Law at the Open University of Hagen and plays a major role in the development of legal studies in the North Rhine-Westfalia region.

Schools all over Bulgaria have been registering their interest in the course with the President’s office. Two to three more schools will be selected to benefit from the project as it continues next year.