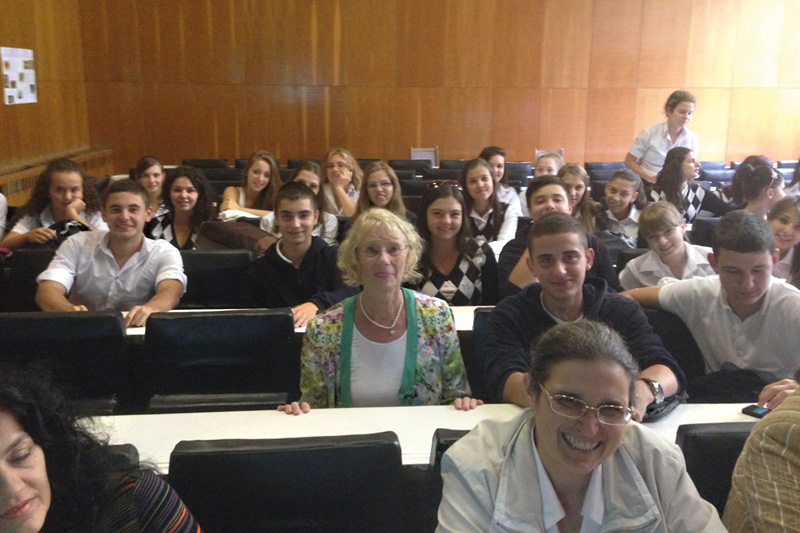 Lessons “Democracy and the law” at the foreign-language grammar school in Blagoevgrad: Teacher Ulrike Schultz in her class

The IRZ has been working with institutions in Bulgaria for more than twenty years, and always directs its efforts towards the points of topical interest. The first consultations of the Ministry of Justice took place aiming to support the development of structures orientated towards the rule of law and the market economy and to promote the establishment of an independent, well-functioning judicial apparatus. The harmonisation of the national legal system with European law which this necessitated became important in the years preceding Bulgaria's accession to the EU. Even after Bulgaria's accession, the situation in the sphere of justice gives good reason to continue the cooperation. The country continues to be subject to the mechanism for cooperation and verification of the Union. The most recent report by the European Commission on the progress that has been made once more revealed shortcomings in this area. Seven years after accession, there are still reservations regarding the independence and integrity of the judiciary. There are also difficulties amongst other things when it comes to the procedures and criteria on promotion and on filling important leadership positions, in spreading the workload as well as the allocation of cases. Both Bulgarian judges and observers outside the system are calling for an urgently-needed increase in performance. It has been stated several times that Bulgarian institutions are still struggling to make real progress in the fight against corruption and organised crime. It was said that there are still considerable shortcomings in this area despite the anti-corruption strategy and the establishment of a national anti-corruption and anti-organised crime authority. The lack of progress impacts the perception of the fight against organised crime in society. Furthermore, the political rows of the past year have done lasting damage to the little trust that citizens already had in the state institutions and the lawfulness of their dealings. The current situation in Bulgaria is typified by mistrust of the judiciary.

At the start of the IRZ's consultation activities in Bulgaria, the focus was equally on legislation consultation and on basic and further training on civil and commercial law topics, and these have remained a permanent element of cooperation. For instance, a seminar was held last year on the European order for payment procedure and on coercive execution for judges. The IRZ has stepped up consultation in the field of European law and the Europeanisation of national law in recent years, and has provided considerable support to the reform of the administrative courts by engaging in an intensive exchange on the organisation and modus operandi of an administrative court. There was demand in the year under report for further training events for the administrative court judges. A seminar on European law on asylum has proven very helpful in the context of the current refugee situation in Bulgaria. The IRZ also offered seminars on other topics from the fields of human rights and European law. Principles of constitutional law were discussed with judges of the Constitutional Court and the ordinary courts. Because of the shortcomings identified by the EU in the fields of criminal law and criminal procedure law, the IRZ has also stepped up cooperation in these areas in recent years. For instance, it offered consultation on the current draft of the new Criminal Code and made recommendations. The structure of the justice system and the organisation of the individual courts in Germany were taken up with considerable interest in Bulgaria as a model for success. The IRZ has been able to reach out to the majority of judges in senior positions with the seminars on this topic. Against the background of the current political situation in the country, the IRZ has supported the efforts of the judiciary to gain greater independence and improve its reputation in society in the framework of intensive cooperation with the Supreme Judicial Council of the Republic of Bulgaria.

The support of the IRZ is greatly appreciated by the Bulgarian partner institutions and the participants in the events. With regard to the sustainability of the reforms in Bulgaria, it is important to continue the discussions. This places ever greater emphasis on the exchange of experience between experts on both sides. Furthermore, the IRZ offers not only know-how in consultation as well as basic and further training programmes. The mutual recognition and the international contacts of the Bulgarian legal practitioners are an additional positive side-effect here. The IRZ is open to new enquiries when selecting the topics of consultation and of basic and further training. Both sides would like to see a broad thematic approach covering the various legal fields.

The IRZ wishes to continue cooperation with the previous partners. One focus here is support for justice sector reforms. The topics of "Court organisation and personnel management" will continue to be dealt with together with the central body of judicial self-administration, the Supreme Judicial Council. There were enquiries as to consultation on the assessment and promotion system in the German judiciary and the exchange of experience on territorial structural reforms in Germany. There is particular interest in expert knowledge of drawing up measures on increasing efficiency in the judiciary and in solving the problem of unequal workloads. In the consultation for the Supreme Judicial Council, additionally, a study visit to German courts and authorities is planned on the topic of "The information policy of the judiciary". The education of young people on their contributions to democratic civil society and on the rule of law is to be continued in the context of democracy and rule-of-law lessons in order to enhance the political self-confidence of the coming generation. The IRZ is working closely with the Vice-President of the Republic of Bulgaria in this regard. The IRZ will continue to be needed as a consultation partner in the ongoing reform of criminal law and the resulting necessary amendments to procedural law. Further training events from the field of criminal law and criminal procedure law are to be implemented with the Office of the Public Prosecutor General. The IRZ will also be continuing the seminars at the National Institute of Justice, focussing on European law and administrative law. The exchange with the Constitutional Court is to be continued through expert talks. There is a need to offer further consultation and further training events in this area because of the current problems in the law on refugees and the negative reports of the UN Refugee Agency on the legal status of refugees in Bulgaria.