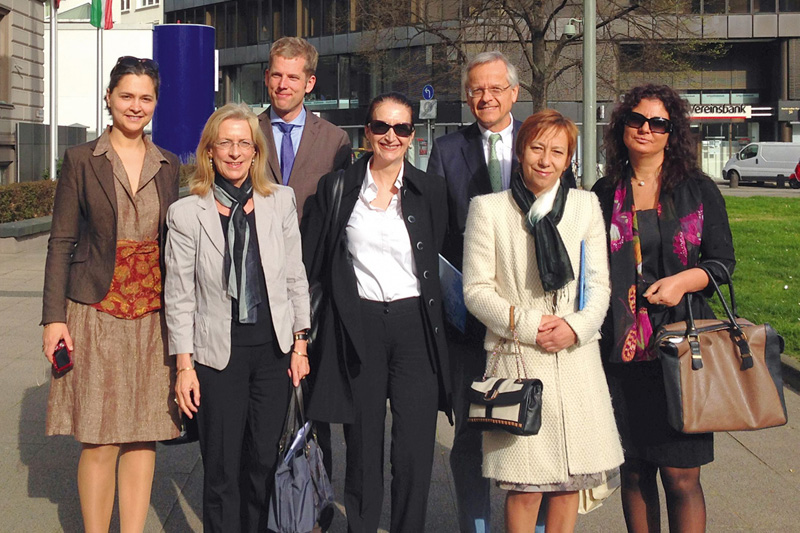 The IRZ has been working with institutions in Bulgaria for more than twenty years, and always directs its efforts towards the points of topical interest. The first consultations of the Ministry of Justice took place aiming to support the development of structures orientated towards the rule of law and the market economy and to promote the establishment of an independent, well-functioning judicial apparatus. The goal in the years preceding Bulgaria’s accession to the EU was to harmonise the national legal system with European Union law. But even eight years after accession, the situation in the justice sector justifies continuing the cooperation. There are still reservations regarding the independence and integrity of the judiciary. There are difficulties amongst other things when it comes to the procedures and criteria on promotion and on filling important leadership positions, in distributing the workload as well as in the allocation of cases. Both Bulgarian judges and observers outside the system are calling for an urgently-needed increase in performance. It has been stated several times that Bulgarian institutions are still struggling when it comes to the fight against corruption and org anised crime. It was said that there are still considerable shortcomings in this area despite the anti-corruption strategy and the establishment of a national anti-corruption and anti-organised crime authority. The lack of progress has a negative impact on the perception of the fight ag ainst organised crime in society. Furthermore, the political rows of the past years have done lasting damage to the little trust that citizens already had in the state institutions and the lawfulness of their dealings. The current situation in Bulgaria is typified by mistrust of the jud iciary. The IRZ is therefore promoting the efforts of the Supreme Judicial Council of the Republic of Bulgaria towards the independence of the judiciary in intensive cooperation with the latter.

At the start of the IRZ’s consultation activities in Bulgaria, the focus was equally on legislation consultation and on basic and further training on civil and commercial law topics, and these have remained a permanent element of cooperation. The IRZ has stepped up consultation in the field of European law and the Europeanisation of national law in recent years, and has provided considerable support to the reform of the administrative courts, for instance through further training events for the administrative court judges working there. Furthermore, a seminar on European law on asylum has proven very helpful in the context of the current refugee situation in Bulgaria. The IRZ also offered seminars on other topics from the fields of human rights and European law. Principles of constitutional law were discussed with judges of the Constitutional Court and of the ordinary courts. Because of the shortcomings identified by the EU in the fields of criminal law and criminal p rocedure law, the IRZ has also stepped up cooperation in these areas in recent years. For instance, it offered consultation on the current draft of the new Criminal Code and drew up recommendations. The structure of the justice system and the organisation of individual courts in Germany were taken up with considerable interest in Bulgaria as a model for success.

The IRZ has been able to reach out to the majority of judges in senior positions with the seminars on this topic.

The IRZ would like to continue the education of young people regarding their contributions to democratic civil society and the rule of law in the context of democracy and rule-of-law lessons in order to enhance the political self-confidence of the coming generation. The IRZ is working closely with the Vice President of the Republic of Bulgaria in this regard. There are plans to hold courses at the German-speaking grammar schools in Plovdiv and Varna. With regard to Bulgaria’s many years of membership of the EU, no further funds will be available to continue cooperation with the other partners.