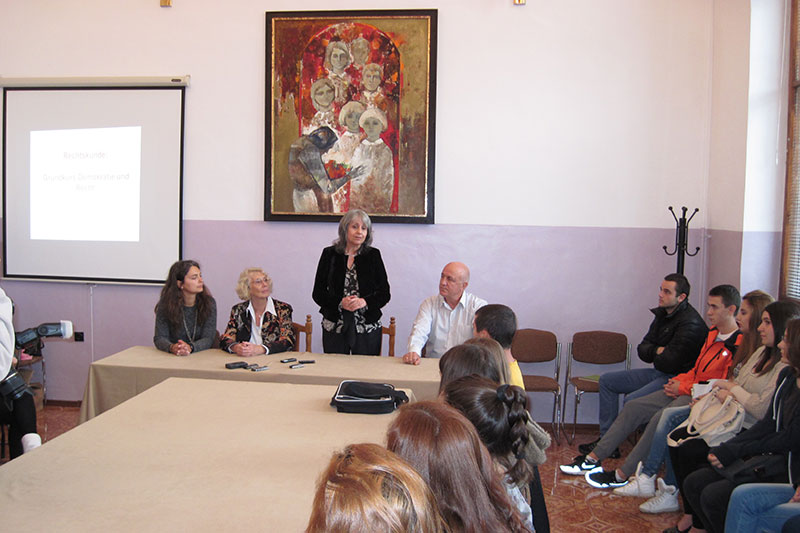 The Vice President of the Republic of Bulgaria, Margarita Popova, opening the course in democracy and the law in Razgrad. With her on the podium: Kremena Ehrmann (IRZ), speaker Ulrike Schultz and the principal of the "Ekzarch-Jossif" foreign-language grammar school, Peitscho Georgiev (left to right)

The IRZ has been cooperating with institutions in Bulgaria for more than twenty years, and always focuses on the respective current focal points. The first consultations of the Ministry of Justice took place at that time, aiming to support the development of structures orientated towards the rule of law and the market economy and to promote the establishment of an independent, well-functioning judiciary.

The focus in the years preceding Bulgaria's accession to the EU was on harmonising the national legal system with the law of the European Union. However, Bulgaria continues to face problems in the judicial field as a Member State. For instance, the European Commission's Progress Reports repeatedly recorded serious weaknesses when it comes to fighting corruption and organised crime, as well as in the occupation of important management positions in the judiciary. The lack of progress has a negative impact on the perception of the work of the judicial system in society. This has further diminished the already low level of confidence that citizens had in the state institutions and in the lawfulness of their actions. Public interest in helping to shape the State is relatively scant, especially among the younger generation.

At the start of the IRZ's consultation activities in Bulgaria, the focus was placed in equal measure on legislation consultation and on basic and further training on civil and commercial law topics, and these have subsequently remained a permanent element of cooperation. Over the years, the IRZ has stepped up consultation in the field of European law and the Europeanisation of national law and human rights, and has provided considerable support to the reform of the administrative courts, for instance through further training events for the administrative court judges working there. Principles of constitutional law were discussed with judges of the Constitutional Court and of the ordinary courts.

The judicial system and the organisation of individual courts in Germany were taken up with considerable interest in Bulgaria as a model for success. The IRZ has been able to reach the majority of judges in senior positions with the seminars that have been held on this topic.

The IRZ's intensive consultation on the topic of "The information policy of the judiciary" has provided considerable support to the Supreme Judicial Council and to the press offices of the courts and public prosecution offices in drafting a communication strategy for the judiciary in Bulgaria, which was presented this year and is to apply until 2020.

The IRZ's work in Bulgaria is now focussed on promoting young people's contribution towards a democratic civil society. In order to do so, and in cooperation with the Vice President of Bulgaria, it is offering lessons in democracy and the law at German-speaking grammar schools in Bulgaria. In the context of the opening of one of these events, the IRZ was honoured by the Vice President in May 2015 for its lasting, successful commitment in Bulgaria.

Due to the deficiencies identified by the EU in the fields of criminal law and criminal procedure law, cooperation was highly intensive in these areas until 2014. The IRZ would like to continue to support its Bulgarian partners and to provide experience and expertise in a EU Grant project on victim protection. By involving experts from several countries, a platform for an exchange is to be created and cross-border cooperation made easier.

The IRZ would like to continue the education of young people regarding their contributions to democratic civil society and the rule of law in the context of democracy and law lessons in order to enhance the political self-confidence of the coming generation. The IRZ is working closely with the Vice President of the Republic of Bulgaria in this regard. There are plans for courses to be held at three more German-language grammar schools, as well as to support Bulgarian judges in drawing up an adapted teaching concept which can be generally introduced at upper secondarylevel in grammar schools.