Law and democracy course in Haskovo 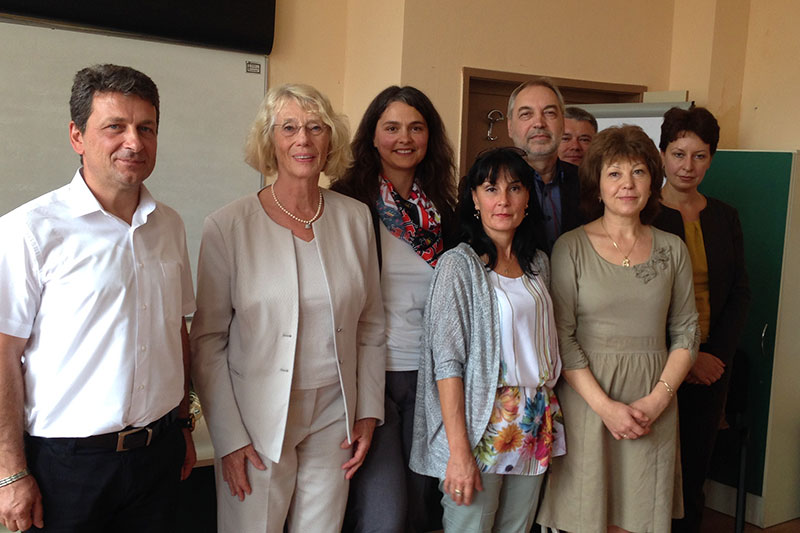 Project partners and guests at the opening of the democracy course in Haskovo: Dejan Janev, Headmaster of the local “Prof. Dr. Assen Zlatarov” high school; Ulrike Schultz, speaker; Kremena Ehrmann, IRZ (1st row, left to right); and Maria Angelova, Director of the regional court of Haskovo, and Ivan Panajotov, representing the Ministry of Education (2nd row on the right)

On 4 October 2016, the eighth event in the “Democracy and Law” series began at the “Prof. Dr. Assen Zlatarov” foreign languages high school in the Bulgarian city of Haskovo. After a traditional dance put on by a group of students to open the event, head teacher Dejan Janev welcomed the speaker, Ulrike Schultz, the IRZ and representatives from various institutions in the region. Kremena Ehrmann, the IRZ adviser for the cooperation with the Republic of Bulgaria, introduced the project, its history and the main focus of the course to guests and the press. Welcome speeches were also made by the regional representative of the Ministry of Education, the city's education officers and the Director of the district court of Haskovo.

In partnership with the Vice-President of the Republic of Bulgaria, Margarita Popova, the IRZ has been offering this course for sixth formers at German-language high schools since 2013. The school in Haskovo is the eighth high school to offer the course, after schools in Lovech, Blagoevgrad, Sofia, Pazardzhik, Razgrad, Kardzhali and Burgas. About 100 students in years 10, 11 and 12 are taught in three groups about the basic principles of democracy, state organisation and law. The objective of the four-day course is to raise awareness of law and democracy amongst young people, thereby supporting a highly motivated civil society of the future.

The programme is based on legal studies at the Ministry of Justice for the North Rhine-Westfalia region and was adapted especially to suit the circumstances in Bulgaria. The speaker, Ulrike Schultz, was until recently a senior professor at the department for German and European Constitutional and Administrative Law and International Law at the Open University of Hagen and plays a major role in the development of legal studies in the North Rhine-Westfalia region.

Bulgarian schools show a high level of interest in the course. The next course will take place immediately after this one, from 10 to 13 October in Smoljan.

A lesson in democracy and law in Burgas, Bulgaria

From 7 to 10 June 2016, a course in democracy and law was held for the senior years at the German-language Goethe High School in Burgas on the Black Sea. 80 students were divided into two age groups to be acquainted with topics including the basic structures of the law, the significance of the law and courts for the state and individuals, and state organisation and opportunities for participation in democracy. The programme is based on a legal studies curriculum of the Ministry of Justice for the North Rhine-Westfalia region and was adapted especially to suit the circumstances in Bulgaria. The lecturer, Ulrike Schultz, was until recently a senior academic staff member (Oberrätin) at the Chair of German and European Constitutional and Administrative Law as well as International Law at the state-maintained distance learning University of Hagen. She plays a decisive role in the development of the legal studies curriculum in NRW.

The headmistress of the high school welcomed the speaker in the presence of the students and expressed her thanks for the long-term involvement of the IRZ in this project, which is carried out in partnership with the Vice-President of the Republic of Bulgaria, Margarita Popova. The IRZ advisor for the cooperation with Bulgaria, Kremena Ehrmann, explained how the series of events came about and talked about previous achievements. Goethe High School is the seventh German-language school in Bulgaria to be involved in the project. The students benefit a great deal by taking part, since they learn about the principles of the rule of law and democracy by looking at practical cases in small groups, thereby increasing their self-awareness as citizens of a democratic state and as Europeans. The course is one of a kind in Bulgaria and is very popular at German-language high schools.

On 12 and 13 May in Sofia and on 16 and 17 May in Plovdiv, Bulgaria, the first two training seminars were held for the "Enhancing the efficiency of the public prosecutor's offices of Bulgaria and Romania in the field of dealing with victims of crime and promoting their cooperation with local and foreign victim support organisations" project. During these seminars, Bulgarian, Romanian and German public prosecutors were trained in how to deal with victims of crime in a respectful, non-discriminatory and professional way in accordance with Directive 2012/29/EU of the European Parliament and the European Council. Bulgarian investigators, police officers and representatives of victim support organisations in Sofia and Plovdiv also took part in the event.

The event opened with a presentation of the project, its objectives and the institutions and organisations involved. The subjects covered on the first day included how Germany implements the EU Directive and the other victim support standards that apply in Germany, as well as the legal framework and practical work in Romania and Bulgaria. The resulting problems encountered in practice and potential solutions were discussed and compared. On the afternoon of the second day, a learning session for trainers (train the trainer) was carried out. The objective of this session was to allow participants to pass on the knowledge gained during the seminar to their colleagues.

Four more seminars in Bulgaria and Romania, study trips and workshops are scheduled as part of this training programme. The next seminar will take place on 25 and 26 May in Bucharest. At the same time, there are also plans for other events to improve cooperation and networking as part of the project.

The IRZ is coordinating this project, which is co-financed by the EU Justice Programme and will run for two years. Its partners are the public prosecutor's offices for the Republics of Bulgaria and Romania and the "Weißer Ring" organisation.