From 11 to 14 April 2016 the sixth event of the series of lessons in "democracy and law" took place in Kardzhali in the south of Bulgaria at the "Hristo Botev" local foreign-language high school. The democracy course was initiated in 2013 by Margarita Popova, Vice-President of the Republic of Bulgaria, and has been carried out since then by the IRZ in cooperation with the Presidential Administration in Sofia.

In her opening address, Margarita Popova thanked the IRZ for its long-standing and sustained commitment and pointed out the important role of the high school in supporting and educating young people to become free and responsible citizens. The students and teachers of the high school as well as the district administrator and the mayor of Kardzhali and many representatives of the press were among the guests. The opening event was rounded off by a short supporting programme in German.

52 students of the 10th and 11th grades of the German-speaking department participated in the four-day series of lessons. The teachers teaching law and ethics at the high school could also benefit from the lecturer's experience and the teaching materials.

The topics included human rights, the rights and obligations of the individual as a citizen, the separation of powers in the state and the decision-making process in a democracy. The students were also interested whether their peers in Germany were particularly active in politics and society and which rights young people had in Germany. The lecturer, Ms Ulrike Schultz, was a senior academic staff member (Oberrätin) at the Chair of German and European Constitutional and Administrative Law as well as International Law of the state-maintained distance teaching University of Hagen. She has played a decisive role in the development of the legal studies curriculum in North-Rhine Westphalia, which is the basis for the democracy course in Bulgaria, and has been working as a lecturer for students and teachers, amongst others, for many years.

The series of courses is well-known and very popular among the German-speaking high schools in Bulgaria. The next course will be held in Burgas in June. 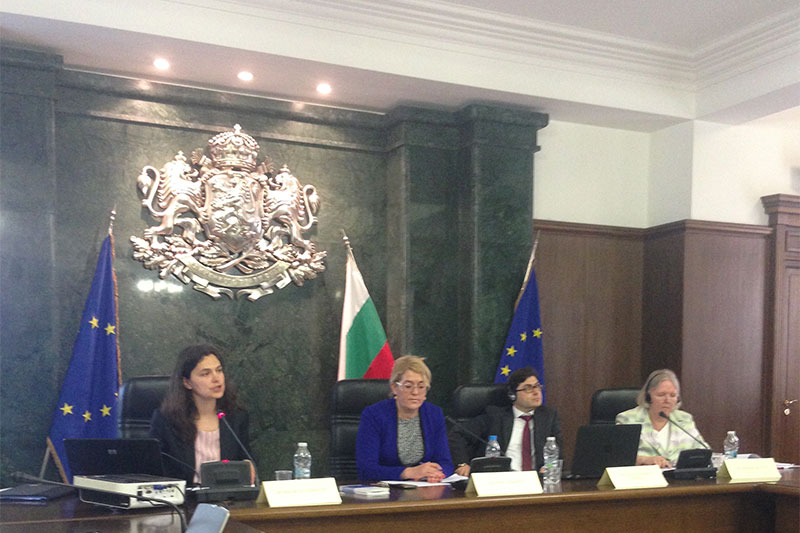 On 5 April 2016, the opening conference for the "Enhancing the efficiency of the public prosecutor's offices of Bulgaria and Romania in the field of dealing with victims of crime and promoting their cooperation with local and foreign victim support organisations" project was held at the Palace of Justice in Sofia. The IRZ is coordinating this project, which is co-financed by the EU and will run for two years. Its partners are the public prosecutor's offices for the Republics of Bulgaria and Romania and the "Weißer Ring" organisation.

The Bulgarian public prosecutor's office hosted the conference. Kremena Ehrmann, IRZ advisor for the cooperation with Bulgaria, opened the event with an extensive presentation of the project. As well as participants of the conference, representatives from the Germany embassy, Bulgarian victim support organisations and the press were also present.

Project leaders representing the partners introduced their organisations and explained their contributions towards its implementation. Victim support organisations in Bulgaria showed a great deal of interest and there were some lively discussions after the lectures.

One of the main objectives of the project is to raise awareness amongst public prosecutors and train them in how to deal with victims of crime in a respectful, non-discriminatory and professional way. In addition, guidelines for their daily work in this field are to be developed and better cooperation with victim support organisations will be established. Overall, it will be a matter of establishing networks and providing victims of crime and society in general with better information about rights and the help that is available.

To achieve this, a variety of activities will be required. Seminars will be held in Bulgaria and Romania to train 330 public prosecutors to deal with victims of crime in their everyday work.

Recommendations will be discussed and contacts established during workshops and round table discussions. Study trips are planned to allow the in-depth exchange of experiences. At the end of the project, information brochures on the rights of victims of crime and active victim support organisations will be produced and printed for Bulgaria and Romania.

A multidisciplinary approach is made possible thanks to the variety of professions held by the experts involved. As well as law professionals, mediators, police officers and psychologists are also involved in the project. Victim support organisations in Bulgaria will also support the work and take part in the planned activities.

The first seminars are scheduled for May and June. A closing conference, during which the results of the joint project will be presented, will take place in January 2018 in Bucharest.

Course in Democracy and Law in Razgrad, Bulgaria

The Vice-President of the Republic of Bulgaria, Margarita Popova, opened the course in democracy and law at the Ekzarh-Jossif high school in Razgrad on 29 September 2015 in the presence of the participants and the press. The course addressed students of the tenth, eleventh and twelfth classes. It ended on 2 October. In her welcome address the Vice-President pointed out the importance of democratic and legal awareness for the next generation of civil society. She also thanked the IRZ and the lecturer Ulrike Schultz, who attended some thirty students in this course, for her committed work.

After the course was held in Lovech, Blagoevgrad, Sofia and Pazardzhik, the high school in the northeast of Bulgaria is the fifth school in the country which benefits from this programme. The series of events is a joint project of the IRZ and the Vice-President of the Republic of Bulgaria. It has been taking place since spring 2013.

The programme is based on the legal studies curriculum of the Ministry of Justice of the Federal State of North-Rhine Westphalia, tailored especially to the situation in Bulgaria. Until recently, the lecturer, Ms Ulrike Schultz, was a senior academic staff member (Oberrätin) at the Chair of German and European Constitutional and Administrative Law as well as International Law of the state-maintained distance learning University of Hagen. She plays a decisive role in the development of the legal studies curriculum in NRW.

The lessons are intended to raise young people's awareness of the rule of law and democracy so that they will become highly committed citizens in civil society in the future. Hence, major programme topics are human rights, the rights and obligations of the individual as a citizen, restrictions on the state's actions and the decision-making process in a democracy.

This time Ulrike Schultz was supported by the local court and the municipal public prosecution office. The judges and public prosecutors prepared a moot court in German with the students which they discussed afterwards.

But also other authorities in Razgrad gave the IRZ and Ulrike Schultz a warm welcome. The head of the district authority invited the IRZ and Ms Schultz to learn about the contents and benefits of the course and about the cooperation of the IRZ with Bulgaria. She also presented interesting facts about her district on her part.

The "Course in Democracy and Law" project is meanwhile well-known in Bulgaria's schools all over the country. The IRZ has already received some requests to continue this course next year.