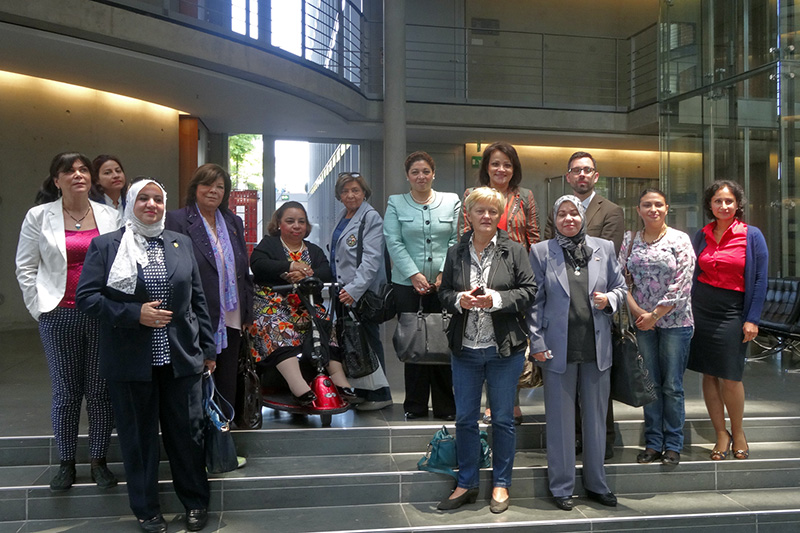 Visit to Berlin by a high-ranking delegation on the topic of women’s rights from 4 to 9 September: Discussions with the Chairperson of the Committee on Legal Affairs and Consumer Protection in the German Bundestag, MP Renate Künast (front row centre)

Setbacks in the development of the rule of law in Egypt have presented the IRZ with several challenges and raised fundamental issues. This applies to the pronouncement of hundreds of death sentences and long-term prison sentences against supporters of the Muslim Brotherhood and Freedom and Justice Party in court proceedings in which application of the rule of law is doubtful, as well as to the conviction of journalists with long-term prison sentences on the basis of doubtful evidence. In addition, serious restrictions on the work of the civil society must be viewed critically. The principles of the IRZ also apply in the cooperation with Egypt in the light of this: The project and consultancy work is undertaken in an objective, politically neutral way, and there is always special focus on compliance with internationally recognised standards and principles of the rule of law and human rights.

The IRZ therefore identifies strongly with the values of the rule of law connected with its mandate, with principles of criminal procedure under the rule of law and with principles of the freedom of the press, freedom of opinion and freedom of association. As a consequence, it was resolved in agreement with the German Federal Ministry of Justice and Consumer Protection and the German Federal Foreign Office not to continue the cooperation in 2015 for the time being and to await further developments. In 2016, talks were resumed with the Egyptian Ministry of Justice about a continuation of the cooperation.

Increased support of civil society is intended alongside the cooperation with state institutions, continuing the cooperation started in 2014, depending on the political situation and developments. The IRZ also wishes to involve state institutions such as the Parliament or the National Women’s Council. The first event with representatives of civil society, Parliament and the National Women’s Council took place in the reporting year.

The IRZ plans to extend cooperation with civil society to issues related to fundamental rights and human rights. In addition, mediator training will be continued in cooperation with the judiciary on a broader basis. Over-all, continued cooperation will depend on whether and to what extent support of the development of the rule of law will be possible. The IRZ will therefore continue to monitor the situation in Egypt and coordinate future measures accordingly with the German Federal Ministry of Justice and Consumer Protection and the German Federal Foreign Office.