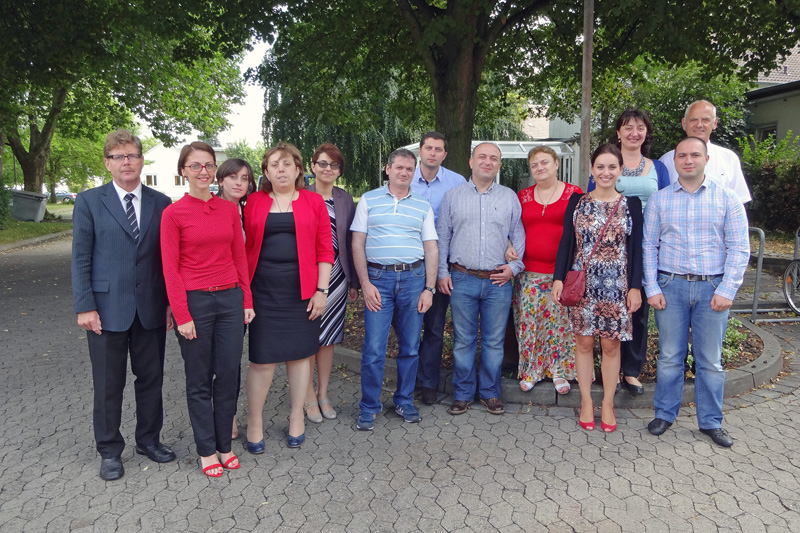 The penitentiary system is a particularly sensitive issue in every country. Georgia in particular has had massive problems in this connection in the past. Therefore, the Government has initiated major reforms to enhance prison conditions and to lay the basis for independent mentoring, internal official supervision and prisoners' rights to complain.

In June 2013, a comprehensive project was kicked off at the initiative of the Georgian Penitentiary and Probation Training Centre (PPTC) supervised by the Ministry of Corrections and Legal Aid in cooperation with the IRZ, with the aim of introducing a mentoring system into the Georgian penitentiary system. Two IRZ experts were involved from the German side, namely Dr Jürgen Herzog, Director of the Justizvollzugsschule Hamburg (ret.) (prison staff training centre) as well as Günter Schroven, Director of the Bildungsinstitut für Justizvollzug (penitentiary training institute) in Lower Saxony. A 10-strong Georgian study group was invited by the experts to visit the Bildungsinstitut des niedersächsischen Strafvollzugs as well as prisons in Wolfenbüttel and Sehnde in July 2013. Mentoring and training concepts as well as the necessary framework were subsequently developed, adapted to the Georgian penitentiary system and presented at a follow-up event in Sighnaghi. A programme tailored to the introduction of the mentoring and the selection and training of mentors was set up and adopted on this basis under the management of the two IRZ experts. Then, in early May 2014, Dr Herzog trained 20 mentors in Rustavi at the PPTC training centre at a five-day training course. This pilot training scheme informed the prospective trainees about the relevant legal basis, international standards as well as organisational, educational and psychological elements. The training furthermore covered issues of communication, cooperation, conflict resolution as well as handing on experience. As of now, the mentors not only convey knowledge, values and experience but also act as a link to the PPTC. The intention is that they will guarantee uniform standards across Georgian penitentiary institutions.

The system was officially introduced on 6 May 2014 at an international final conference organised by the IRZ, held directly after this training, where it was presented to the Georgian authorities involved, the interested public and international organisations. The Deputy Minister of Corrections and Legal Assistance, Ekaterine Kristesashvili, Dr Herzog as well as the Director of the PPTC, Maia Khasia, gave an account of their findings with regard to successful cooperation, the development process and the implementation of the mentoring programme. All parties pointed out the great importance of the cooperation between the PPTC and the IRZ for the development of the Georgian penitentiary system. One issue which was particularly emphasised was the strong commitment of the Georgian representatives, without which it would not have been possible to achieve such a positive result within such a short time.

The conference is a milestone in the efforts made by Georgian institutions towards enhancing their penal system. The first mentor-assisted training course for penitentiary staff can now start in June 2014. The IRZ will support the PPTC with the further implementation and provide guidance in dealing with any difficulties that could arise in the implementation process.