Visit of the Georgian Minister of Justice to Germany 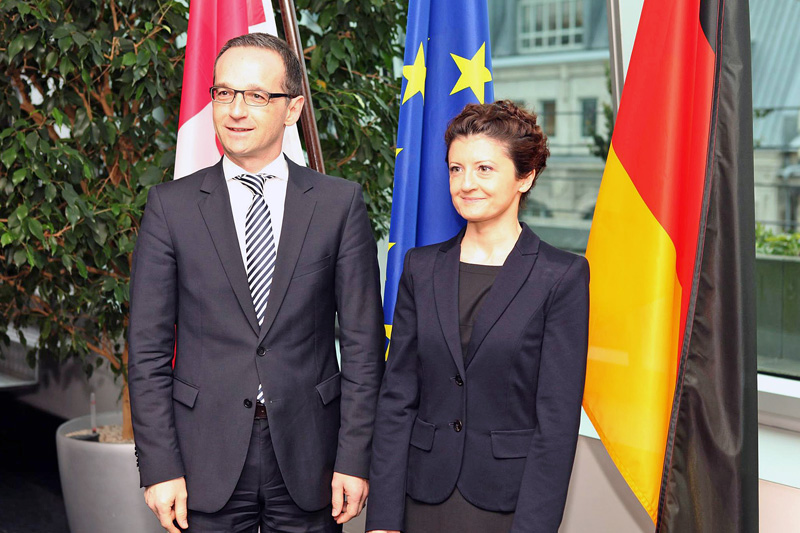 The Federal Minister of Justice and Consumer Protection, Heiko Maas with his his Georgian counterpart, Tea Tsulukiani

"A Path forward to European Integration – Building an Institutional Democracy in Georgia" - this was the motto of the visit of the Georgian Minister of Justice, Ms Tea Tsulukiani, who visited Berlin and Eschborn with a delegation of her Ministry from 1 to 5 December 2014. In various talks the Minister outlined the plans of her government to support the democratic institutions of Georgia, aiming to provide political stability on a long-term basis. This development is already visible as regards the division of competences between the government and parliament as well as through the de-politisation process within the judiciary. This reform and many further reforms are also necessary within the implementation of the EU Association Agreement, which was also discussed during the visit.

The official purpose of journey and the most important point on the agenda was the meeting with the Federal Minister of Justice and Consumer Protection, Heiko Maas. He received his Georgian counterpart to a talk about the current judicial reforms in her country. Furthermore, a memorandum of understanding on the implementation of joint reform projects between the Federal Ministry and the Georgian Ministry was signed. On the evening of 2 December a very large audience had gathered to listen to the Minister's presentation about the above-mentioned topic in the Senate auditorium of Humboldt University of Berlin. The audience were mostly students and young scientists from Georgia. They were welcomed by the Vice-President of the University, Professor Dr Michael Kämper-van den Boogart, and the Dean of the Law Faculty, Professor Dr Christian Waldhoff. The many questions asked during the subsequent discussion round showed the strong commitment and interest of the young legal professionals in the developments of Georgia. The Minister, who had spent many years abroad herself during her education and professional career, appealed to the audience to put the expert knowledge gained in Germany to good use in their home country.

The ratification of the Association Agreement by the German Bundestag was in the focus of the meetings with the Members of Parliament, Karin Strenz (CDU) and Christian Petry (SPD), in the German Bundestag. The Court President Monika Nöhre received the delegation in the Higher Regional Court of Berlin and gave an overview of the judicial administration in Germany. This topic was discussed further during the visit to the German Association of Judges. There, the Vice-President Andrea Titz, Judge at the Higher Regional Court of Munich, and Lothar Jünemann, Presiding Judge at the Regional Court of Berlin, discussed judicial independence in Georgia with the delegation, in particular a recently adopted Georgian law, which was received controversially by the judiciary. Further meetings took place at the Federal Chamber of Notaries, the Federal Ministry for Economic Cooperation and Development and the Embassy of Georgia in Berlin. The visit was jointly organised by the IRZ and the GIZ, since both institutions have been implementing legal reform projects with the Georgian Ministry of Justice. Therefore the agenda included a meeting with IRZ Director Dirk Mirow and a reception by the Vice-Chair of the GIZ Management Board, Dr. Christoph Beier, in Eschborn. This visit is also a good example for the hands-on cooperation between these two German legal advice organisations.