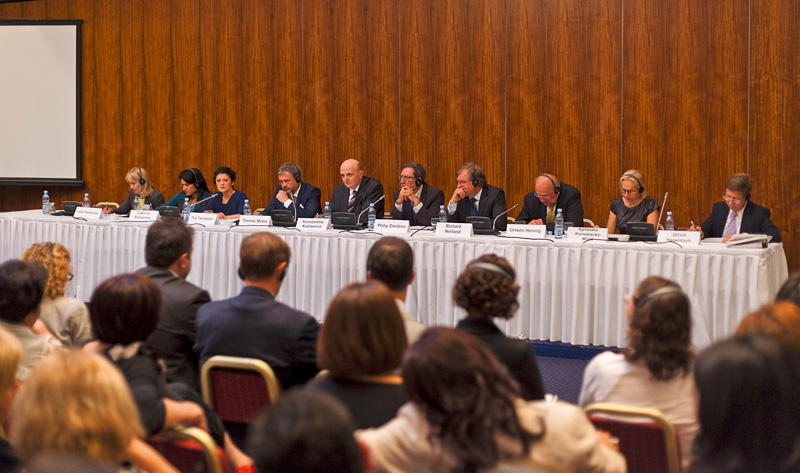 International conference on judicial independence in cooperation with GIZ, the Supreme Court and other organisations in Tbilisi

Georgia's domestic policy was also marked by notable changes this year. Despite the tense relationships between the government and opposition parties after the peaceful parliamentary elections in October 2012, the one-year cohabitation did not lead to a political blockade. In fact, it was possible to initiate some important reforms. Cohabitation ended after the presidential elections at the end of October 2013. Since then, Gregori Margvelashvili has been the new Head of State of Georgia. This further strengthened the role of the "Georgian Dream" alliance of parties, which had already won the parliamentary elections in 2012. The free, fair, peaceful elections and the ensuing transition of power were a further notable step towards entrenching democracy in Georgia. Because of an amendment to the constitution in 2012, the Head of the Government Iraqli Garibashvili, who has been in office since November 2013, now exercises the central functions in the State. His government is continuing the course that Georgia has set towards EU and NATO accession. Through a cross-party resolution on foreign policy of March 2013, the country has confirmed a Euroatlantic course and is not looking to join regional organisations such as the CIS and the Eurasian Union, the members of which do not recognise Georgia's territorial integrity. The first step towards the EU was taken in Vilnius at the end of November 2013 when the country initialled the Association Agreement with the EU; the final signing of the agreement is to take place by August 2014. However, the relationship with the Russian Federation is also to be normalised. A first step towards approchement took place in the first half of 2013, when Russia rescinded the embargo on wine, mineral water and various agricultural products from Georgia which had been imposed in 2006, and at least the economic relations between the two states were re-launched. In terms of domestic politics, the Government continues to intensively strive to strengthen democratic institutions and to carry out many urgent legal reforms. Additionally, local elections are to be held in 2014.

The IRZ has been working since 2006 with governmental and non-governmental institutions in the country on the basis of an agreement between the Georgian and German Ministries of Justice. The activity focuses on the support of legal practitioners, primarily in criminal law, by means of further training and through strengthening professional associations. Once more, the most important fields of activity in 2013 were the prison system, strengthening the legal profession and the judiciary, support for the Office of the Public Prosecutor General, as well as improving judicial training. The cooperation between the IRZ and its main partners, i.e. the Ministry of Justice, the Prison Ministry and the Office of the Public Prosecutor General, took place in an extremely open and constructive atmosphere. Among other things because of its geographical location, Georgia is also a suitable place for multilateral events. For instance in February 2013, an important conference took place for member states of the Hague Conference at which a discussion was held on the implementation of Hague Conventions. Roughly fifty participants from more than ten states in Eastern Europe and Central Asia, as well as Turkey, met in Tbilisi at the invitation of the IRZ, of the Georgian Ministry of Justice and of the Permanent Bureau of the Hague Conference.

The IRZ benefits in Georgia from the extraordinarily good, long-lasting relations between Georgian and German jurisprudence and legal practitioners, as well as from the considerable interest expressed in German expertise by the partners there. This is particularly fruitful. What is more, the legal policy framework has recently undergone considerable improvement. It has been understood in recent years that many fields of criminal law in Georgia urgently require liberalisation and reform. The stage was set for this by the change of government and thanks to the current general spirit of change in the country, since many central contacts, for instance in the Ministry of Justice, now also share this opinion. It was thus possible to tackle several fundamental questions and reform projects at conferences and further training seminars that were held in the country, as well as in specialist discussions in Germany, and in some cases these were discussed before a broad public. This controversial public debate between and also within professional groups, for instance judges, on fundamental reforms causes a major echo. For instance, the IRZ can enrich the domestic debate by providing an outside perspective.

Visit by a delegation of the Georgian Prison Ministry to Waldheim Prison,Saxony

The IRZ attaches primary importance to supporting the Georgian Ministry of Justice in 2014. The memorandum between the Ministries from 2006 is to be updated in 2014 in the shape of a new activity plan. In addition to the notary system, the implementation of juvenile justice was identified as a topic for this. Against the background of the immanent signing of the Association Agreement with the EU, it is likely that this will only be the first step among many legal harmonisation projects for which the IRZ will be offering its support. Given the large number of enquiries, cooperation will also be expanded to include new partners. For instance, cooperation is to be established between the Appeal Court of Tbilisi and a German appeal court in order to facilitate a long-term exchange of experience on criminal law problems in judicial practice. Support for the Georgian legal profession through their professional associations: The Bar and the Bar Association will continue to remain a focus of the activities. In particular the Bar, the board of which was re-elected in December 2013, is interested in continuing the exchange with the Federal Bar as its German counterpart. Together with the German Federal Bar, the IRZ is therefore planning a conference for lawyers in Tbilisi in which both institutions will be involved. The technical exchange with the Constitutional Court is also to be intensified in the shape of specialist discussions and a regional expert conference. Consultation is currently taking place on further prison system reforms, primarily within the framework of the abovementioned EU project, so that bilateral activities are only planned to take place on a small scale here.