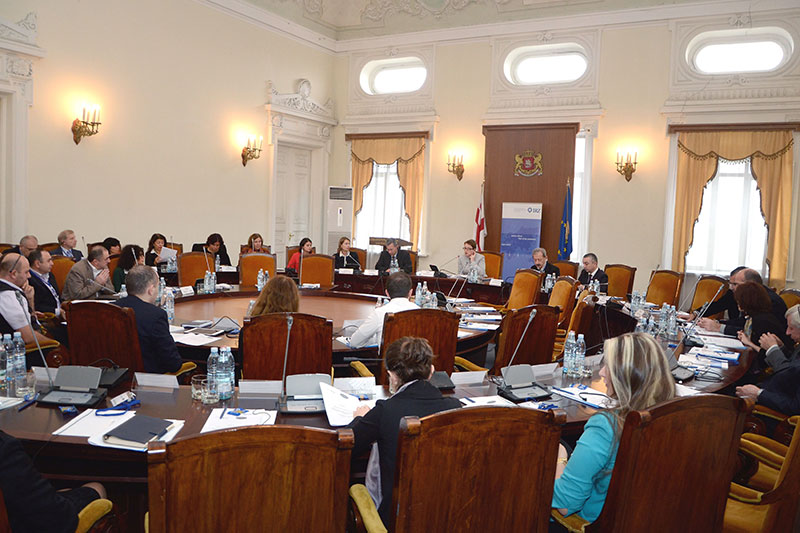 The integration of Georgia into Euroatlantic structures, as well as sustainable democratic development, are among the country's priority goals. Georgia is making efforts to conform to the standards of the Council of Europe in legal reform and in respect for human and minority rights. The country can already report considerable successes in many areas when it comes to reforms, including in the fight against corruption, as well as in the reform of the police and the judiciary. When it comes to judicial reforms, it is particularly a matter of ensuring the independence of the judges, modernising the court system and the law enforcement authorities and strengthening the rights of victims. The Government's further goals include expanding local self-government.

A major success on the path towards the approximation of Georgia to the EU was the signing of an Association Agreement in June 2014. The Agreement will however not finally come into force until it has been ratified by all Member States. Germany signed the Agreement with Georgia in 2015.

The IRZ works with governmental and non-governmental institutions in the country on the basis of a joint declaration between the Georgian and German Ministries of Justice, which was updated in December 2014 by a new working programme which is valid until 2017. The measures on further training and consultation on legislation that were agreed on in this programme are to strengthen the Georgian judiciary, and hence bring about greater stability, enhance the rule of law and increase respect for human rights. In thematical terms, this continues to be about criminal and criminal procedure law, the penitentiary system and human rights, as well as the implementation of international agreements in Georgia.

Cooperation with professional associations, particularly with the Georgian Bar, is progressing efficiently. An exchange of experience has been taking place for many years with the Federal Bar (BRAK), with support from the IRZ. In this framework, representatives of the Georgian Bar obtained information in 2015 on quality management in Berlin. Furthermore, the IRZ held a roundtable discussion on the regional exchange of experience with the Bars in Armenia and Georgia in Tbilisi this year, as well as a conference specifically for criminal defence counsel.

The projects are also being successfully continued with regard to improving legal training. Given the particular similarity of the Georgian legal system to the German legal tradition and the large number of particularly young lawyers with experience of studying or working in Germany, there is a considerable amount of interest in the German case-orientated teaching and work methodology. This is imparted within a variety of projects.

The implementation of the working programme of the respective Ministries of Justice will take priority in 2016. This entails, firstly, further support for the European law Directorate-General of the Georgian Ministry of Justice, as well as of the Centre for Crime Prevention. Secondly, a focus will be placed on further training courses concerning the implementation of the newly-introduced Juvenile Justice Code since the EU project previously dealing with it was concluded in 2015 and the IRZ is able to provide continuity in this area.

The cooperation with the Georgian Bar, the Supreme Court of Georgia and the Tbilisi Court of Appeal will naturally be continued. There are furthermore specific plans for projects to benefit the ChiefProsecutor's Office, the Ministry of Corrections and the Penitentiary and Probation Training Centre, which is subordinate to it. The IRZ has implemented a large number of measures with these institutions in the past, from which it will borrow.

An electronic German-Georgian criminal law portal will go online in 2016 in order to provide a sustainable platform for the academic debate on criminal law-related topics. This online journal will provide free access to academic articles, reviews of judgments and conference reports by Georgian and German authors to a broad audience.