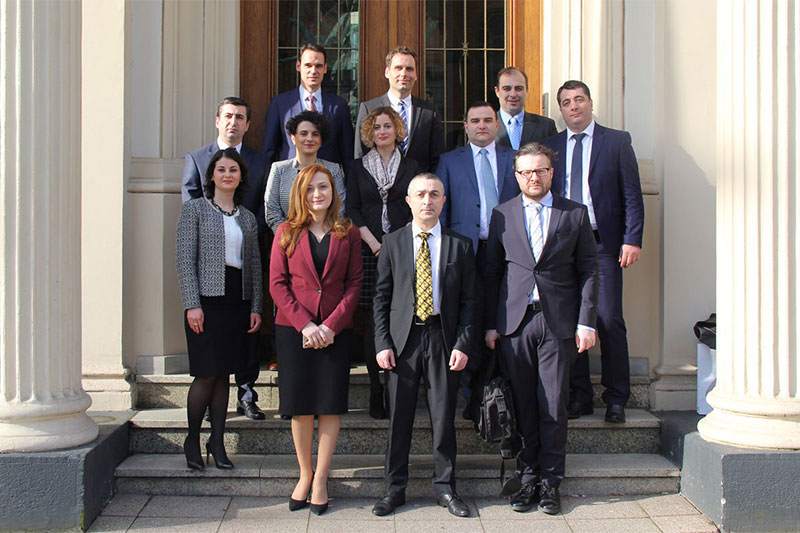 Participants of the delegation in front of the Ministry of Justice for the North Rhine-Westfalia region.

From 4 to 6 April 2016, a Georgian delegation led by the deputy chief prosecutor, Giorgi Gabitashvili, attended expert discussions in Düsseldorf and Cologne by invitation of the IRZ. This working visit took place as part of the long-standing cooperation between the IRZ and the Georgian chief prosecutor's office, which is undergoing a process of significant reform.

The delegation started its series of expert discussions in Düsseldorf, where the guests met with judges Dr. Michael Scholz and Dr. Mattias Nordmeyer and public prosecutor Christian Schoß. During the talks at the Ministry of Justice, the Georgian guests were given an overview of the system for assessing public prosecutors in Germany, which was of particular interest in view of the possible introduction of a similar assessment system in Georgia.

The programme was supplemented by a practice-oriented sharing of experiences with civil servants working for the German Office of Criminal Investigation, during which current issues concerning criminal law were debated. Various aspects of a potential cooperation between Georgia and Germany were discussed. Both institutions expressed the desire to continue and intensify their successful cooperation.