“Hate speech“ and “fake news“ are only two of many topics covering media regulation which were discussed on 18 October 2018 at an international expert conference in Tbilisi. The IRZ, together with the Georgian Media Development Foundation (MDF), organised this conference for about 60 participants, among them lawyers, in-house counsels, journalists and representatives of the executive and NGOs.

The event was opened by Teresa Thalhammer for the IRZ, Dr. Eka Beselia, Chairwoman of the Committee on Legal Affairs of the Georgian parliament, and Michael Fabri, Permanent Representative of the German Ambassador in Tbilisi.

The opening conference on “Modern Media Regulation“ was the first event in the project “@Media Societies – Georgia 2018“, which is financed by the German Foreign Office. Media experts from Georgia and the European Union will discuss selected regulatory issues and develop recommendations by the end of the year in different workshops under the scientific leadership of Thomas Wierny and Tobias Brings-Wiesen. To start the project, the organisers invited seven speakers from very different disciplines:

They gave the participants a comprehensive overview of current challenges regarding media regulation. They dealt e.g. with the planned reform of the EU Audiovisual Media Services Directive, currently under discussion at a European level, with opportunities and risks of an algorithm-based online communication and the difficulties of covering these in regulatory terms, and with alternative strategies of the German media regulating authorities in enforcing statutory regulations, for example the informal addressing of influencers.

Another important issue was the self-regulation of the media and media representatives in Georgia and in Germany, who are facing similar problems despite the different political settings in which they work. This was one of the topics of the final panel discussion, which also referred to the next steps in the project beyond the conference. As this opening event met with great interest it is expected that the workshop phase of the project will also be successful.

Link to the Facebook page of the project: @mediasocieties Georgia 2018

On 21 and 22 June 2018 an international conference on the topic “Challenges with regard to criminal law provisions on violence against women and domestic violence” (Comparative overview of the implementation of the Istanbul Convention) took place in Tblisi. The event was organised within the cooperation between the IRZ and the Ivane Javakhishvili Tblisi State University (TSU) and dealt with current topics of criminal law as well as important aspects of the reforms of the Georgian Criminal Code, which have become necessary in Georgia because of the ratification of the Istanbul Convention.

The conference was attended by representatives of the Georgian criminal justice system and professors of Tblisi State University. From Germany, Prof. Dr. Carmen Thiele, professor at the European University Viadrina, and Sebastian Sternberger, public prosecutor at the Public Prosecutor’s Office in Wuppertal, contributed to the conference. During the two working days in Tblisi the participants had the opportunity to report about their practical experience and to discuss academic and practical aspects of the various legislative norms which have to be implemented into national law upon the ratification of the Istanbul Convention.

The following topics were discussed: 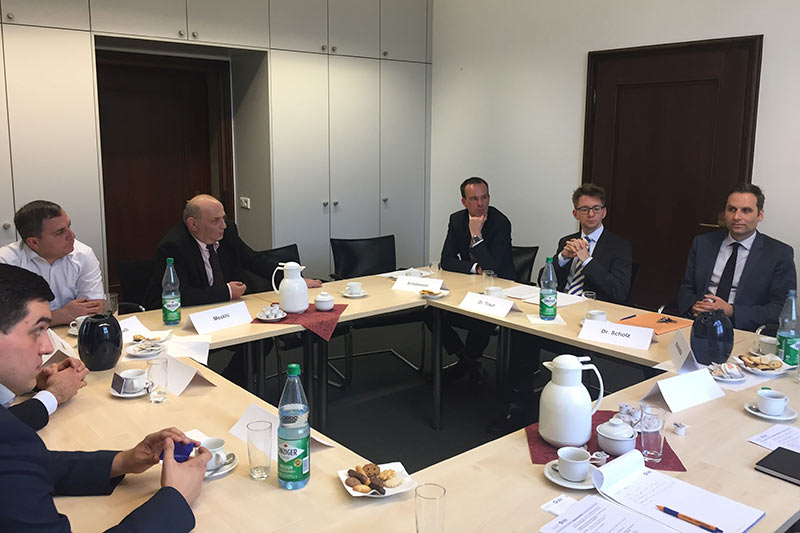 On 16 and 17 April 2018, the IRZ organised a working visit to Germany by a delegation from the Georgian court management system. The delegation included the Head of the administrative unit for general jurisdiction in Georgia, Shota Karchava, and his deputy, Giorgi Kakauridze. The visit began with expert discussions at the Regional Court of Düsseldorf. The Court’s President, Dr. Bernd Scheiff, welcomed the Georgian guests and informed them about subjects including the planning of new court buildings, court management, accessibility, safety and many other practical concerns.

The delegation also paid a visit to the Ministry of Justice for the North Rhine-Westphalia region in Düsseldorf. Here, members of the delegation discussed safety standards in the justice system and concepts for the establishment of a new courthouse with judges Dr. Michael Scholz, Dr. Ludger Traut and Dr. Phil Schabestiel.

The expert talks were considered by the Georgian guests to be very enriching and harmonious.