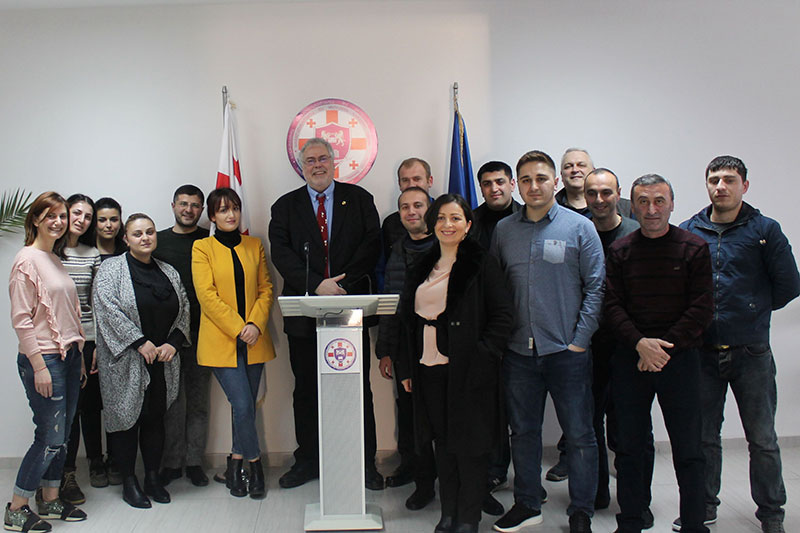 From 22 to 24 February 2018, a training course was held for aspiring trainers at the Georgian Penitentiary and Probation Training Centre (PPTC) in Rustavi, Georgia. The course dealt with the requirements for handling and caring for prisoners with special needs.

Employees working in various functions at penal institutions throughout the whole of Georgia took part in the training course, including:

In future, they should be able to hold further training courses for prison officers on these topics and therefore act as disseminators. The event was opened by the Director of the PPTC, Avtandil Mikanadze.

The Prison Director of the Karsruhe penal institution, Thomas Müller, attended the event as an IRZ expert and speaker. The speaker started by looking at enforcing long terms of imprisonment (planning, organisation, preparation for release, psychiatric problems amongst prisoners). Based on recommendations from the United Nations, he then talked about the process of dealing with prisoners with special needs:

The participants in this event were highly committed and motivated. During the group work, they started by identifying and discussing the problems involved in working with prisoners with special needs. Following on from this, they drew up some potential topics and objectives for training prison staff.

On 27 and 28 November 2017 the IRZ and the Georgian Lawyers’ Association (GLIP) organised a Round Table in Tibilisi on civil procedural issues regarding disputes in commercial and corporate law.

Dr. Hein Bölling, former Presiding Judge at the Hanseatic Higher Regional Court of Bremen, and Ruth Marie Mosch, lawyer, LL.M., both from Germany, participated in the event on behalf of the IRZ. They reported from their respective professional perspectives.

Ruth Marie Mosch is a lawyer specialized in arbitration and a member of the German Institution of Arbitration, for which she served as a Board Member for several years. Accordingly, the topic of her lecture was arbitration.

Dr. Hein Bölling spoke above all about the procedures in commercial law disputes in Germany and how these can be expedited.

The Georgian speakers presented the Georgian Investment Protection Act and reported about practical procedural problems and barriers in commercial law procedures. In addition, experience with arbitration in Georgia as well as the attractiveness of Georgia as an investment location for foreign investors were discussed.

With their attendance, the Georgian Deputy Minister of Economy and Sustainable Development, Irma Kavtardze, and Giorgi Khatidze, Member of Parliament and Member of the Parliamentary Legal Committee, also demonstrated the great interest in the topic.

All the participants were very interested and highly motivated. The exchange between the different professional groups was rated very positively since various perspectives could be heard and problems could be viewed from different angles.

„Law – made in Germany“: Workshop on Mediation in Tbilisi

The IRZ, in cooperation with the German Federal Bar Association and the Georgian Bar Association organised an event on mediation in Tbilisi, Georgia, on 17 and 18 October. Georgia’s legal system is making first approaches for an introduction of mediation as an alternative method of dispute settlement, which is mainly conducted by lawyers there. Therefore, the Georgian lawyers showed great interest in learning more about the German experience with mediation.

A one and a half day workshop took place on this topic as part of the initiative “Law – made in Germany“ addressing Georgian lawyers. Two Georgian lawyers, who are already certified mediators under the Georgian system, outlined the Georgian model of mediation through lawyers and their experiences made so far.

The German mediators Kerstin Gröne, a mediator and lawyer from the Cologne law firm Luther, her counterpart Jan Helge Kestel, a mediator and partner at the Erfurt law firm Caemmerer Lenz, and the President of the Bar Association of Thuringia, gave an overview of the legal provisions of mediation through lawyers in Germany. They also covered training and legal issues relating to the profession of mediation.

The focus, however, was on the practical aspects of mediation such as assessment of litigation risk and questioning techniques which were explained on the basis of case studies. Lively discussions and a vivid exchange of views ensued among the colleagues. The workshop was opened by Joachim Hecker, Head of the Divisions for Business as well as Legal and Consular Affairs of the German Embassy in Tbilisi, lawyer Dr. Veronika Horrer, Managing Director of the German Federal Bar Association, and Zaza Khatiashvili, President of the Georgian Bar Association.

This event was another cornerstone in the long-standing and productive partnership between the bar associations of Georgia and Germany, facilitated by the IRZ.