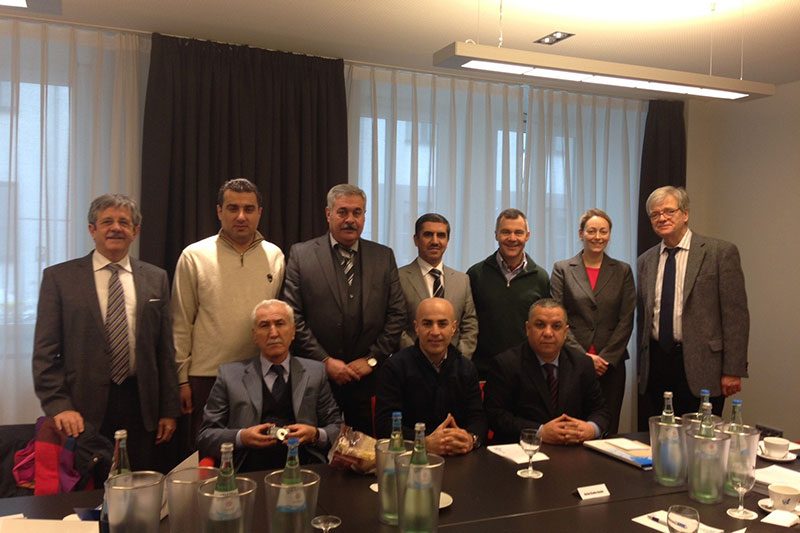 Representatives of the Kurdish delegation from Iraq with the experts Wolfram Eberhard (to the left), judge, ret. at Berlin-Tiergarten Local Court, and Karl Peter Puszkajler (to the right), judge, ret. at Munich Higher Regional Court, as well as the IRZ's project manager for North Africa and the Middle East, Patrick Schneider (3rd from right)

The political and economic starting situation for Iraqi Kurdistan worsened in 2015. With a population of approx. 8 million, Kurdistan offers a refuge for roughly 850,000 internally-displaced Iraqis and about 250,000 Syrian civil war refugees. At the same time, economic development which had been undergoing sustained improvement, suffered considerable losses, particularly as a result of developments in international oil prices, political differences with the central Government in Bagdad concerning the extraction of oil, as well as domestic political crises. Military conflicts with the "Islamic State" cost further considerable resources, albeit domestic security was maintained, particularly in comparison to the rest of Iraq, even though there was a heightened potential terrorist threat.

The IRZ continued its support of the Kurdish Ministry of Justice in the development of a new Law on Civil Enforcement in 2015. The initiative, taken up at the end of 2012 at the request of the Kurdish Government, aims to systematise the economically- and historically-outdated provisions of the existing (Central Iraqi) Law on Civil Enforcement and to reform it in such a way that it takes account of modern economic and social developments. The lack of protection of creditors' interests in the Law and in practice is equivalent to a major obstacle to investment, which is why the reform of the Law on Civil Enforcement conversely constitutes a major prerequisite for investment-friendly economic development.

The work that has been carried out to date on the draft of a new Law on Civil Enforcement led in 2015 to a completely reformed legal draft. On the Kurdish side, senior representatives of the Kurdish judicial administration, of the Parliamentary Legal Committee and of the Schura Council, which advises the Ministry of Justice, took part in this consultation.

The reform draft, which was drawn up with support from the IRZ, is currently being debated in Kurdish judicial and parliamentary circles. The results of the consultation and continued discussions will show whether the IRZ is to continue to operate in the Kurdistan/Iraq region in the field of civil enforcement law or in other legal fields.