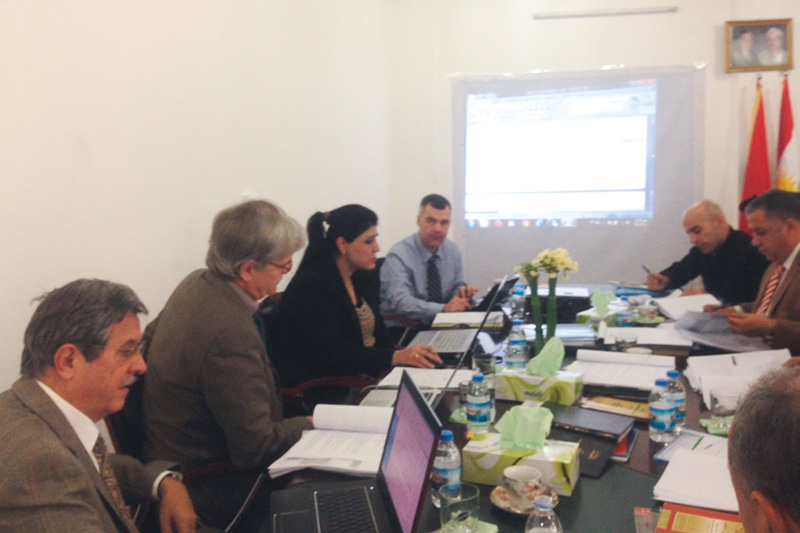 Advisory activities on the reform of the Kurdish Coercive Execution Act: German and Kurdish experts in discussion

Whilst a fresh wave of violence swept Central Iraq in 2013 with increasing numbers of assassinations, attacks and victims among the civilian population, the security situation in Iraqi Kurdistan remained largely stable. This fact has had a major positive influence on economic development, which the Kurdish Government is promoting heavily. Particularly also referring to the security situation, the Kurdish authorities are promoting Iraqi Kurdistan as "the new Iraq".

The IRZ has supported the Iraqi and Kurdish authorities in recent years by organising study visits for members of the judiciary within the "EUJUSTLEX-IRAQ" EU Rule of Law Mission, which was concluded in December 2013. For the continued cooperation, however, new approaches have now arisen in the areas of civil law and civil procedure law. The ongoing economic growth in the Kurdistan Region led amongst other things to a considerable need for modernisation in legislation and in the administration. A particularly relevant field in this context is coercive execution. The statutory basis is out of date, and official enforcement suffers from considerable shortcomings. This ultimately hinders investment to a degree which should not be underestimated. Reliable prospects that a claim can be recovered through the courts or public authorities constitute an essential criterion for assessing legal certainty on the part of potential investors.

At the end of 2012, the Kurdish Ministry of Justice requested the German Consulate General in Arbil to help procure German support for the reform of the law on coercive execution in Iraqi Kurdistan. The work, which already commenced in 2012 and is funded by the Institute for Foreign Cultural Relations (IFA), was continued in 2013. Two German experts with many decades of professional experience drafted a new version of the statutory provisions in the capital of Arbil, together with the Kurdish Ministry of Justice, coercive execution authorities and Parliament. During two intensive working visits to the region, and prepared by expert reports drawn up in Germany, German and Kurdish legal experts discussed both the underlying philosophy of coercive state measures and their practical implementation. In order to obtain a realistic impression of the circumstances in the region, they also attended several coercive executions and visited areas outside the capital. The project is planned to be completed in 2014 with a redraft of the law on coercive execution.