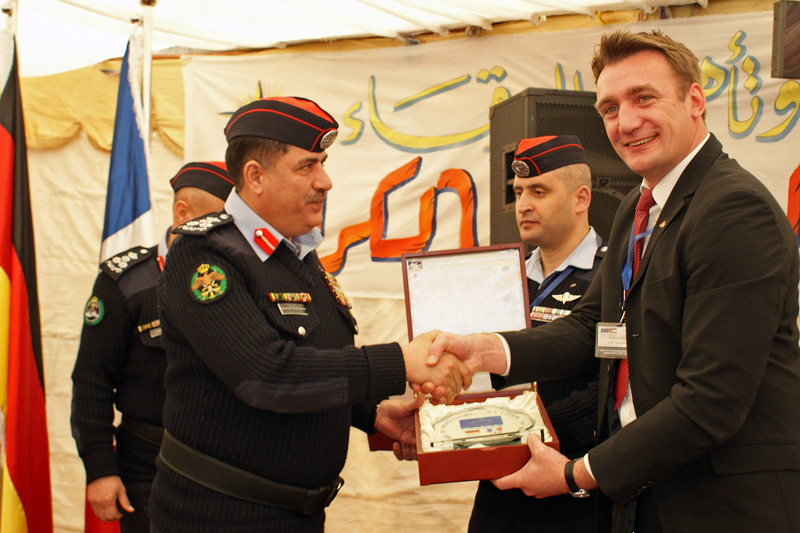 The success of the project was pointed out in final ceremony, here: gratitude for Torben Adams

On 23 January 2014 the final ceremony of the EU-funded Grant Project "Support to the Penitentiary System in Jordan" took place in the, concluding an outstandingly successful project after a two-year period, implemented by the IRZ as managing organisation in cooperation with the French partner Justice Coopération Internationale (JCI).

General Tawfiq Al Tawalbeh, Director General of Jordan's Supreme Police Authority, was the patron of the ceremony. The penitentiary system in Jordan is supervised by the Home Office and thus the Penitentiary Directorate of the Jordanian Police Authority was the beneficiary of the project. Among the honorary guests of the ceremony was the delegation of the European Union, represented by the First Counsellor Head of Operations Section, Mr. Ibrahim Laafia. The IRZ was represented by its Director Dirk Mirow. For the JCI its Director Karima Zouaoui took part in the ceremony.

The project with a total budget of more than € 1.5 million made an important contribution to the reform of Jordan's penitentiary system in terms of international and European standards, including improvements regarding the structures and the management in the Penitentiary Directorate and in the individual prisons. Two examples are the development and set-up of a data base for the management of all Jordanian prisons and the harmonisation of the electronic prisoner file with international standards. In this context, the training of the penitentiary staff also played an important role. More than 1,000 employees in total were trained in over 40 workshops and seminars for various daily fields of work. It was the first time in the Jordanian penitentiary system that a gender-specific training component based on the so-called "Bangkok Rules" of the United Nations was introduced as an extension to the actual project targets. Another component of the project was the further development of the transitional management and the post care for former prisoners and the support for their reintegration, for instance by creating training and job opportunities. As a basic requirement for this, the project initiated a close cooperation between the national institutions and civil society as well as with private industry. For instance, a first national "Post Care Unit" could be established and trained within the project for the field of social post care, in which the Jordanian authorities and non-governmental organisations closely cooperate and which has already been operating in several prisons in Jordan. Much more than was originally envisaged in the project targets was achieved through the project also in this area.

The project was run by the Team Leader Torben Adams working for the IRZ in Amman, who was deployed for this project from the prison authorities of the Federal State of Bremen. All in all, there were more than 20 long-term and short-term experts from Austria, Estonia, France, Germany, Great Britain, Jordan, Luxembourg, the Netherlands, Romania and Sweden who provided their expert knowledge for the project.

The success of the project, which sets an example for the further development of the penitentiary system in the region, was pointed out in the introductory speeches of the final ceremony. This success was brought about by the open-minded and trustful cooperation between the Public Security Directorate and the experts, and last but not least by the outstanding commitment of the Team Leader Mr. Adams.