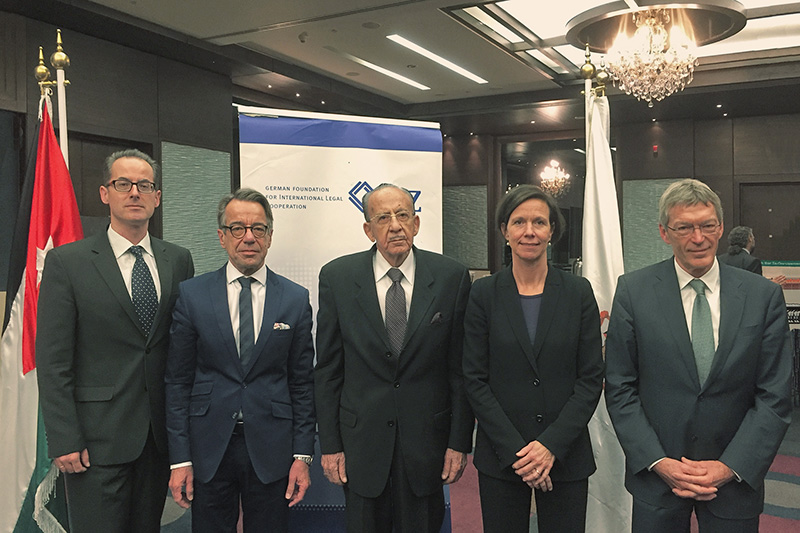 In spite of its relative political and economic stability in the Middle East Region, the Hashemite Kingdom of Jordan faces enormous challenges. The consequences of war events in the neighbouring countries Syria and Iraq place a particular burden on the country. The interruption of economic relations with Jordan’s trading partners in the region (e.g. Iraq and Egypt) and the presence of more than a million refugees from the neighbouring crisis regions, together with the growing risk of terrorism in Jordan itself, impose considerable economic and social pressure on the country. Consequently, security concerns clearly take increasing priority among the Jordan public over the grant of freedom rights. The weighing up of these concerns continues to constitute an extraordinary challenge for the rule of law in Jordan.

The results of the parliamentary election held in September 2016 with low voter turnout, which was conducted according to the new system of proportional representation and was mainly judged to be transparent by international observers, led to hope for the continuation of the reform course in order to further work on strengthening the principles of the rule of law. In this context, the rule of law is one of several factors to reduce the causes of flight and migration in the entire region and thus deserves special attention for this reason.

Since the start of project work in Jordan in 2006, the IRZ has supported different institutions in the Jordanian judiciary by training measures and further training for legal practitioners. In addition, it promotes reciprocal specialist exchange by expert discussions at bilateral and multilateral level.

Right from the start of the IRZ’s project work, there has been close and trustful cooperation with the Judicial Institute of Jordan in the course of joint further training events for judges in all types of courts, amongst other things with the aim of strengthening the independence of the judiciary.

The IRZ endeavours to continually expand the group of its project partners in Jordan. Very good cooperation has existed with the Penitentiary Authority, which has been established as part of the Jordanian Police through the Ministry of the Interior since 2011. This cooperation was particularly intensified by an EU Project, of which the IRZ was in charge and which was implemented highly successfully, on the reform of the prison service in Jordan (2012 to 2014). Current cooperation continues to build on the further issues raised in the course of this project, in order to guarantee a sustainable approach as far as possible. This is intended as a contribution to the solution of existing problems in the prison system.

Since 2013, cooperation has existed with the Jordanian Constitutional Court, which was established just one year earlier, within the framework of regular specialist discussions in order to focus more strongly on the mechanisms for the safeguarding of human rights. Cooperation with the High Administrative Court of Jordan, which was established as recently as October 2014 within the reform of the administrative courts, commenced in 2015. The Jordanian Court of Cassation also took up the IRZ’s offer of cooperation in the reporting year and a first joint event took place in Amman. In addition, Jordan is regularly involved in multilateral events. This year, representatives of the Jordanian Parliament once again participated in the annual “International Conference of Parliamentary Committees on Legal Affairs” organised by the IRZ and the German Bundestag.

Cooperation with the project partners specified above, the Constitutional Court, the Court of Cassation, the correctional authority, the Judicial Academy and the Higher Administrative Court will also be continued in the forthcoming year. In this context, the trainings and further training measures on professional practice are not only addressed to individual legal practitioners, but increasingly also involve the multipliers working in the respective sphere (“train the trainer”).

The IRZ also intends to involve the General Prosecutor’s Office of Amman in the project work and to renew the cooperation with the Jordanian Ministry of Justice, especially with the Department of International Cooperation. Successful cooperation talks were conducted with both institutions in the reporting year.