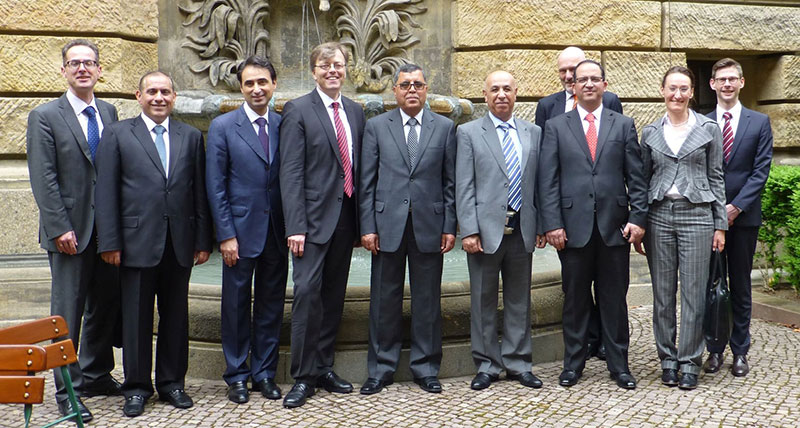 The Hashemite Kingdom of Jordan continues to enjoy relative political and economic stability in the Middle East Region, and is making committed, constructive attempts to support peace initiatives for the region. This is vital for Jordan given that it borders on Syria, Iraq and particularly also Israel and the Palestinian Territories.

The current efforts to modernise the country, as well as in favour of domestic reforms, are being actively promoted by King Abdullah II. These reforms led for instance to the establishment of a Constitutional Court in October 2012, which commenced operations in January 2013, as well as to the parliamentary elections in January 2013, in which the Election Act, which was amended in 2012, was applied, and which were implemented by an independent election commission.

The country however continues to face major political, economic and social challenges. The current political developments in the Arab world – and primarily in the neighbouring countries Syria and Iraq, as well as in the Palestinian Territories – pose a particular burden for Jordan. The military action has interrupted economic relations with Jordan's trading partners in the region (e.g. Iraq). At the same time, the presence of more than one million refugees from the neighbouring crisis regions – a massive number in comparison with the total Jordanian population of approx. six million – imposes considerable economic and social pressure on Jordan. Additionally, the influx from outside from the war areas causes the risk of terrorism in Jordan itself to grow. Against this background, security concerns clearly take priority among the Jordanian public over those of freedom rights. The weighing up of this set of problems constitutes an extraordinary challenge for the rule of law in Jordan.

The IRZ has been advising the institutions in the Jordanian judiciary in various legal fields for eight years now. Right back at the initial stage, cooperation in the bilateral field was supplemented by projects that were supported by the EU, thus broadening the spectrum of consultation.

A project on the protection of human rights in the judiciary, in the implementation of which the IRZ was involved from 2008 to 2010, has led to close, regular cooperation with the Judicial Institute of Jordan (the Jordanian Judicial Academy) in joint further training events for judges from all sections of the judiciary, as well as for public prosecution offices. Cooperation was commenced with the Constitutional Court, which was newly established in 2012. Since the Court's activity is still in its infancy, support and consultation are highly welcome. The Superior Administrative Court of Jordan, which was established as recently as October 2014 within the reform of the administrative courts, also has a similar need for support. The IRZ therefore also took up and intensified cooperation with the Supreme Administrative Court in the year under report. What is more, there is very good, close cooperation with the prison authority, which has been established as part of the Jordanian Police, via the Interior Ministry. This cooperation is primarily based on the results of an EU grant project, of which the IRZ was in charge, and which was implemented highly successfully on the reform of the prison system in Jordan, and was completed at the beginning of 2014.

Jordan is also increasingly involved in multilateral IRZ events as a partner country. Parliamentarians from Jordan for instance take part in the "International Conference of Parliamentary Committees on Legal Affairs" organised on an annual basis by the IRZ in cooperation with the German Bundestag. For the first time, Jordan was furthermore the host country this year of the annual multilateral conference on questions related to family law and economic law against the background of the Hague Conventions jointly organised by the IRZ and the Hague Conference on Private International Law. The participation of a total of six states from the MENA region furthermore helped to strengthen Jordan's position in the region. Cooperation with Jordan is promoted by the Federal Foreign Office.

The IRZ will continue to focus on cooperation with the Jordanian Constitutional Court as one of the main project partners in Jordan in 2016. New components that will be added are cooperation in the administrative courts, which is to be stepped up in the coming year. The Jordanian Judicial Academy has always been a highly-reliable project partner for the IRZ in recent years, so that the regular cooperation within joint further training events will also be continued in 2016. Here, the IRZ will primarily focus on the areas of support for judicial independence and impartial judgments.