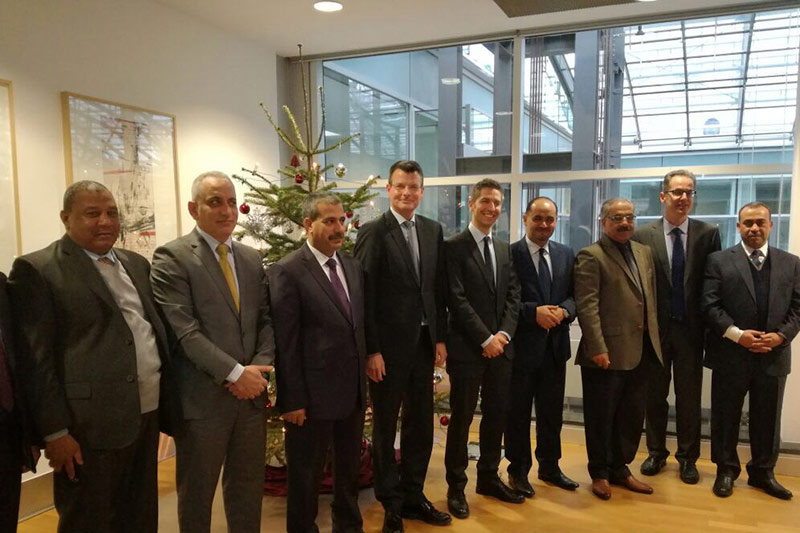 Welcome of the delegation at the German Federal Ministry of Justice and Consumer Protection by Under-Secretary Dirk Mirow, Head of Sub-Department II B Criminal Law (4th from left)

From 11 to 15 December 2017, the IRZ welcomed a delegation of representatives from the Public Prosecutor General's Office of Amman and other Jordanian court districts in Berlin to their first study visit in Germany. This was the first event in a project funded by the German Foreign Office as part of the Transformation Partnership kicked off at the end of 2017.

During all expert meetings the Jordanian guests expressed their wish for further exchange with German partners in transnational criminal offences, in particular regarding human trafficking, money laundering and the fight against organised crime.

From 27 to 30 November 2017, a delegation from the Jordanian prison authorities was invited by the IRZ to visit the Berlin Law Enforcement department to learn about "professional training and education for prison inmates". The visit took place within the framework of the institutional grant from the German Federal Ministry of Justice and Consumer Protection (BMJV) and was made possible thanks to the friendly support of the Berlin Senate for Justice and Consumer Protection.

As well as specific information on training and education for prison inmates, the study visit also aimed to provide a cross section of the entire law enforcement system of the Berlin prison authorities. Accordingly, various types of detention facility were selected for the delegation to visit. Under the leadership of the Director of the Jordanian prison authorities, the Jordanian delegation therefore visited JVA Moabit (central remand centre for male prisoners in Berlin), JVA Heidering (closed prison for male prisoners) and the open prison complex on the Robert von Ostertag Straße in Berlin.

The programme for the visit was rounded off with expert discussions at the Law Enforcement department at the Berlin Senate for Justice, Consumer Protection and Anti-discrimination. Here, the delegation was provided with more detailed information about the Berlin prison system, the training, qualification and employment opportunities for prison inmates and issues concerning the recidivism of prison inmates and the use of alternative penal sanctions.

In the individual institutions, the Jordanian guests were given a comprehensive overview of the learning and working facilities. Information on specific procedures in the individual types of correctional facility was also provided, in particular the specific features of pre-trial custody at JVA Moabit. At JVA Heidering, the delegation was given an insight into a correctional facility designed according to the most advanced standards, the comprehensive support and advice services for inmates and the cooperation between the JVA and various external parties (companies and independent organisations). The guests were particularly interested in finding out about the open prison system. This kind of prison does not exist in Jordan and is still viewed critically, mainly because of security considerations.

On 30 and 31 October 2017, the IRZ in partnership with the Constitutional Court of Jordan organised the third joint multilateral conference in Amman on current topics concerning the practice of constitutional courts. This event took place within the framework of the institutional funding provided by the German Federal Ministry of Justice and Consumer Protection. As in previous years, the IRZ once again involved experts from other partner states in the MENA region. As well as Jordanian and Tunisian constitutional lawyers, judges from the Constitutional Court of Morocco, which was only established this year, were also included for the first time.

The lectures and subsequent discussions at the conference dealt with the following subjects:

The multilateral exchange of opinions and experiences was extremely informative and instructive for all participants. This is especially true considering that constitutional jurisdiction is in various phases of activity in the individual partner states of the IRZ. The Constitutional Court of Jordan was set up in 2012, in Morocco it was this year, whilst in Tunisia they still need to introduce a constitutional court based on the already existing constitutional court act of December 2015.

However, all participants from the partner states were in agreement that the activities and experience of the German Federal Constitutional Court could generate extremely valuable momentum for the further expansion and development of constitutional jurisdiction in Jordan, Morocco and Tunisia.

The IRZ will therefore continue the series of multilateral conferences on the subject of constitutional jurisdiction in Jordan and in other partner states in the MENA region.