Expert talks with the Jordanian Court of Cassation in Amman

The intense discussions focussed on differences in the organisation of groundwork carried out by research staff. The Technical Office of the Jordanian Court of Cassation only works on more in-depth substantive legal reviews at the request of the Senate. A detailed expert opinion is provided, which has generally been processed initially by several research staff and is then discussed by the four legal members of the Technical Office and their head, a judge at the Court of Cassation. The research staff at the German Federal Court of Justice, on the other hand, work for the respective rapporteurs directly on the instructions of the Chairman of the Senate. The Jordanian contingent was surprised that, in spite of their allocation to a certain senate, no prior knowledge of the relevant specialist field for that specific senate was required and that they each only carried out their work for the senate for a period of three years.

There was a general consensus about the fact that in both legal systems, the preliminary work carried out by research staff only serves to support the Senates and it has no binding effect whatsoever. Following on from a presentation of gender distribution amongst research staff and judges at the German Federal Court of Justice, the questions from the Jordanian participants also concerned the number of women working in the German legal system.

As well as these questions, which were closely linked with the subject of the conference, the Jordanian participants, particularly the Presidents of the three Courts of Appeal, were also interested in issues concerning access to appeal, to arrangements for legal fees and costs and the right to legal aid.

During their stay in Germany, a high-ranking delegation representing Jordanian law enforcement agencies visited the IRZ in Bonn on 9 March 2016. The study visit took place as part of the European Commission's TAIEX support programme.

Under the leadership of General Mohammad Al Kharabsheh, Head of the Judicial Police Force at the Police Headquarters in Jordan, and Brigadier Sameer Bakeer, Director of the Prison Service in Jordan, the delegation learned about "Fundamental security measures and dynamic security concepts in penal institutions" during their visit to Germany from 7 to 11 March.

The guests also took part in expert discussions with the Bremen Senate for Justice and the Constitution, with the IRZ in Bonn, at the Higher Regional Court of Oldenburg, at the "Ambulanter Justizsozialdienst Niedersachsen" (a walk-in centre for legal and social affairs for Lower Saxony) in Oldenburg and at penal institutions in Bremen, Bremerhaven and Oldenburg. The leadership and organisation of the study trip was in the expert hands of Torben Adams, the prison director of a young offenders' institute in Bremen and a project leader at the Bremen Senate for Justice and the Constitution. As an expert for the IRZ, he devised the entire programme for the visit and accompanied the delegation to all their meetings. Torben Adams is an acknowledged expert in Jordanian penal institutions and between 2012 and 2014 was a team leader involved in the successful implementation of prison reform in Jordan, which was led by the IRZ and funded by an EU grant.

During the visit to the IRZ in Bonn, the guests were introduced to current developments and EU practices in terms of dynamic security concepts during enforcement, follow-up care or the reintegration of offenders, as well as to alternative penal sanctions, and their potential for application in Jordan was discussed. For the Jordanian guests, references to similar problem areas in other partner countries of the IRZ were also very illuminating.

Against the background of a significant increase in the crime rate, which is also related to the high levels of migration to Jordan from neighbouring crisis regions, the security aspect has definitely been brought to the fore for the Jordanian authorities, as well as for the Jordanian public as opposwd to alternative law enforcement measures. Weighing this issue therefore represents a major challenge for the future development of the penal system in Jordan.

Workshop on the Penitentiary Reform in Jordan 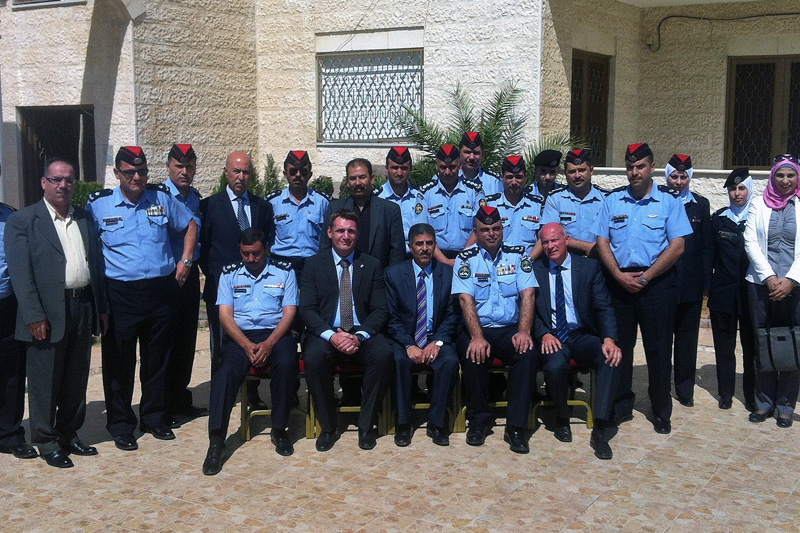 Speakers and participants of the workshop in Amman

A workshop on the topic „Post Care Advancement – A Comparative Approach" took place from 29th September to 1st October 2014 in Amman. Within three days, about 25 participants of the event, which was conducted by the Training Center of The Correction and Rehabilitation Center (CRCD, Jordanian penal authority), had an opportunity to compare the experience and development approaches in the Kingdom of Jordan with the after-care system for prisoners in Lower Saxony. This issue was followed by intense discussions with ideas on a further development in this area in Jordan and the participants drew up specific proposals. The event, attended by the staff of the CRCD and employees of several Jordanian NGOs, has to be seen in the context of the bilateral cooperation between the IRZ on the German side and the Public Security Department (PSD, supreme police authority) on the Jordanian side.

In January of this year, the EU grant project "Support to Penitentiary Reform in Jordan" with the IRZ as a lead partner of the Consortium was successfully completed after two years. As a follow-up, the IRZ plans to continue its cooperation with Jordanian penitentiary authorities on a further reform of the penitentiary system in Jordan. Based on the project results, the cooperation will be pursued in areas of particular importance within single project components. For this purpose, a series of mutual workshops with the PSD and CRCD are planned.

The workshop "Post Care Advancement" - the first event in this series - was conducted by the former team leader of the aforementioned EU grant project on the penitentiary reform Torben Adams and the Presiding Judge of the Higher Regional Court Dr. Stefan von der Beck, who had already participated as an expert in the mentioned grant project. Talks with high-ranking representatives of the PSD, emphasizing the mutual desire of a fruitful continuation of the successful bilateral cooperation, took place in the margins of the workshop.