Seminar on cryptocurrencies in Astana 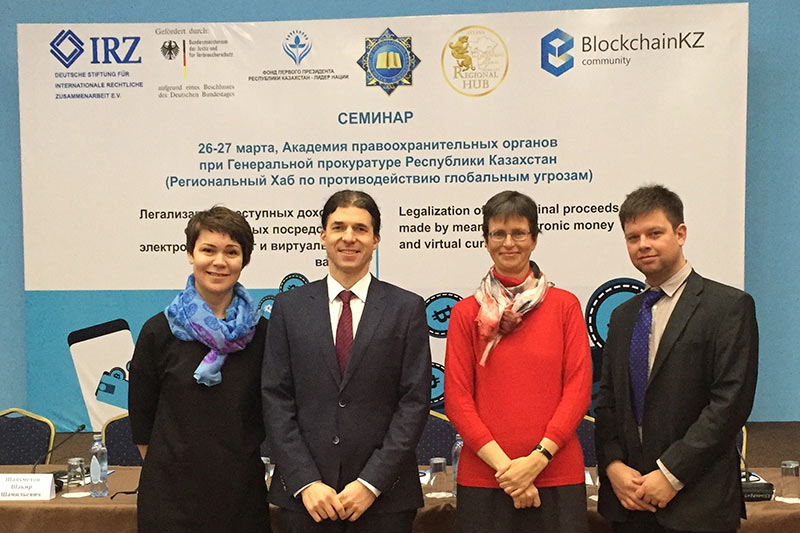 In partnership with the Law Academy for further education at the Public Prosecutor General's Office in the Republic of Kazakhstan, the IRZ organised a seminar on “The legalisation of criminal proceeds from electronic money and virtual currencies”, held on 26 and 27 March 2018.

The event was attended by representatives of state law enforcement agencies and the Ministry of Finance of the Republic of Kazakhstan, as well as representatives from the blockchain and cryptocurrency association of Kazakhstan. The IRZ, supported by an institutional grant from the German Federal Ministry of Justice and Consumer Protection, was represented by three German experts in the field. The German Embassy in Astana was represented by the liaison officer for the German Federal Criminal Police Office (BKA), Bärbel Engerer.

The main focus of the first day of the event was on “The application of blockchain technology”. The seminar was opened with a presentation of various virtual currencies and money transfer systems. The legal regulations for cryptocurrency markets and the risks and security loopholes were also covered. Peter Jentsch, a member of the 31/1 (Internet Investigations) department at the State Office of Criminal Investigation in Saxony, presented the basics of blockchain technology and the use of mixing services. Cai Rüffer, a public prosecutor at the German Centre for Combating Cyber Crime (GenStA Frankfurt), gave a lecture on the use of blockchains during investigations in dark net cases and on the cooperation between law enforcement agencies and companies offering bitcoin transactions.

The second day of the event was devoted to the topic “The investigation of offences in connection with the money laundering of criminal proceeds”. German experiences in the repayment of stolen assets and the legalisation of criminal proceeds were outlined by Karin Schreitter-Skvortsov, a manager and public prosecutor at the Public Prosecutor’s Office in Dresden. During her second lecture, she talked about the problems involved in investigating money laundering in connection with virtual currencies. Cai Rüffer presented some examples of investigations into the illegal use of virtual currencies.

The expert lectures were met with great interest by participants. This was reflected in the many questions and extensive discussions. A follow-up event has been requested by the Kazakh partners. This will look into the available options for investigating criminal offences, which have been committed using cryptocurrencies.