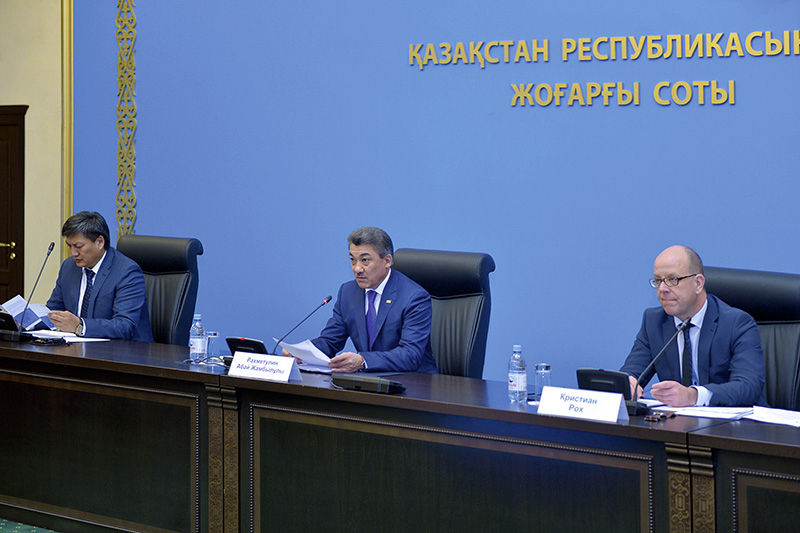 The European Union and the Republic of Kazakhstan signed an extensive partnership and cooperation agreement in December 2015. This continues and extends the EU’s Central Asian Strategy dating from 2007. Numerous EU projects in the sphere of the rule of law, business, education and the environment are supported and implemented. The IRZ also participated in an event of the EU project “Rule of Law” in 2016.

Early elections to the Lower House of Parliament (Mazhilis) took place in Kazakhstan on 20 March 2016. The President’s party “Nur Otan” was victorious in securing 82.15 % of the votes. Two of the opposition parties, “Ak Zhol” (7.18 %) and the “Communist People’s Party” (7.14 %), were once again voted into Parliament. According to the electoral authorities, election turnout was around 77.1 %.

The Republic of Kazakhstan celebrated 25 years of independence on 16 December 2016. Many events took place to celebrate this anniversary, amongst other things also including the Constitutional Law Conference, which takes place every year in August on the Day of the Constitution.

Since the end of 2009, the IRZ has supported the Republic of Kazakhstan with extensive judicial reforms. The IRZ has intensively supported the Kazakh partners in recent years with the reform of the Criminal Code and the Code of Criminal Procedure, which are amongst other things also oriented towards the German legislation. The consulting focus in the reporting year concentrated on the spheres of constitutional law, civil and commercial law, the administration of justice, criminal and criminal procedure law, and on basic and further training. In addition, the IRZ also conducted events on legislative procedure and patent and trademark law. The IRZ continued its intense cooperation with the General Prosecutor’s Office, the Supreme Court, the Constitutional Council and the Ministry of Justice.

The central focus of the joint events with the Supreme Court continued to be on the introduction of the investigating judge in criminal procedure and – regarding criminal law offences – in the distinction between criminal offences and regulatory offences.

In cooperation with the Ministry of Justice, the IRZ intensified consultations in the spheres of intellectual property and patent law.

Cooperation with the Kazakh partners in 2017 will continue to focus on consultations about the application of the Criminal Code and the Code of Criminal Procedure. In addition, issues concerning the appointment and qualification of judges and public prosecutors are likewise intended to receive further attention. The IRZ will also advise on the application of the new Code of Civil Procedure provisions. The intention is to continue the cooperation with the General Prosecutor’s Office, the Constitutional Council, the Supreme Court and the Ministry of Justice. Cooperation with the Chamber of Notaries and the Bar Association is intended to be resumed.