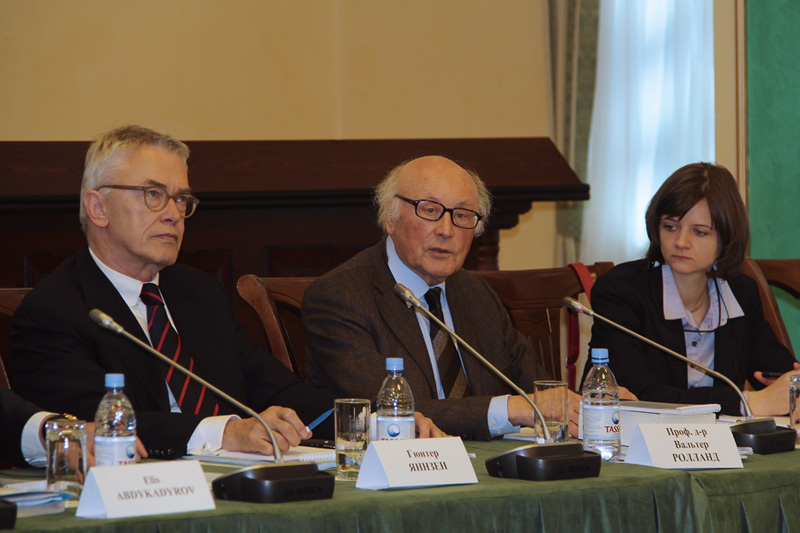 Roundtable on the application of the provisions of the Civil Code with the Supreme Court in Astana: Günter Jannsen, presiding judge at Oldenburg Higher Regional Court, and Prof. Dr. Walter Rolland, Director- General, ret., at the Federal Ministry of Justice (left to right)

The EU's Central Asia strategy entails increased European commitment in the region. At the same time, the Republic of Kazakhstan has an ongoing interest in approchement to the Western states. In order to promote legal and justice sector reforms, state programmes are being drawn up which are to act as guides for legal policy reforms. For instance, two projects were adopted in the context of the "Kazakhstan Strategy – 2050: A new political course of a new state" programme. One project provides for the further modernisation of the legal protection system from 2014 to 2020, whilst the other project, which will be running from 2013 to 2017, aims to combat religious extremism and terrorism.

The IRZ's consultation activities in Kazakhstan began at the end of 2009 with the Kazakhstan Year in Germany. Cooperation was broad from the outset, and borrowed from institutional and statutory reforms in Kazakhstan. In 2013 the IRZ successfully continued and intensified the partnership with the Office of the Public Prosecutor General, the Supreme Court as well as the Constitutional Council. In addition to topics of constitutional and civil law, there was also consultation on the reform of criminal and criminal procedure law. In cooperation with the Ministry of Justice and Parliament, the IRZ organised several successful multilateral events. The Chamber of Notaries, the Association of Judges as well as the Institute of Legislation of the Ministry of Justice, have been added as new partners.

The IRZ has been engaged for more than four years in effectively supporting Kazakhstan, as a state in Central Asia which is highly significant in strategic terms, in its efforts to modernise its legal system and to bring it up to international standards.

Cooperation with the Kazakh partner institutions for the year 2014 provides for final consultation on the Criminal Code and on the Code of Criminal Procedure, which are to come into force in Kazakhstan at the beginning of 2015. Furthermore, there will be consultation on the reform of the Code of Civil Procedure. There are already plans for events on mediation and on crime prevention, as well as a workshop for investigating judges.