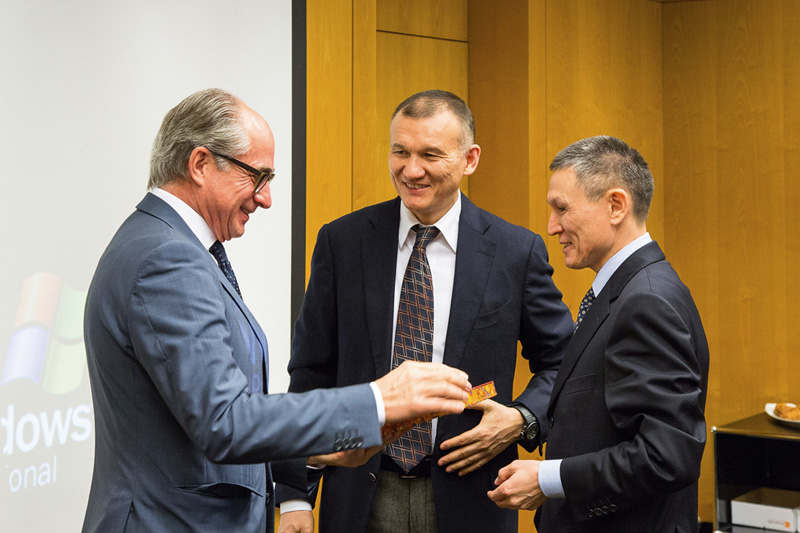 Working visit to Munich by a delegation of the Ministry of Justice on the topic of “Intellectual Property” with Berik Imashev, Minister of Justice of the Republic of Kazakhstan (centre), and Raimund Lutz, Vice-President for Legal and International Affairs at the European Patent Office (left)

The Republic of Kazakhstan is positioning itself in the long term as a strategically significant state in Central Asia. Within the state programme entitled “Strategy – 2050”, which provides for extensive, ambitious reforms in almost all societal and political areas, a comprehensive modernisation of the Kazakh legal protection system is planned. These reform efforts have become evident through a comprehensive restructuring of several laws. For instance, on 1 January 2015, amongst other laws, the new Criminal Code, the new Code of Criminal Procedure, the Prison Code, as well as the Act on Regulatory Offences, come into force.

The IRZ has been providing guidance to the Republic of Kazakhstan in comprehensive judicial reforms for five years. In 2014, the focus of the cooperation with the Office of the Public Prosecutor General, as well as with the Supreme Court, was on the final consultation on the reform of the Criminal Code and the Code of Criminal Procedure. Special attention was paid to the introduction of the investigating judge in criminal procedure, as well as in criminal misdemeanours. There was further consultation on the fight against terrorism and corruption, as well as on cybercrime. The IRZ stepped up its successful cooperation with the Constitutional Council in constitutional law and the administrative courts. The IRZ started new consultation with the Ministry of Justice in the field of intellectual property. It is to be continued in 2015.

Consultation on the application of the Criminal Code and of the Code of Criminal Procedure, which are to come into force in January 2015, and which will form the focus of cooperation with the Kazakh partner institutions in the coming year. Furthermore, the IRZ will be providing consultation on the reform of the Code of Civil Procedure. Finally, there are plans to hold events on the fight against corruption, as well as in the field of intellectual property.