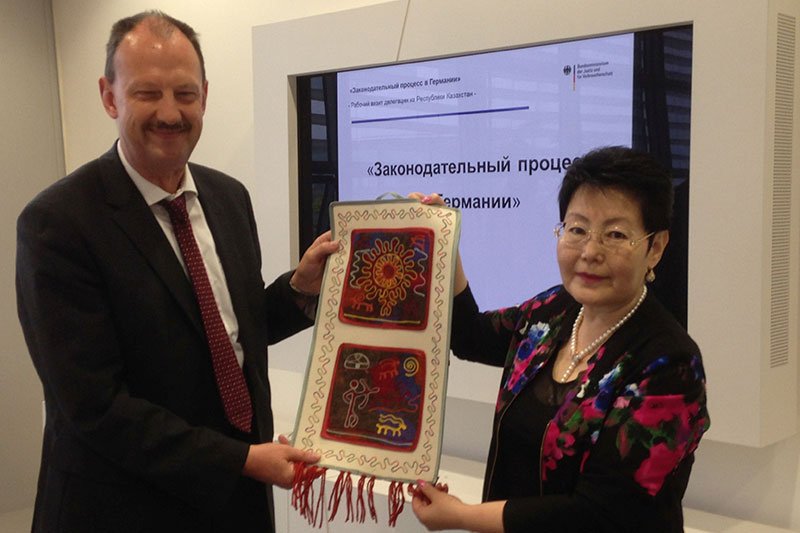 Working visit by a delegation of the Ministry of Justice of the Republic of Kazakhstan on legislative procedure and legal monitoring of normative legal acts in Berlin: Zauresh Baimoldina, Deputy Justice Minister of the RK, and Ministerialdirektor Alfred Bindels, Federal Ministry of Justice and Consumer Protection

Early presidential elections took place in the Republic of Kazakhstan in the spring of 2015. This led to five institutional reforms being announced in the "100 specific steps" programme. As well as modernising state institutions and promoting industrialisation and economic growth, this envisioned safeguarding the rule of law, as well as forming a transparent, accountable state. There was public criticism at national level of the fact that this programme provides for virtually no latitude for political reforms.

The protocol on Kazakhstan's accession to the World Trade Organization, which had been signed in the summer, was ratified by Parliament on 1 October. This paved the way for Kazakhstan to officially become the 162nd Member State of the WTO at the end of the year.

This is to further pursue the ambitious goal of belonging among the 30 most developed countries in the world in 2050.

The IRZ has been providing guidance to the Republic of Kazakhstan in comprehensive judicial reforms for six years. Amongst other laws, the new Criminal Code, the new Code of Criminal Procedure, the Prison Code, as well as the Act on Regulatory Offences, came into force at the start of 2015. The new Code of Civil Procedure was adopted by Parliament in September, and is to come into force from January 2016 onwards.

The focus of cooperation with the General Prosecutor's Office, as well as with the Supreme Court, was on consultation on the application of the new provisions of criminal law. Whilst the IRZ focussed intensively on the topics of the fight against terrorism and corruption, as well as criminal misdemeanours, in cooperation with the General Prosecutor's Office, the main focus of the joint events with the Supreme Court was placed on the introduction of investigating judges in criminal procedure, as well as on criminal offences in economic crime.

The IRZ continued its successful cooperation with the Constitutional Council in constitutional law and with the administrative courts.

In cooperation with the Ministry of Justice, the IRZ stepped up its consultations in the field of intellectual property and of patent law. A multilateral conference on the Hague Conventions took place in Astana in the autumn, also attended by participants from Tadzhikistan, Turkmenistan and Russia.

The focus of cooperation with Kazakh partner institutions for 2016 continues to be placed on consultation on the application of the Criminal Code and of the Code of Criminal Procedure. Furthermore, the IRZ will be providing consultation on the application of the provisions of the new Code of Civil Procedure. Cooperation with the General Prosecutor's Office, the Constitutional Council, the Supreme Court and the Ministry of Justice is to be continued. Events on the administrative courts will be held with the Union of Judges of Kazakhstan, which takes the chair in 2016. Cooperation with the Chamber of Notaries, as well as with the Bar, is to be stepped up.

Further topics for consultation will be the optimisation of the court system from a five-stage to a three-stage system of instances and the introduction of obligatory health insurance.