As part of the study visit, the Kazakh guests visited various authorities to find out about the relevant topics at first hand. The respective leaders of the authorities welcomed the guests personally and also took part in the expert talks:

The discussions at the Local Court of Sonthofen dealt with the classification of offences and crimes in German criminal law and with the accelerated procedure in practice.

Speakers at the Public Prosecutor’s Office reported on the enforcement of sentences in German criminal law and the various types of sentence. At the Regional Court of Kempten, the delegation learned about protective measures provided by the family court in cases of domestic violence.

Police involvement in domestic violence was discussed at the police headquarters for Swabia South/West. The delegation also learned about the cooperation between the police and various counselling centres. The study visit was rounded off with an opportunity for the Kazakh guests to visit a women’s refuge.

Seminar on “Criminal offences in the RK penal code” 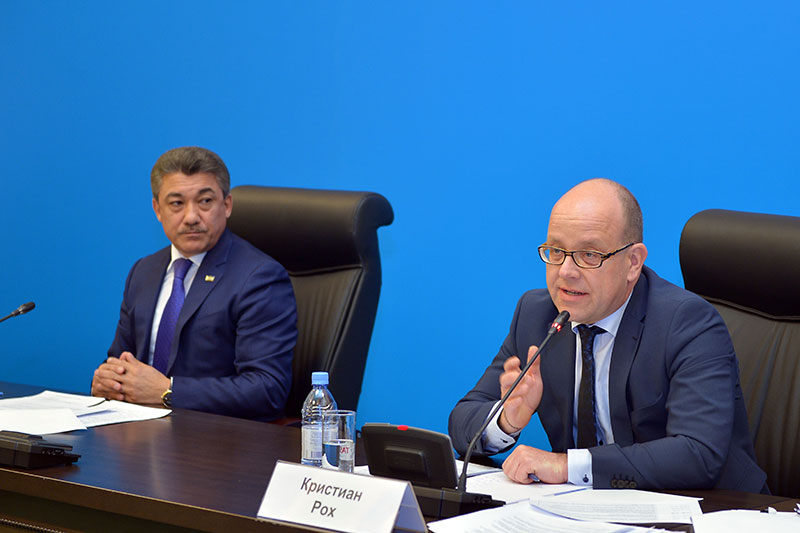 Christian Roch (right), a judge at the local court of Sonthofen, and Abai Rakhmetulin, Chairman of the criminal division at the Supreme Court of the Republic of Kazakhstan.

In cooperation with the Supreme Court of the Republic of Kazakhstan, a seminar was held in Astana at the end of October on “Criminal offences in the RK penal code”.

The term “criminal offences” was introduced in Kazakhstan with the reform of the penal code in 2015. The event focussed on the application of new legal standards in procedural practice. The classification of crimes and differences between criminal and administrative offences have repeatedly been discussed.

40 judges from various regions of Kazakhstan took part in the seminar, as well as representatives of the Public Prosecutor General’s Office, the Institute of Legislation, the Ministry of Justice and the Kazakhstan Bar Association. Christan Roch, a German expert and judge at the local court in Sonthofen, attended as the director’s permanent representative. In his lectures, he started by outlining European experiences of criminal offences. Mr Roch then looked at the particularities of the process for criminal offences in Germany.

A closing event is planned to take place in Germany in November in cooperation with the Supreme Court of the Republic of Kazakhstan.

As in previous years, the Constitutional Council of the Republic of Kazakhstan has organised an international conference on constitutional law. For the past few years, these events have been linked with important anniversaries. In 2016, this was the 25th anniversary of independence. The subject of this year’s conference, which took place on 29 and 30 August in Astana, was the “Constitution – the basis for the dynamic and stable development of society and state.”

The second day of the conference was held in parallel at the Eurasian National University and the KAZGUU University. University professors and representatives of the Constitutional Courts of Jordan, Moldova, Uzbekistan and Turkey were all given the chance to have their say.