The IRZ has been advising the Republic of Kazakhstan since 2010 on the reform of its criminal law. Since the new code of criminal procedure and the new penal code entered into force on 1 January 2015, this working visit was mainly about the practical implementation of legal standards and experiences of this in Germany, in particular as far as the judgement of criminal offences is concerned. 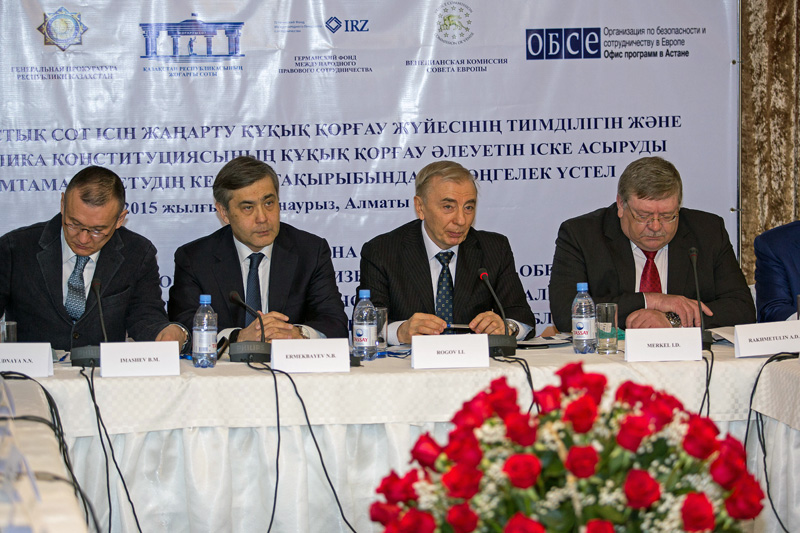 The conference was attended by high-level Kazakh representatives of the Presidential Administration, the Office of the Public Prosecutor General, the Constitutional Council, Parliament, the Ministries of Justice, Internal Affairs and Finance as well as of the Supreme Court, and representatives of the OSCE Astana, the United Nations and the Venice Commission. Dr Jürgen Oehlerking, retired State Secretary (Ministry of Justice of Lower Saxony) was involved from the German side with a contribution about the preliminary procedure in Germany.

The conference was a first exchange of experience gained after the new code of criminal procedure came into effect. It was kicked off with a presentation by Iogan Merkel (1st Deputy Public Prosecutor General), presenting the main amendments of the new code of criminal procedure, followed by a presentation of individual legal norms and a discussion of their application.

The IRZ has advised the Republic of Kazakhstan since 2010 about the reform of the criminal law. The new code of criminal procedure and the new criminal code came into effect on 1 January 2015. This year, the consultations will focus on the application of the new legal norms.

International Conference on the Fight against Corruption in Kostanay, Kazakhstan

From 12 to 13 February 2015 the IRZ organised the international conference "Legal Arrangements of foreign Countries in the Sphere of Civil Service and Counteraction of Corruption" in cooperation with the newly founded Agency on Civil Service Affairs and Counteraction of Corruption of the Republic of Kazakhstan and the Academy of Public Administration under the President of the Republic of Kazakhstan.

The conference focussed on international best practices in the fight against corruption and the practical consequences of these practices in Kazakhstan. There was a particular interest in the German contributions. The German experts participating in the conference were Jürgen Maurer, former Vice President of the Federal Criminal Police Office, and Bijan Nowrousian from the Public Prosecutor's Office in Kiel, who gave six presentations at the conference altogether and thus gave a comprehensive insight into the fight against corruption in Germany.

Apart from representatives of the Kazakh Prosecutor General's Office, the Regional Court of Kostanay and regional security and administrative authorities, speakers from the EU, Transparency Kazakhstan, UNDP and the US Embassy took part in the conference. A follow-up conference is planned for this year in Germany in cooperation with the Kazakh Anti-Corruption Agency and the Academy for Public Administration.