The Minister of Justice of the Republic of Kazakhstan and further members of the delegation pointed out how important the consultations in the field of intellectual property were for Kazakhstan.The German experiences, they continued, played a particularly important role.

The study trip marked the start of a cooperation between the IRZ and the Ministry of Justice of the Republic of Kazakhstan in the field of intellectual property, agreed between the Deputy Kazakh Minister of Justice, Ms Elvira Azimova, and the IRZ Director, Mr Dirk Mirow, on the sidelines of the Fourth Conference of the Ministers of Justice of the European Union and Central Asia in Astana in October 2014. 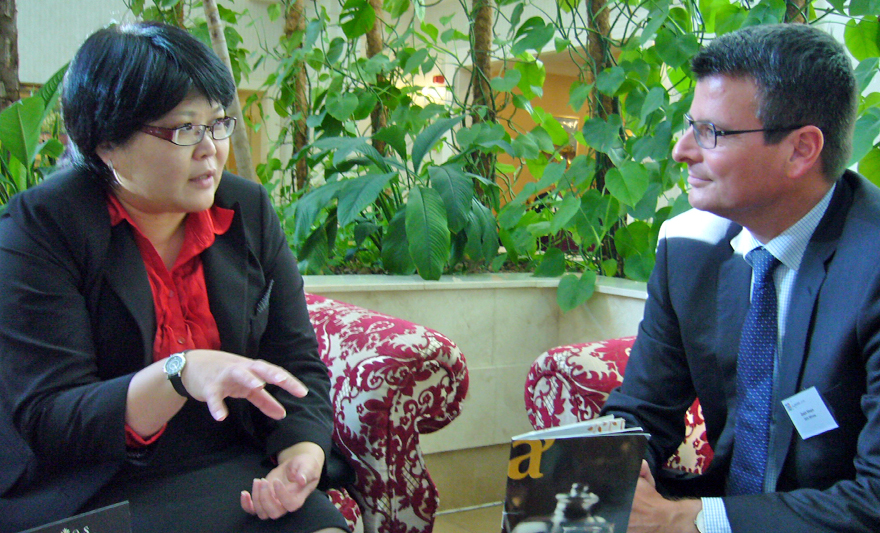 Managing Director of the IRZ Dirk Mirow while talking with the Deputy Minister of Justice of the RK, Elvira Azimova

The Fourth EU-Central Asia Ministerial Conference took place on 14 - 15 October, 2014, in the Kazakh capital Astana. The Ministerial Director Dr. Alfred Bindels represented the Federal Ministry of Justice and Consumer Protection. The IRZ participated in the discussion panel on issues of administrative law, which was moderated by the Managing Director Dirk Mirow and was attended by the experts Jörg Pudelka (Director of the Rule of Law Program of the GIZ in Central Asia), Gunärs Kutris (former President of the Latvian Constitutional Court) as well as Almat Gabbasov (Ministry of Justice in Kazakhstan). There was a consensus that the introduction of the administrative law in Central Asia would be highly significant for the development of a constitutional state. Gunärs Kutris reported that due to this trust of Latvian citizens in state authorities could be significantly increased after the change of system. Besides, the administrative control had resulted in considerable optimisation of quality and efficiency of the public administration. Those effects could also be transferred to other states. The states in Central Asia are particularly working on respective draft laws or reform plans are discussed.

The Ministerial Director Bindels and the Managing Director Mirow stressed that it is necessary to promptly implement the reform plans. Germany would further be involved as a coordinator of the EU Rule of Law Initiative in that process and would continue the good cooperation with Central Asian partners.

The Kazakh Vice-Minister of Justice Azimova and the Managing Director Mirow agreed on cooperation in reforming the intellectual property in Kazakhstan. 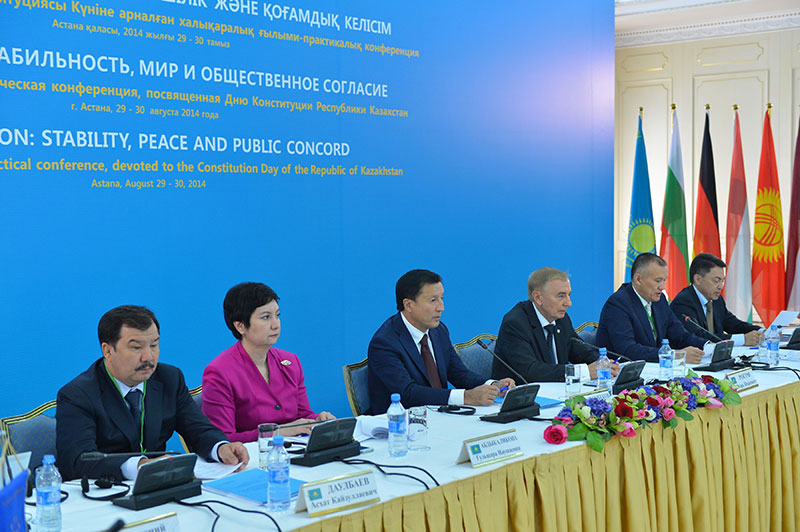 A. Daulbayev, Chief Public Prosecutor Republik Kazakhstan(RK); G. Abdykalikova, Vice Prime Minister of RK; A. Dzhaksybekov, State secretary of RK; I. Rogov, Chairman of the Constitutional Council of RK; B. Imashev, Minister of Justice of RK; A. Shakirov, Representative for Human Rights in the RK (from left to right)

An international conference on constitutional law took place in Astana on 29 and 30 August 2014 marking the Constitution Day of the Republic of Kazakhstan.

The IRZ has been cooperating with the Constitutional Council of the Republic of Kazakhstan since 2012 and has been invited to this annual international conference for the third time now. As every year, high-ranking state representatives gave presentations on the first conference day, while on the second day above all professors from universities and scientists of other institutions had the floor. Dr Lars Brocker (President of the Constitutional Court and the Higher Administrative Court of Rhineland-Palatinate) participated in the event with contributions covering constitutional law as well as administrative law.