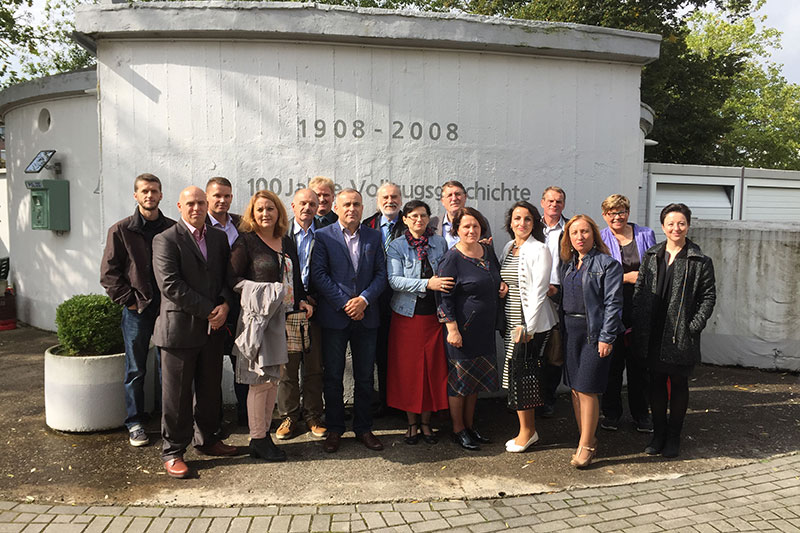 Participants of the study trip to Oldenburg, Wilhelmshaven and Vechta on the topic of “The prison system and the probation service”

Referring to UN Resolution 1244, which leaves open the final status under international law, the European Commission continued to classify Kosovo as a potential candidate for EU accession in 2008. At the same time, the European Union Rule of Law Mission in Kosovo (EULEX) was launched. EULEX supports existing rule-of-law structures by guiding, observing and inspecting in a multiethnic state. EULEX is the only EU mission to have its own executive powers in the justice and police fields. The mandate has been extended to June 2016.

The International Court of Justice found in July 2010 in a report which is not legally binding that Kosovo's declaration of independence was not in breach of international law. Kosovo so far continues to be denied membership of the United Nations and of many other international organisations.

The monitoring of the independence of Kosovo was ended in September 2012 and the International Civil Representative (ICR) was recalled, after Kosovo had created the constitutional and legal framework necessary for this.

The Government under President Atifete Jahjaga, which has been in place since December 2014, faces major challenges. The dissatisfaction of the citizens of Kosovo with the domestic political situation has increased continuously. An indication of this is the increasing numbers of people who have left the country, in particular in 2015.

Kosovo Justice Minister Hajredin Kuci visited the Federal Ministry of Justice and Consumer Protection in Berlin in June at the invitation of the IRZ. He was received there by Federal Minister of Justice Heiko Maas. In addition to discussions on the future cooperation between the two Ministries, an agreement was signed on judicial cooperation in criminal matters between the Federal Republic of Germany and the Republic of Kosovo.

The EU's Progress Report for the Republic of Kosovo, which was published in September, forms part of the "Enlargement package" adopted by the European Commission in November 2015. According to this report, Kosovo has achieved good progress in public procurement and financial control, as well as in other areas.

The Stabilisation and Association Agreement, which was signed in October 2015, and which is the first contractual relationship between the EU and the Republic of Kosovo, has also shown that Kosovo's institutions are able to implement political stipulations. When it comes to compliance with the requirements ensuing from this Agreement, Kosovo must however take considerable further steps, including in terms of the rule of law, the judiciary, public administration, electoral reform, Parliament, human and fundamental rights, minority protection, trade and the Single Market. In this context, priorities will in particular also have to continue to focus on combating organised crime and corruption, taking security measures for judicial staff and parties to proceedings, reducing the case backlog and compliance with provisions of procedural law.

The IRZ has been able to implement a large number of projects in Kosovo since 2001. The IRZ implements both bilateral cooperation activities and third-party-funded and twinning projects.

The two twinning projects entitled "Improving the Approximation of Laws and Coherence of the Legal Framework" and "Strengthening the Correctional and Probation Services in Kosovo" are currently still in the implementation phase. The competition for the twinning project entitled "Further Support to Legal Education Reform" was won in the autumn of 2015, and in content terms constitutes a continuation of the third-party-funded project of the same name, which is to serve the purpose of sustainability. This third twinning project was launched at the end of the year. The activities of the third-party-funded "Further Support to Legal Education Reform" project supported the Kosovo Judicial Academy in the areas of legislation consultation, as well as in the development of a legal library and court management, and was successfully concluded in September of this year after a term of 24 months.

The IRZ has organised large numbers of bilateral activities in the past three years. In workshops and seminars, it has stepped up its existing contacts with the Constitutional Court and the Supreme Court of the Republic of Kosovo, the Law School of the University of Pristina, the Kosovo Judicial Institute (KJI) and the Ministry of Justice.

As was already the case in the previous years, bilateral collaboration with the previous partner institutions is also to be continued and expanded in 2016.

There is a need to stress at this point the good, trust-filled contact with the Constitutional Court that was established in 2009, which the IRZ would like to continue to support through coordinated measures that are tailored to the special needs of this court to establish an independent constitutional court system. Enquiries have already been received for seminars and workshops. The IRZ places a further focus on cooperation with the Law School of the University of Pristina.