First Steering Committee meeting for the twinning project in Kosovo

The first Steering Committee Meeting (SCM) for the EU funded twinning project “Strengthening policy formulation and legislative drafting” was held at the Kosovan Ministry of Justice in mid February 2017. The existing cooperation and future objectives were discussed at the meeting.

Attending the SCM were Kosovan, German and EU project managers, as well as employees of the IRZ and of the Kosovan Ministry of Justice. During the meeting, positive comments were made in particular about the opening event held in November 2016 and the contributions already made by German experts from the judiciary in Pristina. The potential for more effective cooperation between project managers and all the institutions involved in the project was also discussed.

These meetings take place at the end of each project quarter. They serve not only to ensure that project objectives are reached and thereby guarantee the ongoing implementation of the project, but also to improve coordination between the parties involved.

This project is being led by the IRZ. Its main objective is to support the Kosovan Ministry of Justice and its subordinate institutions as they strengthen their skills in policy formulation and legislation. This includes the drawing up of political policy documents and draft legislation. The twinning project is therefore subdivided into the following four components: 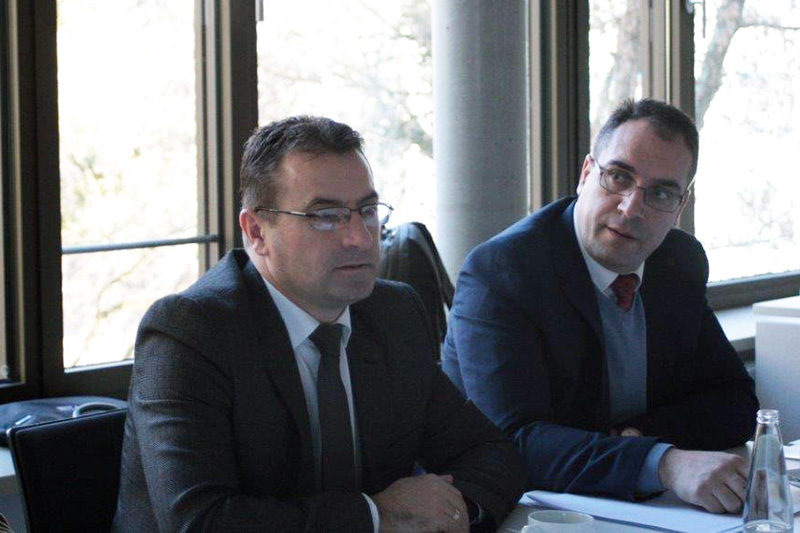 From 13 to 17 February 2017, eight important representatives from the Kosovan justice system made a study visit to Berlin and Brandenburg:

This high-ranking delegation wanted to familiarise themselves with education and further training in the German justice system. The visit was organised and supervised by an EU-funded twinning project, which the IRZ is currently leading at the Kosovan Academy of Justice along with its Dutch counterpart, the Center for International Legal Cooperation (CILC): “Further Support of Legal Education Reform”.

The Kosovan guests started by visiting the German Federal Ministry of Justice and Consumer Protection. Also on the programme:

Overall, the study visit helped to provide the Kosovan participants with an insight into some of the specific features of legal training in Germany, which could also be adapted in such a way that they can play a role in the transition from Judicial Institute to Academy of Justice in Kosovo:

The twinning project team at the Kosovan Academy of Justice would like to thank all those who made this study visit possible, in particular the President of the Law Students Examination Authority (Justizprüfungsamt) for Berlin-Brandenburg, Martin Groß, who played a very important role here.

Round table and lectures on constitutional law in Pristina

A round table, mediated by the IRZ, was held on the morning of 29 November 2016 between members of the Constitutional Court of the Republic of Kosovo, followed in the afternoon by lectures at the Law Faculty of the University of Pristina.

The German guests were warmly welcomed to the Constitutional Court of Kosovo by its President, Arta Rama-Hajrizi, her deputy, judge Ivan Cukalovic, and judge Selvete Gerxhaliu. The informal round table discussions served mainly to exchange thoughts and sound out topics concerning the continuation of the until now very successful cooperation between the IRZ and the Constitutional Court of Kosovo.

In the afternoon, there followed lectures for masters students at the Faculty of Law of the University of Pristina. Having been welcomed by the Dean of the faculty, Professor Dr. Haxhi Gashi, and the Vice-Dean, Professor Iliriana Islami, Professor Arnold began the series of lectures on the subject “Common Tendencies of Constitutional Law in Europe”. This was followed by a lecture on the “Integration of refugees in Germany – current situation and perspectives” by Nevila Saja. The students showed a keen interest in the lectures, making their own contributions and asking questions. The afternoon for masters students was moderated by Professor Enver Hasani, former president of the Constitutional Court of Kosovo.

To continue the successful and valuable cooperation, various bilateral measures are also planned for 2017 with these established partners of the IRZ.