On 4 and 5 October 2018, a joint conference was held in Thessaloniki, Greece, between the Constitutional Court and the Supreme Court of the Republic of Kosovo on “Constitutional complaints and current case law of the ECHR”. Together with the German expert, Prof. Dr. Jan Bergmann, Presiding Judge at the Administrative Court of Baden-Württemberg, Professor in Public Law, Constitutional Law and EU Law at the University of Stuttgart and a former employee of the German Federal Constitutional Court, the participants discussed the principles of constitutional complaints and the basic application of the European Convention on Human Rights as a whole over the two-day conference. They paid particular attention to the judgements relating to the EU Charter of Fundamental Rights, since, according to the German expert, these provided valuable insights into the interpretation of human rights principles. This is all the more relevant in view of the potential accession of Kosovo to the EU.

The Republic of Kosovo, which is not yet a member of the Council of Europe and therefore is not part of the ECHR in Strasbourg, refers directly to the jurisdiction of the ECHR in its constitution, thereby obliging its judges to take its principles and cas law into account when reaching a verdict. This means that the correct interpretation and application of judgements developed by the European Court of Human Rights in Strasbourg take on particular importance.

The timing of the conference was ideal, since it meant that newly appointed constitutional judges as well as existing constitutional judges were able to take part, giving them an immediate overview of the current case law of the ECHR. The same applied to judges at the Supreme Court, some of whom had also been recently appointed. As well as the judges, the President of the Constitutional Court, Arta Rama-Hajrizi, and the President of the Supreme Court, Enver Peci-Kryetar, also took part in the conference.

The event was once again organised as part of the proven cooperation between the Constitutional Court and the Supreme Court and will continue to to take place in this exceptionally high level format. 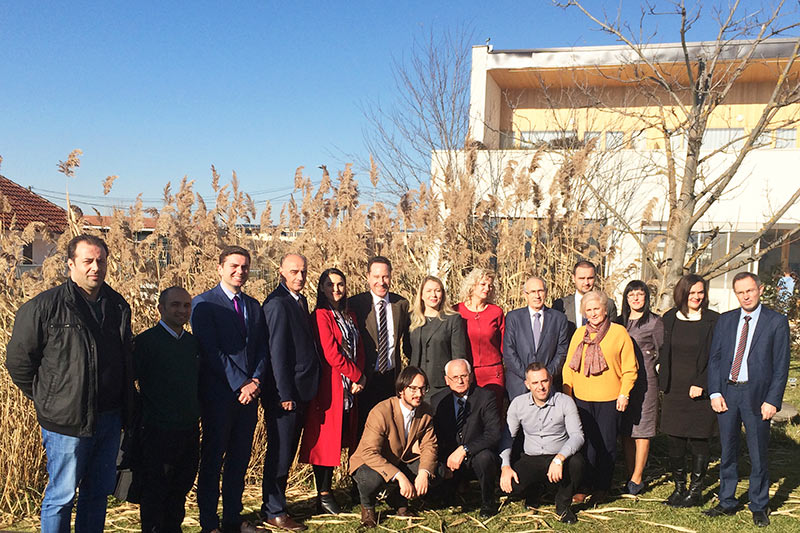 On 6 and 7 December 2017, the IRZ in partnership with the Kosovo Prosecutorial Council (KPC) held a second seminar for KPC members, Kosovan Prosecutor Generals, public prosecutors and press officers in Graçanica on “Publicity work and dealing with the media”.

The aim of the consolidation event was to review and discuss the current situation in Kosovo and then follow up the conclusions of the May seminar and discuss and find solutions for the outstanding issues and challenges. The IRZ was supported by the experienced speaker, Prof. Dr. Jan Bergmann, Presiding Judge at the Administrative Court of Baden-Württemberg.

The participants dealt with the following topics during the two-day seminar:

Also discussed were the basic structures, reasons behind and practical advantages of active and professional press work, the requirements of media representatives, the press code and the resulting duties of care. In addition, many crucial court decisions from German and European case law were also presented and lively discussed.

This follow-up seminar was met with a very positive response from all those involved. The participants were very interested and engaged and were able to discuss many practical issues from their daily work with each other and with the German speaker.

From 28 to 30 August 2017, a delegation from the Kosovan Ministry of Justice visited various judicial authorities in North Rhine-Westphalia to learn about their press and publicity work.

Within the framework of the twinning project Strengthening policy formulation and legislative drafting, the ministry officials from Kosovo visited the Ministry of Justice in Düsseldorf (see photo), the Higher Regional Court and the Administrative and Local courts in the capital of the North Rhine-Westphalia region.

The Kosovan guests had the opportunity to discuss the methods used in the German judicial authorities’ press and publicity work with the press officers concerned and to enhance their experience through dialogue.

The participants were particularly interested in the potential for electronic communications with citizens. The “Justice Online” project, which focusses in particular on the high value of information for citizens, was very well received by the Kosovan delegation, who appraised it as an outstanding example of good citizen relations worthy of imitation.

The two-year twinning project between the IRZ and the Kosovan Ministry of Justice is due to come to an end at the beginning of October 2018.