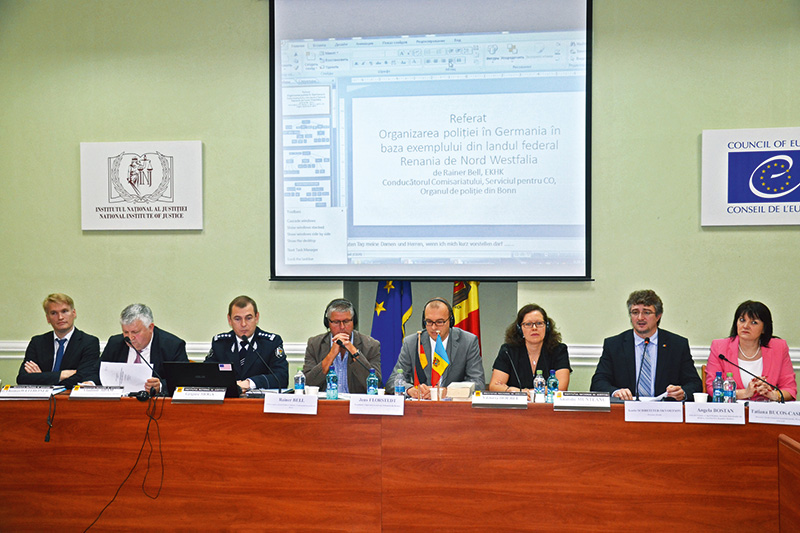 Germany is an important partner for the Republic of Moldova on its course towards Europe. In spite of continuing disputes about the right path, the Association Agreement with the EU has entered into force and could supply further impetus for legal reforms. Consultations carried out by the IRZ in the Republic of Moldova since 2005 to support the transformation and the reforms of the law and the judiciary are also highly valued in spite of all controversial domestic discussions and approaches to solutions, because German substantive law and procedural law have a role model function, particularly in the countries of the former Soviet Union. The legal policy discussion in the reporting year was influenced by criminal proceedings against the former Prime Minister and the election of the State President scheduled for the end of October 2016, who will henceforth once again be directly elected on the basis of a judgment from the Constitutional Court in the spring of 2016. In addition, other important topics in focus in the reporting year were the passing of a new statute on the Public Prosecutor’s Office and the consequent restructuring of the Moldovan Public Prosecutor’s Office. Last but not least, imponderables in connection with the long-delayed replacement appointment to the office of the Public Prosecutor General came into focus.

In the reporting year, work was once again carried out with the support of grants from the German Federal Ministry of Justice and Consumer Protection and project funds from the German Federal Foreign Office. The IRZ’s efforts, which have partly continued for years, have for instance been considerably intensified for the spheres of constitutional court jurisdiction, judicial reform and the Public Prosecutor’s Office by three projects financed by the EU.

One clear focus in 2016 was on cooperation with the judicial institutions with regard to practice-oriented further training for civil judges and criminal judges. Although an Administrative Code has still not been passed in spite of preliminary work over many years which has received specialist support from the IRZ, a draft of this Code has at least been introduced into Parliament. It remains to be seen whether and when this will be passed. Preparation of future administrative judges has nevertheless begun by further training in various spheres of administrative law and procedural law in advance of their new tasks. Even if an Administrative Code were not passed in the foreseeable future, administrative court proceedings will increase in future in the Republic of Moldova.

The IRZ also commenced consultations on the reformation of the criminal procedure law in particular at the special request of the Deputy Minister of Justice of the Republic of Moldova.

Last but not least, there was also great continued interest in the supplementary studies on the introduction to German law with its European references, which were started in 2014, in cooperation with the Faculty of Law at the State University in the reporting year.

The entire sphere of further training for judges will continue to play an important role in the cooperation with the Republic of Moldova in future. There is still a great requirement for action and further training in the technique and structure of the work of judges. At the express request of the Deputy Minister of Justice, consultations on the reform of criminal procedure law will probably receive greater attention in future. If Parliament passes the draft of an Administrative Code, the IRZ will also continue consultations on this and cooperate in its implementation. Legislative consultation on other individual reform projects will continue to form the focus of attention, together with the issues of legislative technique and legislative impact assessment already dealt with in the past. The cooperation in the sphere of the precautionary administration of justice, in particular with notaries and lawyers, will be continued. The study course on the introduction to German law at the State University has been very well received by the Faculty of Law and students alike, and will also be continued.