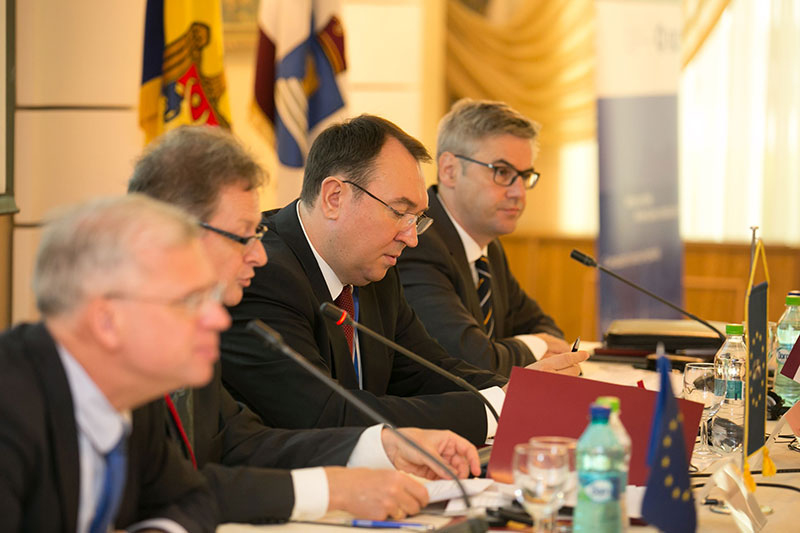 After signing the Association Agreement with the European Union in June 2014, and the parliamentary elections in November of the same year, in which the pro-European parties obtained a majority of the votes, a foundation had been created for continuing the course of reforms in 2015. Having said that, the country was considerably shaken in May of this year by a large-scale banking scandal. The domestic political unrest, with protests among the population, led at the end of October to the Government being overthrown by a parliamentary vote of no-confidence. The further political development is difficult to assess. It will also be necessary here to await the outcome of the presidential elections in 2016.

The overall situation also makes the reforms in the legal and judicial fields difficult. It clearly shows how important it is to work out safe legal foundations which correspond to European legal standards. What is more, however, there is also a need to pay particular attention to implementing and applying the laws in a manner that is in conformity with the law.

Cooperation between the IRZ and its partner institutions in the Republic of Moldova went according to plan and was successful despite the abovementioned domestic political difficulties. Quite a number of the joint measures were implemented in the "Promotion of the rule of law in Moldova" project that was funded by the Federal Foreign Office. The project defines two main points: cooperation with the members of the judiciary and with judicial institutions, as well as support in establishing administrative courts. On the first focus, the IRZ implemented further training courses for members of the judiciary in civil and criminal law. The measures of the second focal point concentrated on continuing the consultation on the Moldovan Administrative Code, the drafting of which the IRZ has been supporting with expert assistance for several years. The draft is now to be introduced to Parliament.

Aiming to strengthen the rule of law, as well as cooperation between civil society and the judiciary, the IRZ continued to place a further focus this year on the consultation on the law on notaries and lawyers, by means of which it promoted young members of both professions.

Supplementary studies on the introduction to German law, which were taken up in cooperation with the State University of Moldova in 2014, were successfully continued this year.

Further training courses for members of the judiciary, lawyers and notaries, and consultation on the creation of administrative courts, will continue to form the focus of cooperation with the Republic of Moldova in 2016. It is planned here that the further training activities for legal practitioners are to become even more practice orientated. In the field of legislation consultation, the IRZ wishes furthermore to commence drawing up expert reports on the draft of the Moldovan Authentication Act and of the Moldovan Code of Criminal Procedure. It will be necessary to observe the development of the political situation, which is vital in order to set further foci and for the exchange of expertise with the partners concerning the reforms.